I have always judged a book by its cover, and I mean that in a literal sense.

As a child I would scan through the junior fiction at fantastic images, devoid of narrative context, and wonder what possible series of events could lead to the breathtakingly improbable situations rendered before me. Folding back the creased cardboard cover I would often find the barrage of text a disappointment and I soon realised that what I was actually looking for within was more of the same attention capturing and fantastical imagery.

Comics, I believe they are called.

Comics were not the only place to feed by hungry brain.  For someone with a distinct bias for visuals, the video shop was an art gallery. Like the images discovered in the library, VHS covers promised much but had a greater chance of delivering once that cover had been traversed. But more than just a captivating image, the rows of videos had two numbers set against a red circle that told me there were things beyond the covers that would fry my tiny mind. An eighteen certificate wasn't a warning, it was almost a dare.

As a child the prospect of bloodletting was something that scared me, but even then I was fascinated with why it scared me. It always felt like something I would need to overcome and although I eventually did (I have Robocop to thank/blame for that) I was vary wary of potentially violent films. I would sometimes dip my toe in, yet sat mostly on the pool-side in a position of safe curiosity. As such, there are some films that promised so much violent debauchery I was never able to make it past the cover.

Over the years I have sought some of these films out to see what I was missing and in most cases they have not lived up to what my imagination had conjured, irrespective of the quality of the film.

There are a couple, however, that I have yet to see. To begin with this was accidental, however part of me feels like never seeing them so as not to dilute their potency and in order to preserve that ever weakening link back to my childhood.

The following five VHS covers both excited and terrified me, and still kind of do. I imagine they will do neither for you, but I hope to explain why they hold a special place in my psyche. 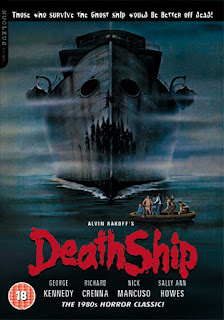 Being on a sinking ship concerned me as a child. More specifically, it was the thought of looking under water and seeing the ship I had previously been on disappearing into the depths of the ocean. To see something so big rendered so small only served to remind me of quite how insignificant and delicate the human race is. So by adding a big scary face on the front of the ship they are just rubbing salt in the wound. I can only imagine he's some sea-bound relative of Thomas the Tank Engine, banished from the island of Sodor for a series of unspeakable tram assaults and driven insane and hungry for human flesh by the isolation. I doubt the ship actually has that face in the film and judging by the screenshots of a papier-mâché head and George Kennedy looking like he's just trapped a bollock in a drawer I can't imagine the film is going to live up to the promise of the cover. 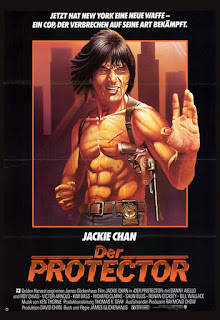 This may seem like an odd one. I'm aware that Jackie Chan, despite being an adept martial-artist, has managed to somehow cultivate the image of being fairly harmless. But I had never seen a Jackie Chan film. I couldn't contemplate what kind of violence this man could unleash with his bare hands that would warrant an 18 certificate. I was convinced this film was going to be ninety minutes of him ripping out lungs and breaking spines. Now that I'm older I imagine that it was the usual BBFC assumption that despite martial arts taking a lifetime of study to perfect, children would instantly master the basics of Wushu upon watching this film and unleash martial hell across the playgrounds of Great Britain. 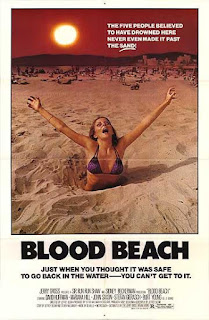 There was something off-putting about this image and I'm not talking about the appallingly garbled Jaws referencing tagline. The faded colours, the lifeless and unnatural posing of the lonely model and the blood-red sky creating a weird, almost alien, ambience all added to an image that made me feel bad deep down inside. Then there is the thought of thick liquid blood mixing with coarse, gritty sand. I could almost feel the stodgy congealing mess forming as I looked at it. Then we get to the overt subject of being sucked under the sand, subverting a safe childhood place and turning it into a place as dangerous as the shark infested ocean. As an adult I think it looks kind of fun but as a child this poster just made me feel utterly wrong and generated a genuine sense of foreboding in me. Young me did not like this image, yet could not stop looking at it. 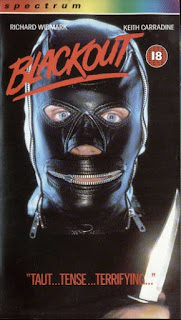 I must have been seven when this film was released and I’m pleased to say that my upbringing was conventional enough so that at the time I had no idea what a gimp was. Regardless, I knew this guy was not a nice person. What really tops it off is the fact the zip across the mouth forms a slight smile clearly suggesting a perverse pleasure in the horror he is about to perpetrate. Still creeps me out. 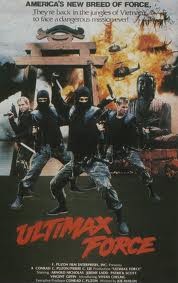 How can this not be the best film ever made? It has ninjas, but they are also in the army. Army ninjas. Read that again. Read it? Good. Well guess what? I'm going to stake my credibility on a reckless prediction and say that this film probably isn’t the best film ever made. That being said I certainly thought it looked like the best film ever made. In fact I wanted to see this film so badly as a child that I cursed it for being an 18. By the time I was old, and brave, enough to start watching films that might draw blood it had vanished from the shelves of the video shop. Over time the name of the film faded from my mind (primarily because half of the title is a made up word). The only thing that remained was an insanely accurate mental image of the cover. Since the internet was created I have been looking for this film and I'd almost given up hope. In fact I was preparing to draw the image from memory so that I could finally publish this article. But would you believe just a day ago I discovered the image and it is exactly how I remember it, right down to the head band on the guy on the far left. Of all the films featured in this article this is the one I'm considering watching, regardless of how bad an idea that probably is.

For the most part I still only have a vague idea of what these films are about and in some cases I've not seen a frame of footage. Yet each of these films has made such a huge impact on me that I feel like I have. That speaks volumes for the power of an image and its ability to achieve more than the narrative it represents possibly could.