Mirageman is a Chilean super-hero flavoured martial arts film starring 'The Latin Dragon' Marko Zaror. It is, even by Total Cults standards, an oddity, yet one that immediately deserves your attention.

It is the second collaboration between Zaror and director Ernesto Díaz Espinoza and continues their apparent love for throwing as many genres into a cinematic mixing bowl and seeing what kind of cake comes out. Actually that's unfair, they know exactly what kind of cake is coming for Espinoza has a command of tone rarely seen in films such as these.

The first of their collaborations, Kiltro (2006), feels like a test run for Mirageman. It is part romantic comedy part street-fighting film (think 500 Days of Summer meets A.W.O.L.) and although there are moments where the subversion of genre conventions by the sudden introduction of another genre plays really well, it mostly comes off as unfocused. It is a film where the romance isn't quite as charming as it should be and, for a marital arts film, you are made to wait some time for a decent fight to come along. When it does, though, it's a cracker.


The film is an interesting failure and one that intrigued me enough to want to keep an eye on this duo. I'm very glad I did.

Mirageman does much the same, veering from a sweet story about brotherly love, to ludicrous superhero film, to flat out comedy, to dark vigilante drama and referencing (either visually or tonally) everything from the Spider-man TV show of the seventies to Taxi Driver. And it is all shot on video.

Doesn't sound like it should work does it? Yet Espinoza's delicate touch eases each tonal shift with such lightness that you are carried away in this journey.

Their third, and to date, last collaboration Mandrill (2009) is their ode to James Bond and one I have yet to see. Unfortunately these films take a bit of tracking down and while Zaror has dabbled in a few straight to DVD marital arts films, including the surprisingly very good Undisputed 3 (Isaac Florentine, 2010) Espinoza has little else lined up.

Mirageman is well worth your time and a proof that genre bending can work and not just as a cynical gimmick to appeal to a wider audience, but to genuinely create something new and exciting. 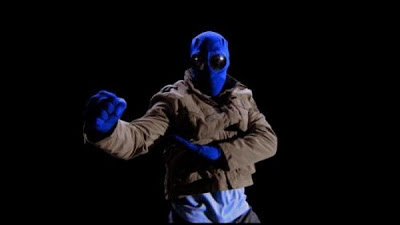