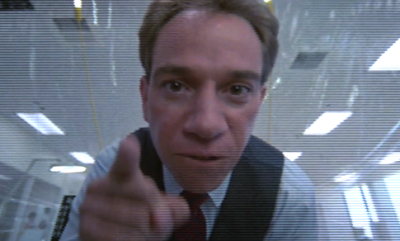 Seeing films as a kid was not quite as convenient as it is now. If your local video shop didn't have it in its limited stock (and if someone hadn't booked it out already) you'd have to wait for it to eventually turn up one of U.K. TV's four channels. BBC 2 and Channel 4 were, at the time, a little edgier but pitched at an ever so slightly more niche audience. As a result they would have the cool, obscure indie/arty/cult movies while the bigger movies would end up on BBC1 and ITV. Because these channels were watched by a much wider audience they acted more cautiously with content. They'd have no problem screening Bond strangling topless women at 3pm on Boxing Day but when it came to blood, boobs and rude words the scissors came out. Ultimately, if you wanted to see a big, adult orientated movie on channels 1 or 3 you could expect it to be in ribbons.

Violence was easy to edit out, as was sex, but swearing was tricky especially when vital exposition, character moments or gags were marbled with swears. The solution, it appears, was to dub the actors voices with less sweary versions of the lines. As you might expect these were not well judged or subtle changes, but foghorns of awfulness parping their ineptitude over finely tuned performances. I'm not sure of the origin of these edits (they may have been airplane versions, cut for American TV or perhaps even studio sanctioned re-edits) but ITV in particular had a penchant for screening hilariously neutered versions. Here are three that have stuck in mind all these years.


Bill Paxton's Hudson is a delight and a character only he could realise. His voice, all volume and no power, created a noise that communicated a level desperation and panic not there on the page. When Ripley and Hicks decide to nuke the planet Hudson tacks on a whopping great "Fucking A!".  On paper that's just a jarhead exclamation point, a "let's stick it to the bastards" bit of fist pumping. But delivered in Paxton's perfectly cracked whine it becomes a call of desperation, a guy so scared he leaps on any suggestion of positive action as if it is his only hope without actually thinking whether it's a good idea or not. Paxton turns it from a high-five to an open window to this character through which we can see his shattered will. So of course some random voice actor in a sound booth can nail it just as well right?

The "Frigging A!" that is smeared over Paxton's aural perfection not only botches the line but undoes the impact of the whole scene. Firstly, a guy that desperate is not going to be careful about his words. Choosing to swap the word out for something safe tells us that Hudson might be on the brink of collapse, but not enough that he might let out an expletive. It's made worse by the misfire delivery as the precision wailing has now turned into something that sounds like a bad Australian accent. Y'know when someone tries to do an Oz accent by hilariously saying they are going to place a prawn on a barbecue? Sounds just like that. Say "Friggin' A!" in your head in that voice now... done? That's what it sounded like.

Ultimately if you want rid of that word then cut the whole line. Don't worry about staying as true to the script as you can, but stay true to the tone of the scene. Leaving on "it's the only way to be sure" gives the scene weight, while topping it with what sounds like a boozed uncle doing an impression of Harold from Neighbours undercuts it somewhat.


For all the explosive ordinance in Die Hard's armoury it's most well-stocked weapon is a barrage of F-Bombs. So while the scissor wielders can snip shots of knees exploding as happily as they like the swear count causes all kinds of issues. My favourite moment is Bill Clay finally revealing himself as a pistol wielding Hans Gruber only to be double-bluffed by McClane's foresight in handing him an unloaded gun.

It's a nice throwaway line delivered with superbly judged indifference, functioning as an brief explanation of McClane's awareness as to Gruber's real identity and an indirect jab at Gruber's ego. The dubbed version, however, doesn't work quite as well.

When faced with the replacement of a fuck the censor has a number of options to choose from. 'Freak' and 'Frig' tend to be the conventional choices (though let's not forget Lethal Weapon's out of left field 'funsters') but even those could be construed as too aggressive. And why would a TV channel want a movie about a guy covered in his own blood blasting his way through terrorists to come across as aggressive? Thus, the new line is:

Delivered by someone attempting a Bruce Willis impression but actually sounding like Carl Spackler it robs the line of intent and function completely. It also sounds stupid. Of course if you want to re-create the experience of watching a horribly edited swear-less version of a Die Hard movie just watch the original cut of Die Hard 4.0 (Oooh, Zing!).


Depending on your perspective the TV edit of Robocop is either an offence against art or a masterpiece of unintentional laughs. There are so many choices of lines, almost too many.

Some kind soul has put this particular movie's best edits up on YouTube so have a look while it's still there.

At the time I was horrified that TV networks would butcher my most beloved movies this way but now, where TV is a landscape full of swearing, nudity and extreme violence, this all seems like a quaint practice not unlike a kind-hearted relative placing their warm hands over your ears to protect your innocence. As such I can't help but think back on these hack jobs with some degree of freaking fondness.