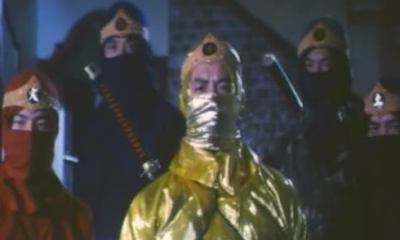 Holy shit this might be the best ninja movie ever made. Ex-ninja John is now a cop and swans around with his giant of a partner dressed like they've just wandered out of a side-scrolling beat 'em up. After a grilling from their cliched Captain (who also happens to be a massive racist) John is framed for the possession of drugs and imprisoned. John uses all of his ninja training to escape, clear his name and find out what connection his predicament has to an elite and deadly clan of ninjas.

By traditional film making standards Super Ninja is a shoddy piece of crap. The story barely makes sense, the script is appalling, the performances from both the physical actors and those dubbing them are wince-inducing and the only female character exists almost entirely to be leered, fondled and shoved around. If you have been following these pieces, however, you will know that I assess ninja movies with my own specific set of criteria and quality isn't one of them.

Super Ninja ticks so many of my ninja movie boxes it's insane but what really earns this movie points is our central ninja clan the Five Elements Ninjas. Adorned in colourful outfits these warriors possess powers in line with their elemental namesakes: Water - can breath while submerged, Fire - can shoot fireballs, Wood - can climb trees really well, Earth - can travel underground like Bugs Bunny and Metal - can dress from head to foot in Christmas wrapping paper. The action sequences in the movie are genuinely thrilling with some considerable martial arts skill on show, some inventive choreography, just enough gore to make the stakes feel high and cinematography that elevates the action.

It also contains a number of frankly bizarre moments, including some cartoonish post explosion soot-covered gurns, the biggest cheeked skeleton you'll ever see and Earth leaping out of his costume and into the ground, only to pop out somewhere else dressed in only a nappy and a Hitler moustache. And then there is the sex scene! Sex scenes in movies like these tends to be two shirtless people moving their open mouths near each other's necks for a while. In Super Ninja, though, they really go for each other's nipples. I mean almost too much attention. It's as if the participants had been told the key to ecstasy is to use your tongue to play Track & Field with your lover's areole. This nippular abuse plays out with soft saxophone music and, I guess, a degree of tenderness. Until the music changes to a cue that belongs in a Sonic The Hedgehog bonus level and we are treated to sped-up close-ups of arse fondling and screams of ecstasy that sound like trapped animals.

Oh the music, I almost forgot. This movie has one of the most iconic scores ever heard, primarily because it's been nicked from a load of other movies. This quilt of a soundtrack features cues from Dawn of the Dead, Deathwish 3, Psycho, Star Wars and Raiders of the Lost Ark. And these aren't subtle lifts but uses of tracks like The Murder (Psycho), The Battle of Yavin (Star Wars) and Desert Chase (Raiders).

Super Ninja has pretty much everything I want from a ninja movie, some memorably weird moments and I dig the whole Bad Dudes Vs. Dragonninja vibe. It's as gold as Metal's pyjamas.

Wondering what the hell you just read? Check out the introduction that explains everything you need to know about this column here!