The Many Appearances of The Phantom

Heavy with humidity and strangled by mist the depths of the rainforest are a foreboding place for any foreign to its treachery. And yet for those there to loot the riches of ancient tribes or exploit their customs for nefarious purposes the deep green threat of the jungle is the last thing to worry about. Should you defile the laws of the jungle your concern should be focussed only on one; an immortal spectre, a vengeful phantom, a dude in a bright purple leotard. Wait... what? 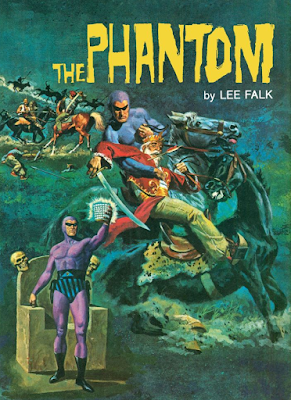 The Phantom has always been something of an unintentionally comic figure. A jungle-dwelling adventurer dressed not in camouflage or rugged climbing gear, but a brightly coloured spandex onesie. Galloping around the jungle on a massive white horse and followed by his pet wolf The Phantom is the definitive sore thumb. His less than covert approach to jungle justice in most widely known from the '96 Bill Zane vehicle that came on the heels of two early nineties period superhero flicks The Rocketeer and The Shadow. It appears that The Phantom, though, is not merely immortal in his stories but as a pop culture character as well.

Conceived by Lee Falk in 1936 The Phantom appeared in newspaper comic strips on and off until Falk's death in 1999. The Phantom also appeared in a series of books and in more recent years an array of comic series produced by multiple publishers including DC, Moonstone and Dynamite. Of course all manner of comic book heroes have stood the test of time but the purple pirate puncher has also had as many screen adventures as some of the A-list superhero superstars.

The “Ghost Who Walks” first walked in front of a camera for the Columbia cliffhanger serial of 1943 which featured a pretty accurate costume and some fantastic nail-biters including falling in quicksand while being menaced by a tiger and being shut in a primitive octagon to go hand-to-hand with a killer gorilla! This 15 episode romp is an absolute joy (despite some patience-testing faffing in the first few episodes) and a bloody faithful adaptation to boot. 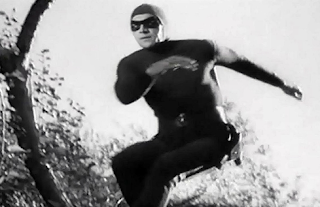 Less known is a 1961 pilot for a new series that featured guest turns by Richard Kiel and Lon Chaney Jr. Our hero looks like he stepped right of the cover of his novels though the episode isn't exactly thrilling. An early fight with a crocodile is exciting but ultimately it is absent our hero for too long. I picked up a version at a convention (though it is now viewable on YouTube) but since this was effectively a “lost” pilot the footage is black and white, washed and grainy. In fact it is poorer quality than the adventure serial from twenty years earlier. 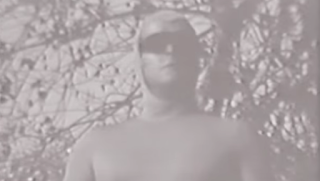 The Phantom next appeared in the mainstream in the awesome/awful cartoon series Defenders of the Earth where he and a group of other awesome/awful heroes fought Ming the Merciless and his army of ice bots. Someone really should/shouldn't follow the trend of making 80's cartoons into movies as this would be a great/terrible idea and would make an awesome/awful blockbuster/flop. 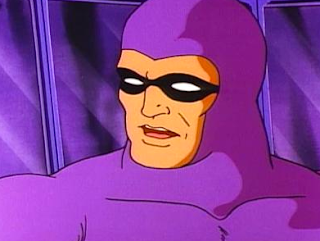 The Phantom got his second shot at an animated adventure series in The Phantom 2040 which I have yet to see and a Sega Megadrive/Genesis game of the same name that I haven't played. Billy Zane then donned the purple pants for his movie and believe me I saw the shit out of that. I seem to be in a minority but I think the costume looks great and the action, especially the cliffhanger elements, are brilliantly staged. 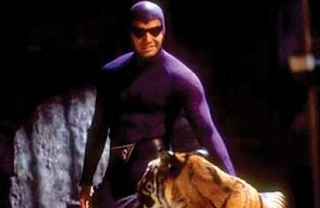 The Phantom's last on screen appearance came in 2009 and served as a kind of precursor to Arrow. Modernising both the mythology and the outfit this series turned the jungle dwelling hauntist into a free-running teenager. At least that's what the trailer indicates. I never watched the thing, y'know... because of all the things in the trailer. 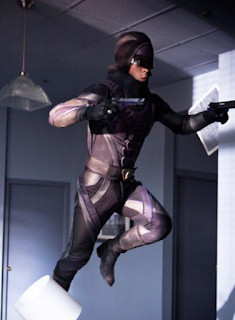 Although this seems like a fairly standard cinematic trajectory for a superhero the amount of times he has appeared on screen is odd considering most movie-going audiences won't have ever heard of him. This is not the case elsewhere in the world, especially Australia. Not only can a motorcycle gang member be seen reading an issue in Stone so recognisable to a mainstream audience was the Phantom that Oz rib tickler and large knife expert Paul Hogan decided it was a safe bet to run this sketch in his series:


There is also a Phantom Land in a a Swedish theme park where you can visit the famed skull cave and meet the man himself! 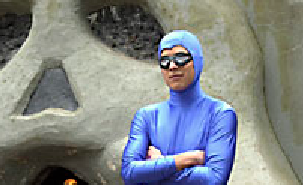 So why is such a bizarrely conceived crime fighter so unwilling to roll over and die? I can only speak for myself, though even I'm not one hundred percent sure. What I do know is that this character is deeply rooted in some of my childhood fascinations, such as:

When I saw The Phantom grace the cover of a DC comic a connection was formed that has never broken. Here was a stroke of vibrant purple against a landscape of greens, a hero draped in a traditional superhero outfit, not pasted against the New York skyline but fighting pirates and tomb raiders over chasms and collapsing bridges. An unknown spectral avenger; colourful, thrilling and new.

As an adult I love the sheer boldness of the choices. Comicbook superheroes are allowed to defy sense. Their gaudy costumes and absurd antics are joyful flights of fantasy that, over the years, have been neutered to fit them into the darker, more sensible world view of an audience unwilling to just roll with it. That's not an underhand criticism of modern superheroes, far from it. Yet there is a part of me that longs for colour and adventure, for the sheer joy of imagination and excitement. And sometimes, as a po-faced jungle chokes me, its seriousness forcing me into unconsciousness, I spy a streak of purple and I know “The Ghost Who Walks” is there. I also know he's not going anywhere anytime soon. 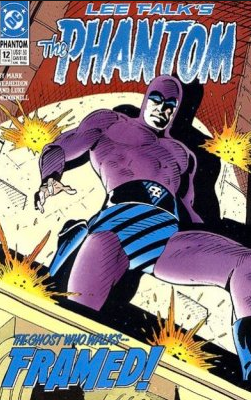