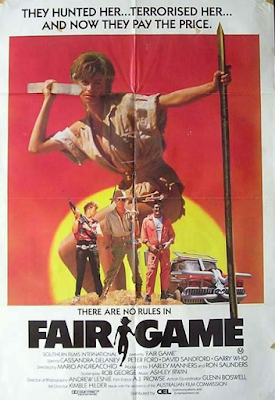 Those of you who have seen the documentary Not Quite Hollywood or have skimmed the rim of world genre cinema will be more than aware that Australia is renown for being a throbbing artery of B-movie mayhem. So much so that the films produced throughout the 70s and 80s have become affectionally known as Ozploitation. And so with that one label Oz joins black, sex, car, (probably dog) under the umbrella of exploitation. My issue is having now watched a bunch of these movies I'm not sure that label is entirely accurate.

As a term Exploitation is loaded with negative connotations and is used as much to dismiss movies as it is to celebrate them. You can go ahead and assume, based on the subject of this blog, that I'm of the latter yet I'm well aware then generally exploitation is regarded as several rungs below “proper” movies on the cinematic ladder of worthiness. It's bullshit, yes, but not just because of elitism. So many movies have found themselves labelled as video nasties, or exploitation when they really aren't.
Common signifiers of exploitation movies are brazen approaches to sex, violence, morality and yet all of those things can be found in abundance in the Dirty Harry movies and we all know those as classic crime movies. Killer animals goring nude swimmers sounds like Grindhouse gold but that's how Jaws opens. Of course both those movies had named actors while exploitation is associated with small budgets and a lack of star power but the truth is the parameters for defining an exploitation film are flimsy at best. Knowing this going into a season of so called Ozploitation films meant I should have been expecting a couple of movies to transcend that barrier, yet what surprised me most is how few of the movies I saw even registered as exploitation to me.

Let's tackle the subject of cheapness head on and begin with the movies that encapsulate Australian genre cinema the most. Mad Max is the closest of the four films to a bonafide exploitation movie. Its brutal and edgy but doesn't necessarily drip with production value. The sequel's frame bulges with production value, however, despite taking place in much the same environment. And this is an important point to note: as much as shooting in the outback might be more cost effective (and I admit I'm making an assumption here) shooting on that kind of background can produce the same scope as the great romantic Westerns. The run down shacks and rusted factory remains would cost a production team considerable time and money to replicate whereas it's not too great an assumption to make (again, admittedly) that these great bits of set might just be found lying around. So although a lot of these movies may appear cheap they actually have significant scope and detail.

Of the movies I watched two featured killer animals and could therefore feasibly end up on some 'Grindhouse Creature Feature Classics' double-disc set, yet neither even come close to being traditional exploitation. Razorback, next to Mad Max arguably Australia's most notable export, comes close but oozes with the incredible location work afforded by an expansive landscape littered with evocative debris. It also features ominous caves, armoured hunting vehicles, a menacing processing plant and a massive rubber pig that, not unlike Jaws' Bruce, features limited articulation and is therefore kept from any full reveals. Yet what Director Russell Mulchay lacks in subtlety and storytelling he makes up for in atmosphere meaning that his killer animal movie is nowhere near as engaging as Spielberg's yet actually looks more expensive. It's gaudy colours, smokey dream frames and disorientating editing makes it a gorgeous movie that is difficult to forget.

Killer crocodile movie Dark Age, on the other hand, looks expensive without the overt stylings of Mulchay's porker and not because of a desert setting either. Crowds scenes, fancy restaurants and immaculate apartments all feature as backdrops and at no point does the movie ever appear like it is faking a location or making do with whatever is available. It has a fairly progressive environmental conscience, a pretty bloody convincing giant croc, some beautifully stylised Burtt-esque punch sound effects and a car chase involving a truck with a giant reptile on its back. This is a solid, crafted, expensive looking movie that goes cheap with neither the production or its thrills.

Of course car chases are prevalent in exploitation films. Everyone likes to see a motor bite it on the tarmac. Every glowing review of Schindler's List mentioned how the lack of a cartwheeling Vovlo stopped it from being “truly great”. EVERY SINGLE ONE. Luckily it didn't cost all that much to tumble a banger on a dis-used stretch of road, especially in the 70s, so it was a crowd pleaser that movies at any production level could afford, even Troma by fuck.

And if Mainstream movies were John Cleese, B-movies Ronnie Barker and Exploitation Ronnie Corbett, then Troma is surely the tragic monstrosity with a wooden eye, a hair-face, teeth on its tongue and a snake of black vomit slithering down its hessian bib snorting and dry humping Corbett's workman's boot. True, Troma only had one car crash and they used it in every fucking movie made after they shot it, but my point still stands.

Most trailers of Australian movies feature vehicular carnage of some sort. Nuclear Run AKA The Chain Reaction, for instance, puts its muscle car showdown front and centre yet this scene features only in the film's final moments. The movie is actually a thriller that deals with both corporate greed and environmentalism as a couple having a raunchy weekend in a log cabin discover the area has been contaminated by a power plant leak and must fight against the corporation who quarantine them while trying to cover the whole thing up. From the trailer Dead-End Drive In appears to be a demolition derby set inside and an open air cinema but actually its big car moment is just a moment. Most of the movies feature car chases or crashes at some point and often feature modified motors. No doubt these moments were featured in the trailer to capitalise on Max's success around the world but the use of cars really comes from a culture born of necessity. How else are you going to get around the outback? 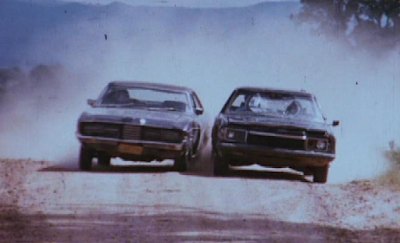 Nudity featured in a lot of the movies I watched, but unlike the usual sordid female flesh served up for male gazes the nudity was often de-sexualised and evenly balanced between male and female. Nuclear Run's nude swimming scene gifts its viewers with a penis alongside the expected breasts while the decontamination sequence, featuring the same couple parted by a plastic water speckled booth, is shot in such a way as to make their nakedness appear innocent and somewhat beautiful. Undercover cop posing as a biker movie Stone replaces cars with bikes and the outback with the suburbs and features a skinny-dipping scene with both men and women that is actually quite moving (emotionally not trouserly, you disgusting filth peddlers).

Then there is Fair Game, a movie that could be easily promoted as an out and out exploitation film featuring an armoured car, a hunted woman, nudity and violence but actually has the engine of any straight mainstream US thriller rumbling under its slightly dented and dust spattered bonnet. 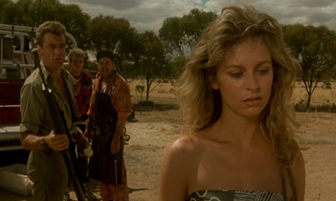 A woman who owns a nature reserve comes into confrontation with local hunters and their one-upmanship spirals until she becomes their prey. It is ultimately an adult Home Alone style siege piece that looks exquisite and features the increase of beautifully crafted tension until it reaches its unbearable peak. Of all the movies this seems to have the most problematic nudity as it is entirely female and voyeuristic. Its most problematic sequence, where the female lead is strapped topless to the front of the hunter's truck and driven round in circles, immediately made me uncomfortable. Yet that might have been muscle memory trained from so many US exploitation movies. Ultimately it felt different to all the images of naked women in peril in Roger Corman's girls in prison flicks. This scene genuinely felt like there was no expectation I'd find some perverse pleasure in the images I was presented with but rather it was using nudity in the way that a lot of exploitation film makers claim to use it; to suggest vulnerability.

That's not to say that Australia doesn't produce exploitation movies. Blood Camp Thatcher is as crazy as its trailer would suggest while Midnight Spares feels like a Corman American Graffiti cash-in (of sorts) but generally the movies I saw looked well produced, crafted and weren't saturated with the lurid taboo nudging that American exploitation movies were so fond of.

Exploitation is not a badge of judgement, rather an indication of what you should be looking to enjoy from the movies that wear it. So I am by no means suggesting the term Ozploitation is unfair, I'm just saying that for the films mentioned above it's mostly incorrect and as such my expectations have changed ready for the next season of Australian genre movies I plan.