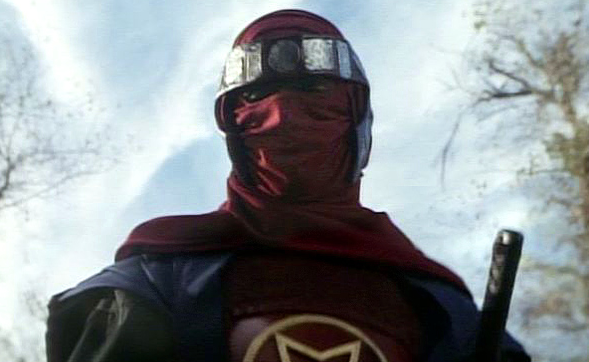 Chuck Norris discovers his adopted brother Seikura is training terrorists and mercenaries in the secret ways of the ninja and completely loses his shit. Travelling to their secret training base known as The Octagon, Norris sets about handing Seikura and his ninja army their arses.
It takes a little while for this movie to get going but when it does it has a lot to offer. The conceit of using an echoey voice-over to represent Chuck's thoughts is a constant pleasure. Watching him look around a room with a confused expression on his face while he whispers a variety of questions to himself never fails to raise a smile. There is a parade of famous (or soon to be famous) faces including Lee Van Cleef, Ernie Hudson and Richard Norton. He also has a friend with a superb lion's mane, but the movie gets no points for that.
It does get points, however, for its ninja heavy finale. It also gets points for the utterly badass Vader-esque ninja master. The showdown between him and Chuck is not only nicely choreographed it appears that, editing aside, it was shot as one continuous take. The rest of the ninjas are an inept bunch of bumblers who are frequently overpowered by the people they are training and cannot use their intense focus to sense a foot flying towards their face. It does make you wonder whether the rigour of the entry exams has slipped somewhat. One might be inclined to think these ninjas are products of one of Beverly Hills' two ninja academies. As rubbish as they may be they do wear capes on a regular basis so they're alright in my book.
It might be bloodless and suffer from long ninja-less sequences but The Octagon is a relatively original way of introducing these masked killers into a western action movie. This, alongside its excellent fight scenes and carefully measured amount of batshit crazy makes it a solid entry into the ninja canon.

Notable Ninja Kills – Shuriken to back of neck, blowdart to throat, throat slit, bolt in the heart

Ninja Mythology - Some ninjas are just fuckwits in balaclavas.