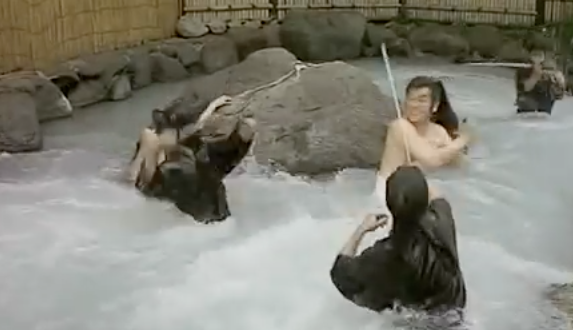 Chased from his Spanish home the spontaneously hirsute Count Waldemar Daninsky finds his way to Japan, were he goes on a lupine rampage that can only be stopped by a mythical magic sword. Featuring ninjas, an awesome undead samurai and a werewolf fighting a fucking tiger (some poor stuntman had to wrestle a real tiger in werewolf make-up) this is a gorgeously produced and fun Paul Naschy werewolf movie. Although there are a lot of iconic badass Japanese ass-kickers featured, all using a nice range of weapons, ninjas only pop-up for one nudey bath sequence so don't go in expecting too much masked mayhem. It's a shame as this is another awesome movie scoring low due to a minimal ninja count. I'm beginning to suspect my system is flawed, as if filling movies with ninjas aren't these filmmakers primary concern. No, never doubt yourself or your horseshit scoring systems Gogol...

Ninja Mythology - Ninjas are impatient and not easily embarrassed. It doesn't matter if you're in the bath, on the toilet or knocking one out they ain't gonna wait.

The trailer below seems to have been edited for comic effect and does not represent the tone of the movie: