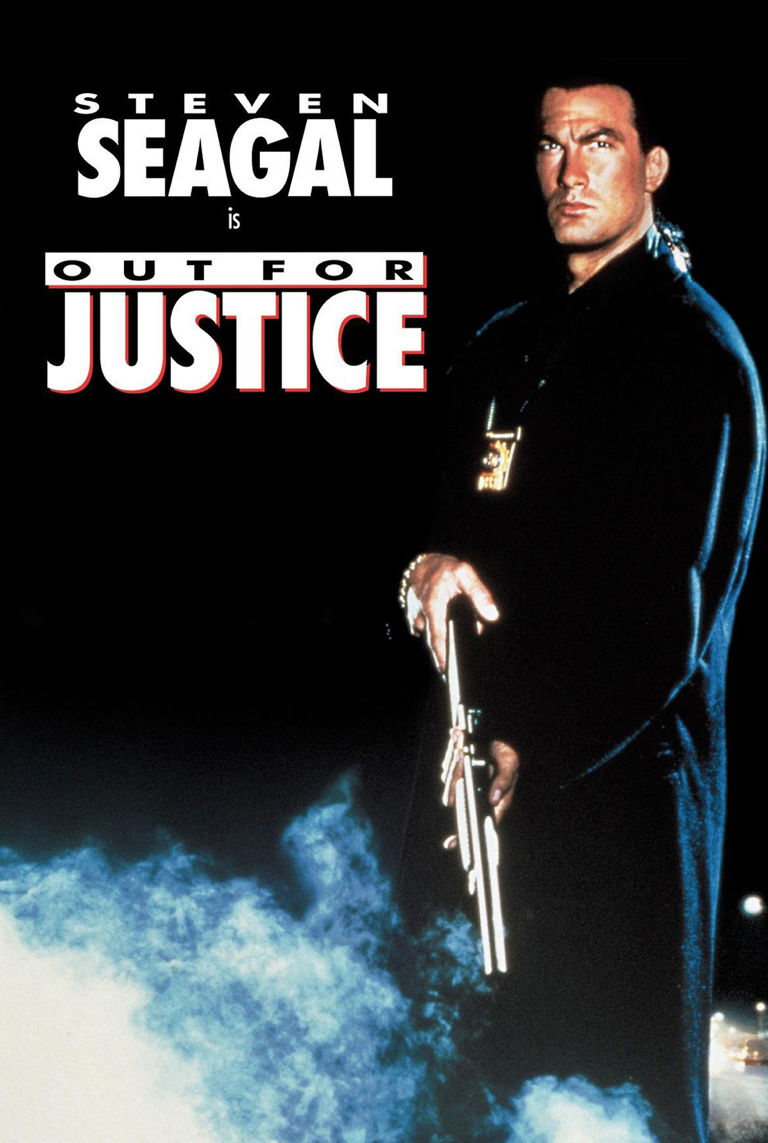 Out For Justice is Cobra meets Goodfellas. I am not for one second going to suggest the film is as accomplished as Scorcese's masterpiece, but it introduces the rhythms of the mob movie in order to make the journey between traditional action movie beats much more interesting.

Crack addled wanna-be wiseguy Richie guns down a cop in broad daylight. Along with his small gang of tracksuit-wearing thugs he then cuts a path through Brooklyn, the unravelling of his sanity and self-control accelerating the body count of those that try to stand in his way. The mob wants him dead as much as the cops want him in jail. Steven Seagal's Gino Felino, an old friend and partner of the executed officer, wants him even more. And so Felino vows to hunt Richie down and bring him to justice. So far so conventional.

Out For Justice is littered with cliches, but they are dismissed as quickly as they are thrown at us. Seagal's character is a recently divorced one man army of a cop who takes no shit and dispenses brutal beatings well outside the parameters of his authority based entirely on his own sense of right or wrong. As such you'd expect the usual friction between him and his superiors, especially when flat-out asking to hunt down and kill a man. When Felino talks to his Captain about going after Richie ("Give me an unmarked and a shotgun") he receives no resistance what-so-ever. Even the Mob, who want to get Richie before Gino does, are generally co-operative and helpful even when being insulted by the renegade cop. The familiar beats are discarded as quickly as possible in order to get to the movies main purpose: To set up Richie as an utterly despicable character so that we can enjoy seeing him taken to pieces in the final act.

The stakes are really small in this movie centering on loyalty, family and tradition more than they are global terrorism or a plot to pull off the biggest heist ever. To keep the momentum it needs the movie adopts a very loose approach to performance. Characters don't (always) blurt out hack cop-speak, but converse in a naturalistic, even improvisational, way. Seagal has never been a great actor but has always been comfortable delivering dialogue naturally. Here he riffs with Italian mobsters without a problem, bringing intensity and humour into the role without it ever feeling forced. Casting actors like William Forsythe and Gina Gershon help sell this energy and having The Beatsie Boys on the soundtrack also helps a little.

There is a scene half hour in that epitomises this mix. Felino walks into a bar looking for a lead on Richie. It's the old 'cop beats up a bar of thugs' scene but is again handled in a very different way. Rather than take on everyone in a sustained action set-piece Seagal works the room, using his size, presence and charisma to hold the attention of thugs and audience alike. As a cop he is a violent brute and one you'd probably want on 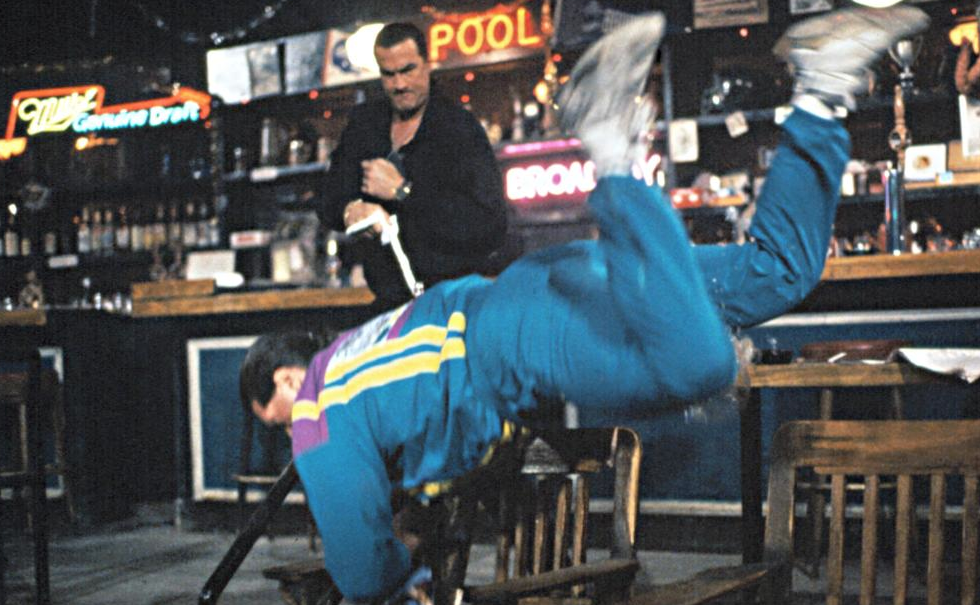 charges himself, but in the movie world there is great joy to be had watching him interrogate and humiliate these career criminals. Shit gets real when a slick-hairded wiseguy calls him out for hiding behind a badge and a gun. Felino empties his clip on the ground and tells everyone the badge is their trophy. One-by-one Felino is attacked, fending them off with pool cues, a hanky full of pool balls and whatever else comes to hand. It's familiar territory but handled like a Tommy DeVito tantrum. Even Felino's put-downs shy from the usual puns and tough talk, opting to refer to his target as a "chicken-shit fucking pussy asshole" and "a fucking puke who likes to pervert kids and stuff". On paper it's no less ridiculous than seeing Chuck Norris fight an army of bar thugs in Code of Silence, yet it is handled with an eye for naturalism that convinces you he can do this rather than just showing you he can. When Seagal leaves the bar in tight close-up and with a deep electronic heart-beat scoring him, you feel he has earned every bit of his place in the narrative as a tough guy.

Which makes it all the more cathartic when he finally meets up with Richie and destroys him. Felino doesn't even break a sweat making an absolute mess of this awful prick. The guy barely gets to even lay a finger on him. Whatever Richie attacks with (frying pan, rolling pin, corkscrew) Felino uses it against him. It's brutal, nasty and really quite funny, playing more like a Rik Mayall and Ade Edmondson sketch than an action finale. 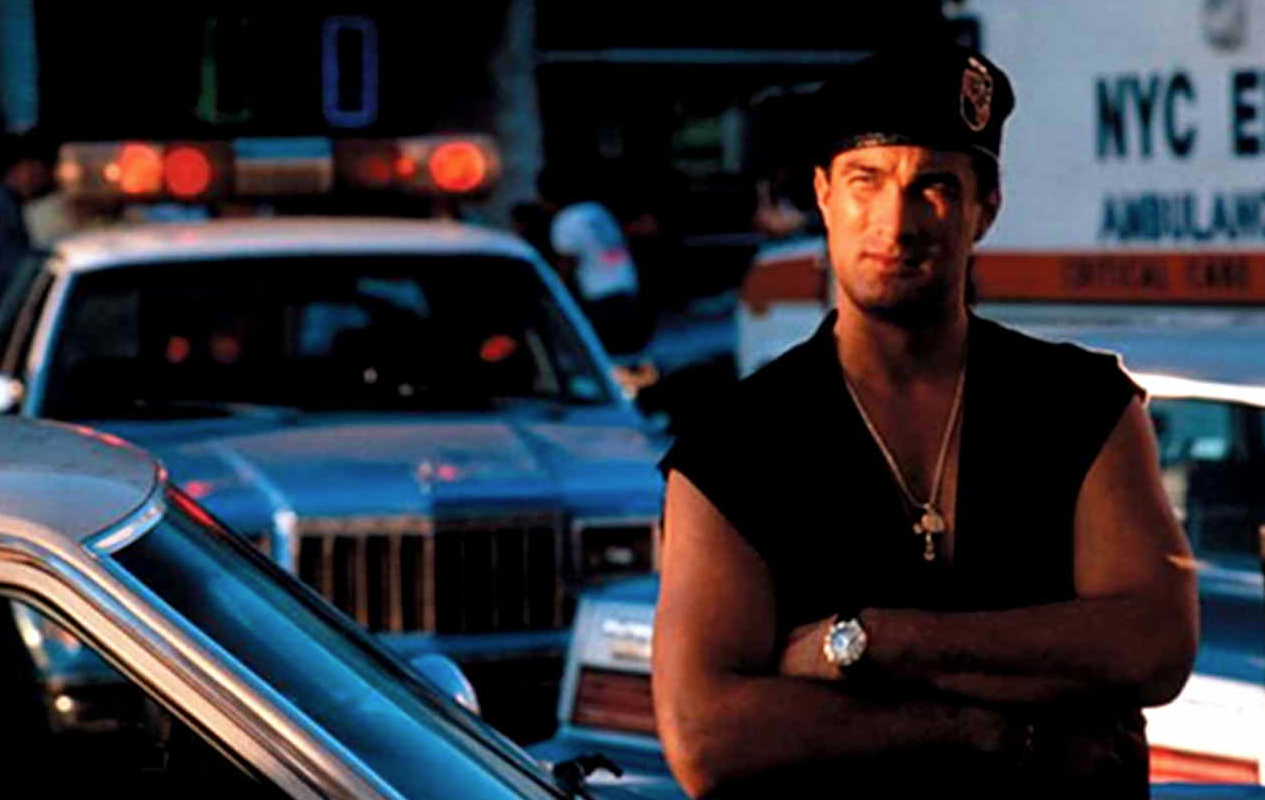 I'm not trying to say this is anything other than an action movie. Ultimately it's just as absurd and politically dodgy as any cop on a rampage flick. The moment Seagal turns up to the scene of his best friend's murder in a sleeveless top and a beret you know what kind of movie you are watching. He even knocks someone out with a sausage at one point. Despite this Out For Justice valiantly tries to legitimise itself and, in doing so, separates itself from other action movies of the time. In the end it feels like a jazz cover of an 80's rock anthem: the melody and lyrics are still cliched and obvious, it just sounds so much looser, personal and natural.