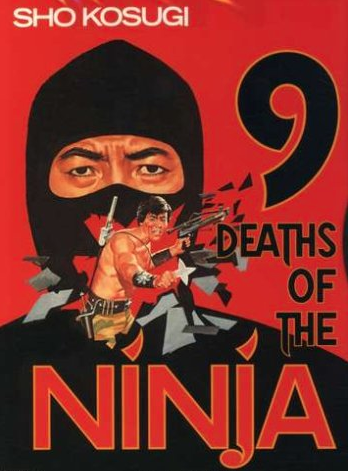 Before we begin let me state for the record that I had a great time watching this movie, but like the shadowy warriors these articles focus on I must be ruthless. As such this movie looses points on a technicality.

Sho Kosugi dons a snug camouflage suit adorned with chrome high-tech gadgets (but no ninja mask dammit) and alongside Gwendolines Brent Huff sets off to rescue a bus full of hostages. This mission involves a strange modern dance-related opening credits sequence, a villainess with MASSIVE hair (Dark Helmet's helmet massive), Kosugi being attacked in a public museum by gang of little people and Huff unleashing the firepower of a massive mini-gun into a jungle. It's a fun movie and one I would have loved as a kid. The violence is frequent, well put together and entertaining but ultimately bloodless. There are rumours of a stronger cut existing somewhere and although that would have added value the only thing that would raise the score of this movie is more ninjas. You see as much as we are told Kosugi's character is ninja he only wears the proper outfit once. There are other ninjas in the movie but their presence is kept to a minimum. It's a shame, because otherwise this is a really fun way to spend 90 minutes of your time.

Notable Ninja Kills – Clawed out of a helicopter and into water, shuriken in eye, explosive shoved in mouth, wheelchair bound villain thrown in front of polo horses.

Ninja Mythology: Ninjas will make you a nice fruit salad if you can tolerate their incessant showboating while doing it.


Wondering what the hell you just read? Check out the introduction that explains everything you need to know about this column here!