There is nothing I like watching more than a wartime romp involving super-powered crime fighters thwarting spy rings and smashing smuggling rackets. That of course is a lie as there are plenty of things I like watching more… my children growing up for example.

However it is hard to resist the charms of this particular super-hero sub genre. The benchmark for these movies is arguably The Rocketeer (Joe Johnston, 1991), a brilliantly produced and charming adventure that is perhaps a little light on the costumed heroics for most of its running time but more than makes up for it with an exciting finale atop a burning zeppelin. Johnston also directed Captain America: The First Avenger (2011), the most recent and possibly most famous period superhero movie. Of course this being Total Cults I won’t be talking about the ones everybody love. So here is my suggested triple-bill of period heroics, most of which are generally considered as a bit shit. 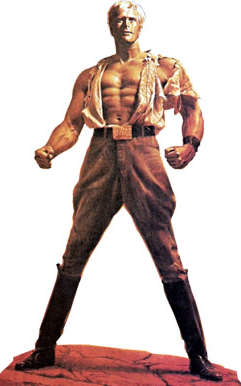 Literary adventurer Doc Savage is a hero with the body of He-man and the mind of The Doctor. He is an expert in every scientific and physical discipline and, along with his five companions (each an expert in their own fields) is thrust into an adventure involving secret tribes, ectoplasmic snakes and a pool of molten gold.

Ron Ely, most famous for playing Tarzan, is cast as the titular hero and is a pretty good fit for the part. Although he’s not quite the grizzled adventurer as depicted in the Larry Bama covers (arguably the most popular visualisation of the character) his likeness to earlier artwork is uncanny. The rest of the 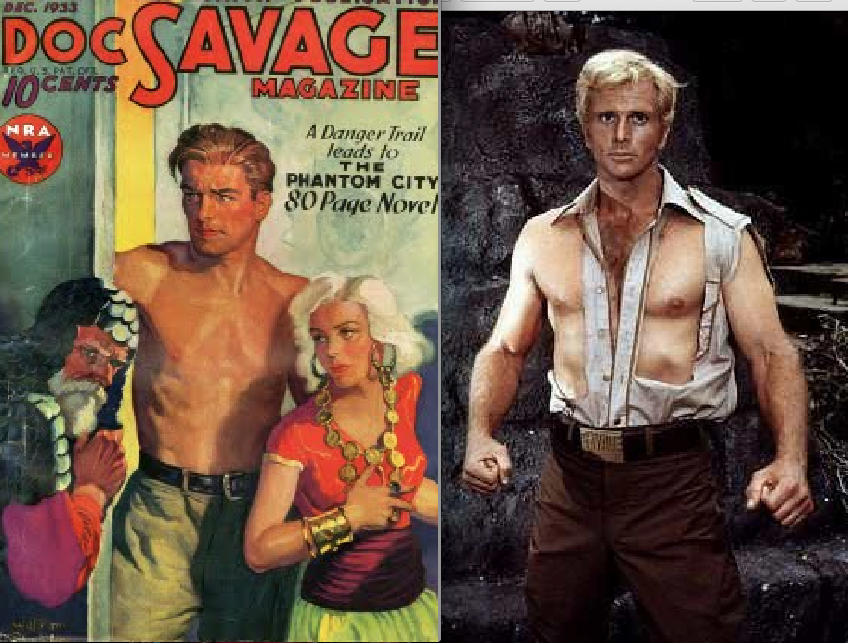 cast seem to have been cast based on physical resemblance rather than ability. This, combined with some very television shooting techniques, means at times the movie feels more like an expensive episode of Columbo rather than a blockbuster adventure

Tonally the film is a little unsure of itself. It is obviously going for the same sensibilities as the 1966 Batman movie, but while that had a specific and focussed sense of humour Doc Savage is all over the shop. Some scenes play silly which makes the more violent moments seem all the more brutal. Some gags fall flat on their face while a couple (the “you're a brick” moment springs to mind) are played so well you wish the rest of the film was that sharp.

There is also a curious decision to leave out some key information. Readers of the books will know that Doc Savage often wears discreet bullet-proof material of his own design, while his lawyer companion, Ham, wields a sword-cane tipped with a tranquilzer. Since the movie never explains these points less informed viewers might find themselves confused when Savage survies a chest full of machine gun fire and when each of Ham’s victims smiles and feints when stabbed with a blade. In fact it looks like the henchman that gets stabbed in the arse is enjoying every minute of it.

All this aside the film is still fairly harmless fun. It gets enough right to be considered a fairly accurate adaptaion and some of it is so bizarre it cannot help to raise a chuckle. Ultimately, it’s a movie that coasts on charm and ends being very difficult to dislike. 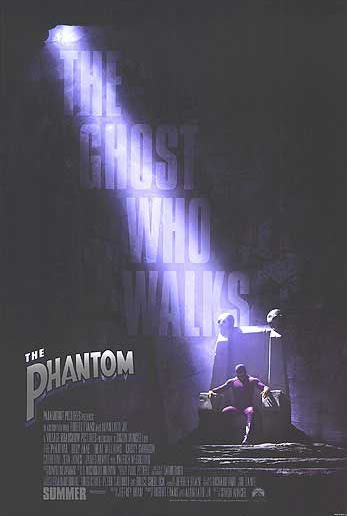 Kit Walker is one of a long line of avengers, sworn to pass down their pistols to each descendant so that they may continue their fight against the nefarious pirate gang called the Tsang Brotherhood. Known as the ‘Ghost Who Walks’ this hero stalks the jungle ready to take on this evil organisation at every turn. Oh, and it’s worth mentioning that despite living in the jungle he wears purple lycra and rides a white horse. 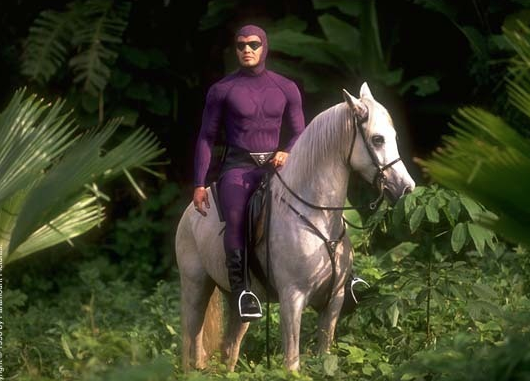 This seems to be the sticking point for most people. Yes, it’s absurd. But superheroes are absurd. Batman is absurd. Who in their right mind dresses as a bat to intimidate mafia bosses? Absurdity is not a bad thing though. The Phantom is unapologetically absurd, revelling in its early comic book tropes rather than trying to legitimise them out of a sense of embarrassment. The costume looks great. It’s textured enough to look interesting close up but without the modern trend of looking too busy. Even if you don’t agree there is plenty to enjoy in this film if you can overlook the heroes wardrobe.

For one Billy Zane makes for a great classic leading man. Handsome and charming he weirdly never looks ridiculous even when conversing with animals and ghosts while dressed in a purple one-piece. The film looks surprisingly expensive with a range of beautiful location work and some fantastic sets. The action is both inventive and well-staged, from some excellent rope-bridge dangling to leaping from a plane onto a horse it provides a succession of thrilling cliff-hanger set pieces and swashbuckling action.

The worst criticism I have is that sometimes the fights can be a little sluggish, but other than that this is a rollicking good adventure movie. 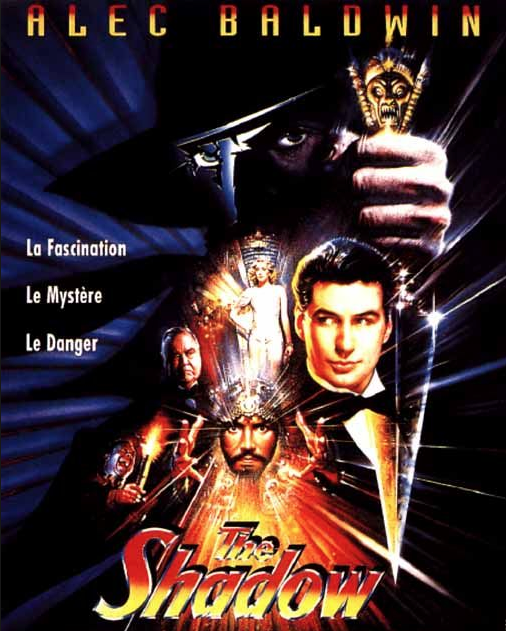 If I haven’t lost you thus far this one might do it. The Shadow is often regarded as something of a turkey and I can kind of see why. Many will claim it is a film that is all surface, trading on production design over and above story and character. It is also a little over-the top at times. True it feels like all of the subtle elements of Burton’s Batman have been ripped away leaving just the excesses yet it never quite goes full Schumacher (never go full Schumacher). It is also strange that despite the hero wielding two automatic pistols there is very little in the way of actual action sequences. Ultimately it does feel like a series of connected set-pieces rather than a cohesive narrative. Still, I think there is a lot to like.

Firstly the movie looks great. Russel Mulcahy has really rung every bit of value out of the various art departments as sets, costume and VFX are all stunning. The shots of the the Shadow’s communication network whizzing messages around the city is either utterly stunning model work or CGI well ahead of its time. 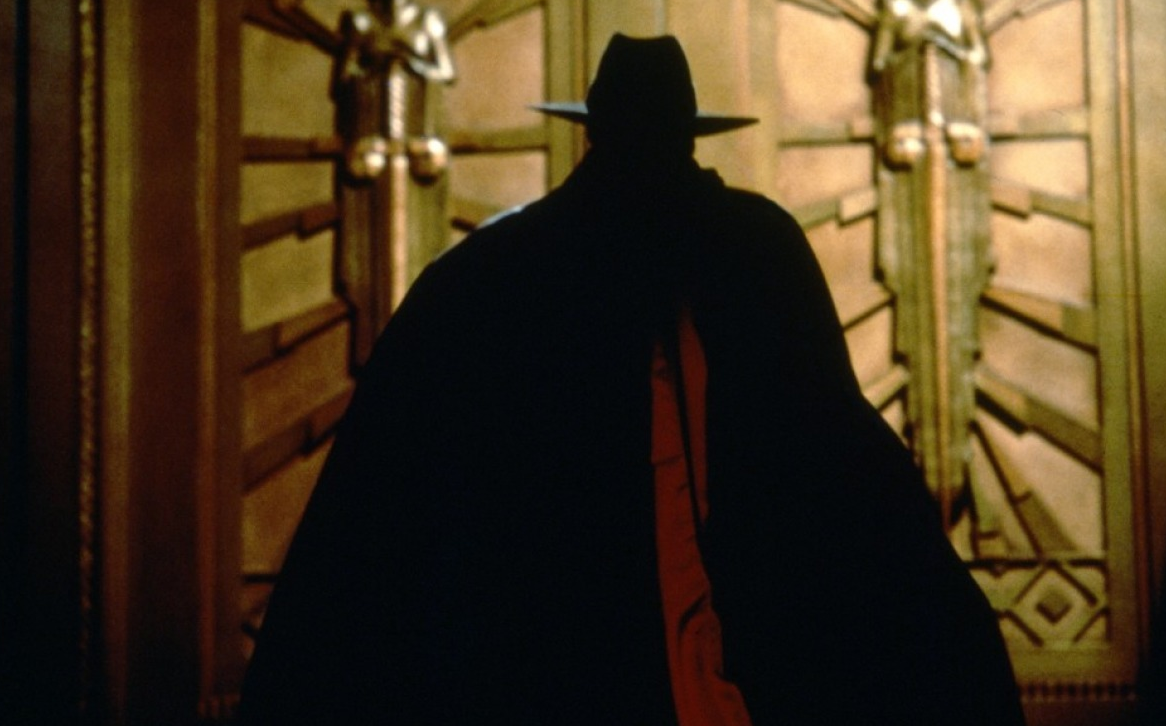 The Shadow also has an edge to it. Our “hero”, the brilliantly named Lamont Cranston, starts the film as a ruthless opium dealer, his powers being punshiment for his awful crimes rather than a gift. The villain’s commupance is deliciously cruel and delivered with a figurative grin so wide it makes the movies intentions very clear: for all their wonderous powers supeheroes are royally fucked-up people. Rather than wallow in this, though, the movie is determined to have fun with. 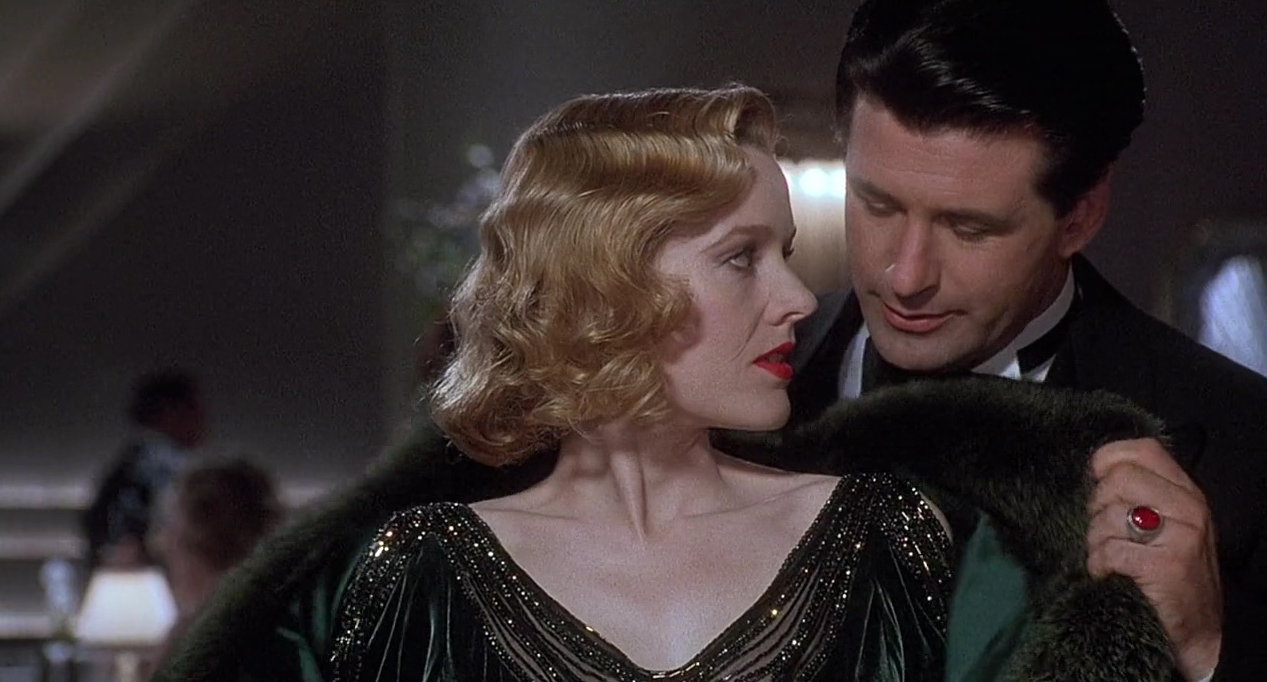 It is this streak of humour is what elevates the movie above its shortcomings. All of the cast seem to get it (although you could argue that Tim Curry over-eggs it somewhat) but it is Alec Baldwin and his ability to balance charm, smarm, chivalry and psychosis while always remaining likeable that really holds the movie together.

So, problems aside, this is a gorgeous looking movie with a wicked streak delivered by a game cast with pin-point accuracy. As much as like I The Rocketeer and as big a Captain America nut as I am, it is these three movies that capture the giddy thrill of the cliffhanger serials they emulate and as such get a regular viewing at the Gogol residence. If you can overlook some wonky tone here and a bit of purple there you might find there are worth a watch too.
Labels: Triple-Bills