Pinball Art (and the Battle Between Imagination and Narrative Logic) 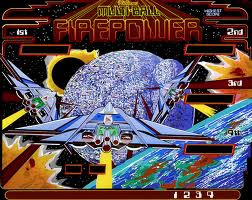 As child of the eighties I frequented the video arcades whenever I got the chance. There amongst the pulsating lights and soft electronic sounds I would be enraptured by the simplistic digital imagery that, for a moment, allowed me to become the heroes I’d worshipped on the page and on the screen. Yet, hypnotised as I was, my attention was occasionally drawn away to the odd boxes-on-legs that were pinball machines. I could never articulate what it was that made me so distracted by these machines; I certainly didn’t like playing them. It wasn’t until later on in life that I really understood how they were drawing me in. To explain it, however, may require some digression. Stick with me though; we’ll get there eventually.

I respond to imagination the way many respond to intellect or emotion and I absolutely adore concept design. Design is making it possible to turn limitless imagination into tangible product. It is the very essence of creation. The problem is that when you have to tie design into a logical narrative everything has to make sense and since imagination is essentially thought un-teathered by reality compromises have to be made. This is unavoidable, as taking something abstract and making it ‘real’ will invariably require removing the very elements that made it abstract in the first place. But this process can sometimes go as far as to remove everything that made it such an imaginative and interesting concept in the first place.

When a film is criticised for being nothing more than a glorified toy advert I tend to get quite excited. When toys are designed a key goal is to take a single form and make multiple versions, each version as different from the next as possible while still conforming to that original form.  This creates playthings both unlike one another and yet very much uniform, thereby making them collectable. Engineering ways to prise money from children’s hands is somewhat cynical, granted, yet this allows the designer to go wild, to make each little figure as unique and exciting as possible.

He-Man and the Masters of the Universe is a good example. The toy line needed to piggy back the (then) current fascination with fantasy fiction and bodybuilding. Yet Mattel wouldn’t have wanted to risk excluding anyone still hot for Star Wars. So, as long as the basic figure remained vaguely barbarian shaped, the design people could go crazy. So with nothing but the base figure and some thin concept to work with the designers had free reign to draw from fantasy, science fiction, horror… pretty much whatever they wanted. And look at what they came up with: 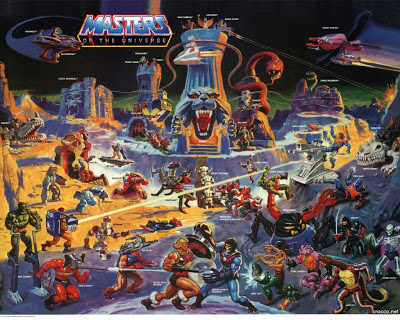 Some brilliantly imaginative stuff going on, but none of those figures belong in the same story, logically speaking. Yet some poor sod(s) had to think up a story that logically fit these crazily contrasting aesthetics together. In doing so they were faced with questions such as:

-Why is this world filled not with races of similar beings, but entirely uniquely designed individuals?
-Why does a society that is built on amazing technologies also seem to be set in an almost pre-historic world?
-Why does the protagonist have the worst superhero disguise in superhero history (in that his face and hair remain the same, and exposed, in both of his identities)?
-Why is there even a superhero element in a science fiction barbarian story anyway?
-Why is there a guy with an elephant’s head?
-Just… why?

Had these questions been posed prior to design then you’d get a sensible story and a lot of figures all looking sensible, logical and utterly boring.

It’s why I love Pirates of the Caribbean: Dead Man’s Chest (Gore Verbinski, 2006) despite it being a bloated narrative mess. I love Judge Dredd (Danny Cannon, 1995) because the look of the film far outweighs the liberties taken with the property. Masters of the Universe (Gary Goddard, 1987) is by all rights an embarrassment, but the production design is astonishing. These films may not satisfy me dramatically, but my imagination is stuffed to the gills. Like McCoy and Spock, we may want them to get along but narrative and design are not always best friends. 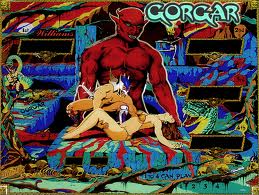 Let’s go back to the arcades for a bit. Arcade games have an inherent, albeit simplistic, narrative. With only a basic narrative thrust the potential for design is limited only by the technological capacity to realise the concept (which at the time was little). Pinball games have neither that technological concern nor any narrative whatsoever. The imagery that appears all over them requires very little compromise.

That is why I was attracted to Pinball machines (told you we’d get there).

With pinball there is no character to inhabit, no goal to reach. All we need to do is smash a ball into targets and accumulate points. We don’t even have to know why we are earning those points. The job of the designer, therefore, is only to suggest a world yet not provide a narrative to guide us through it. Context without text, design for designs sake. Pure unrestricted imagination that defies narrative logic.

And for the most part I am happy for those images to remain that way, tributes to the joy of raw imagination. Yet in amongst this gallery of plastics and phosphors a few images have invaded my imagination, challenging me to come up with a narrative that would turn these worlds into stories.

So I thought I’d have a go. 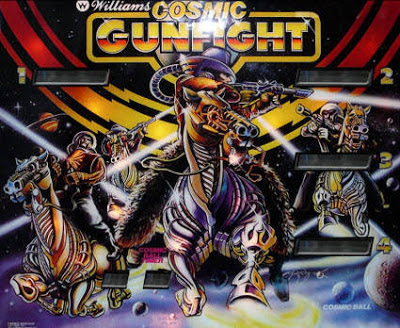 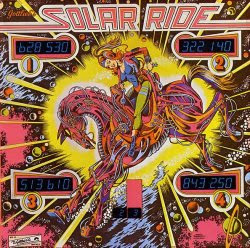 The space rodeo is the most dangerous sport there is. Straddling a robo-horse these mech-estrians are flung about in the depths of space. To come away from ones horse would mean flying into black hole or an exploding star. But like all major sports corruption runs deep.
Seduced by money, one time champion Buck Startoss left behind the games and his bride-to-be to work as a mob enforcer, scouring the galaxy for ways to extort money. Charged by the bosses with rigging the rodeo, Startoss returns to the games to find his bride has now taken his place and is the competitor rigged to take the fall.
Motivated by a rekindled love, Startoss must defy the crime lords, save his girl and compete one more time in the most dangerous game in the universe if he is ride off into the sun with the woman he loves. 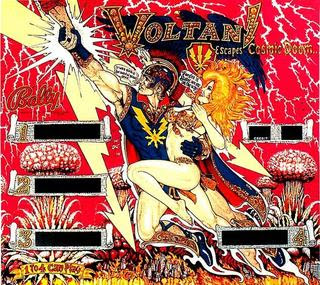 On a distant planet the city of New Rome is at war with the Moon of Sparta X. Yet for the first time in a millennia, peace is a possibility. The Princess of Sparta X visits New Rome to negotiate said peace. Yet sinister war profiteer Lord Zong plots to end the peace process before it starts. Unleashing his new weapon Zong instigates a catastrophic disaster that would see the end of New Rome. Voltan, the cities mightiest warrior, must battle lava, earthquakes and cosmic phenomena to rescue the Princess and avert a galactic war. 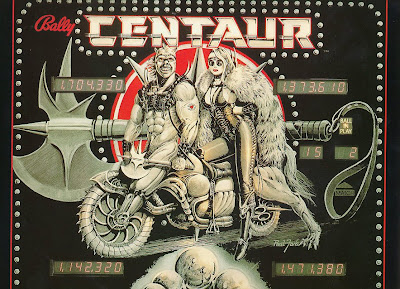 In a post-apocalyptic city overrun by street gangs, Illegal street-racer and part time sexy bio-organics expert Gloria Thrust runs a motorcycle repair shop. When rival street-racers destroy her shop her boyfriend, Zedex Spectrum, seeks revenge on the tracks. But he is horribly mangled when his bike is sabotaged. Seeking revenge of her own, Thrust rebuilds her dead boyfriend making him a cyber-centaur and together they plot to take down the evil street gang that wronged them. Featuring cinemas only 160mph sex scene. 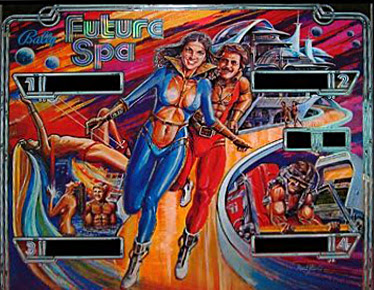 Jack and Judy Holiday take a weekend break from being laser executives at the world’s only ‘Future Spa’. While there they are treated to all forms of relaxation and exercise. But beneath the culture of self-improvement lies a sub-culture of sin. Hallucinogenic drugs, wife swapping and other temptations threaten to corrupt their very souls. Investigating further, the Holidays find that the future Spa is a living computer, intent on stealing the souls of its guests so that it might have one of its own. The Future Spa; it will test your body, enlighten your mind and destroy your soul! 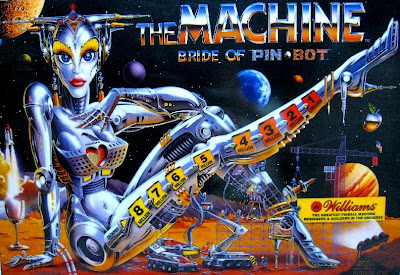 In order to protect itself from a giant space lizard, Earth’s President orders the construction of a giant robot prostitute to seduce the creature. On the moon.