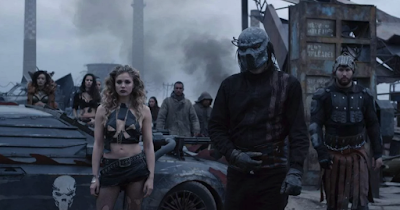 Those that have stuck with us (I imagine that any long-standing readers we have left might look like Grima Wormtongue by now) will know that I, Doctor Gogol, love the Death Race series. Not just the original, with its absurdly fun and surprisingly well-judged sequel, but the Paul W.S. Anderson produced series. Particularly the Paul W.S. Anderson ones. I don't expect you to like them, but then I find myself frequently disappointed in humanity.

I won't revisit my thoughts on those movies (if interested, click here) other than to say that 2 is still horseshit while the third, Inferno, is a joyous slice of fender-grinding carsploitation. It was, I thought, a great way to send off the series. I waved goodbye to it's burning chassis as I drove into a rusted sunset. So colour me pleasantly surprised when a fourth Death Race movie power-slid into my rear-view mirror with the intent of running me into a ditch. Death Race: Beyond Anarchy wipes the slate clean with a new principle cast and mostly new creative team and is a different beast yet one that I found equally enjoyable.

Rather than privatised prisons running televised death races for profit, now entire cities have been made prisons (Escape from New York style) and the inhabitants are streaming illegal death races on the dark web. Yes, the dark web. This film was apparently researched by a parent who'd just attended an internet safety talk at their kid's primary school.

This mega prison, or Sprawl (that's as Cyberpunk as it gets), is run by reoccurring character Frankenstein. Unlike previous versions of the movie, where our anti-hero leads are forced to take on the mantle, this Frankenstein is a full on villain. We meet him intercepting an incursion from a military team trying to end the death race and watch as he broadcasts them being chainsawed up. He even picks up one poor guy's severed head and waggles it at the camera. He's a full-on Hostel style motherfucker in this movie. Of course the important thing to note here is that the film begins with a car chase and a chainsaw massacre. Points all round. 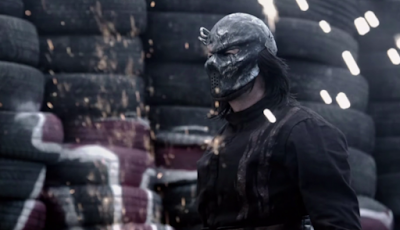 Not long after this a mysterious stranger, played stoically by sharp-faced Zach McGowan (of Black Sails fame) who immediately pisses off Frankenstein and his henchmen before taking part in the death race.

Rather than play out over a series of stages this features a couple of qualifying rounds (a motorcross style exercise and a fight to the death) saving one big ol' car chase for the end. Some purists might not like this idea but for me it freshens up the movie and ensures that the finale is a fully satisfying hunk of vehicular carnage. So those purists are wrong.

Even better news is that, like the previous entries, this puts practical effects and stunts front and centre. Yes, there are a few digital blood splatters in amongst the real flow of red but for the most part the cars really flip. The stunts are good, as are the fights, and are all shot with a clarity and an eye for geography that, thankfully, have been creeping back into action cinema over the last few years. 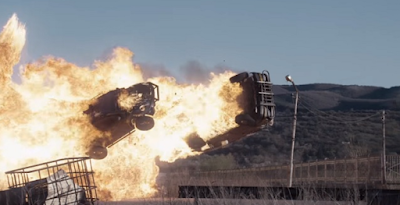 They've also leaned into the exploitation roots of the series by upping the nudity. The film is desperate to make the Sprawl seem edgy and so every gathering of people normally involves a fire eater, a thrash metal band and some topless pole dancers. I wouldn't have been surprised if one of those pricks on poweriser stilts came into frame and did a shit jump.

Sorry where was I? Oh yes, there are boobs at the edge of frame in a lot of crowd shots. More so, actress Lucy Aarden throws herself into some pretty graphic full frontal while those hoping to see some dong being hung will be sorely disappointed - only arse for you. Yes, like all "good" exploitation, the scales of nakedness are tipped firmly towards the ladies. 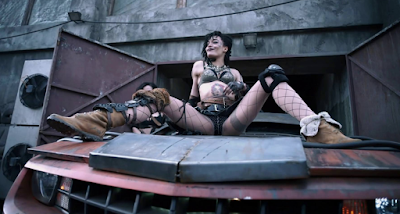 You'll be shocked to hear that the fourth entry in a series of direct to DVD, Paul Anderson produced remakes of a Roger Corman movie isn't perfect. As mentioned before it is trying to a little too hard to be edgy and sleazy at times and is in desperate need of a sense of humour. McGowan is fine, but only really gets to sneer and stare as his character, who isn't introduced for a good fifteen minutes (a deliberate choice by the Director that kinda works, kinda doesn't) and so doesn't actually have much of a story going on.

Despite these minor quibbles it is full of exactly the kind of shit you want from a movie called Death Race: Beyond Anarchy. I'd check it out if I were you. But I'm not.