In Defence of Death Race 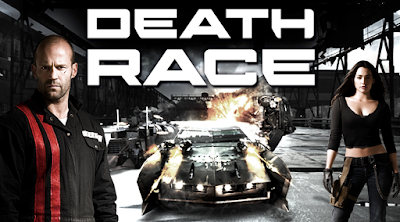 Death Race 2000 feels like the ultimate cult movie, mixing outlandish ideas, bold choices and exploitation without letting its modest budget hold it back. With a belated sequel out in the U.S. and not far off a UK release I thought it timely to launch one of my ill-advised defences. On trial this time round is the much maligned Death Race remake and its little-seen sequels.

Death Race has more money to spend then the story it is retelling had yet what is gained in production value is lost in smarts and balls. Gone is the satire and the black humour. This movie is straight, uncomplicated action movie making with a grimacing Jason Statham, fight scenes, girls in hot pants and tank-tops and a rock soundtrack. It pisses away its inheritance spectacularly. Just for one moment, though, imagine Death Race 2000 never existed and let me pitch you Paul W.S. Anderson's version.

Fired from his low-pay manual labour job and framed for the murder of his wife an ex-race driver is sentenced to a privately owned prison facility that forces its inmates to compete in televised gladiatorial battles. Rather than fighting these battles with fists or melee weapons these warriors must race each other down in heavily armoured battle cars. Starring Jason Statham, sweary Joan Allen and Ian fucking McShane. 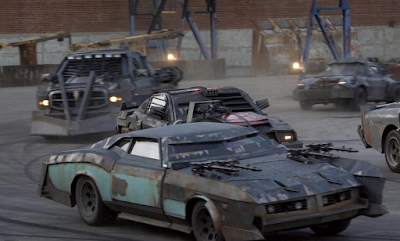 That is an awesome sounding movie right? And you know what? It pretty much delivers. Judged on its own terms this is a rollicking action spectacle that realises its premise totally. The "sport" itself makes sense and the need for Joan Allen's sadistic warden to get higher ratings gives justification to raise the stakes of each race making the escalation of action satisfying and logical. It wears its influences on its sleeve: the finale features a giant battle truck that seems to have driven straight out of The Road Warrior and onto the set. The cars look great, the drivers distinct enough to be interesting and there is enough going on between races to keep you engaged.

The film does suffer from the dreaded close-up shakey cam which, at times, muddles the action a little. Although the cars look great the colours are muted so that when the visuals get intense you're not entirely sure what car you are looking at. There is no sex or nudity but the parade of girls in push-up bras and skimpy clothes are reduced to eye-candy rather than being given any complex roles. This movie doesn't push boundaries of representation or action film-making, yet as a fun b-movie it is everything you could possibly want.

Death Race 2 replaces Statham with Luke Goss, but seems to not replace any of the action scenes. Watching it I was sure they'd just lifted most of the shots from the first movie. The problem with that theory is that they are worse on every level. A meandering story, lack of any charisma on screen, weak car stunts and a finale that doesn't feature any car action Death Race 2 is the kind of bullshit even I am not willing to defend.

Thank Jesus then for Death Race: Inferno, a movie that not only improves on its predecessor but maybe even on the original (the Statham one I mean). This one actually features an interesting story that comes together like a Danny Ocean plan at the end and a much-needed injection of scenery chewing from always reliable Dougray Scott. The ladies in little clothing element hasn't been reduced, but instead pushed to such a ludicrous level that it feels less exploitative than the earlier movies.

Yes, there is a completely unwarranted shower scene for lead Tanit Phoneix, yes her entire arch is to go from not being in love with Luke Goss to being in love with Luke Goss and yes Danny Trejo gets off with a fan-girl a third of his age. But the all-girl cage fight (which involves fists, bladed weapons and at one point a flame-thrower) is absurdly fun and although the combatants are wearing their usual lack of clothing the televised reality show element of it all just about allows them to have their cake an eat it (just). They also introduce the first female driver which, although barely a gesture, at least shows some degree of movement in the right direction. 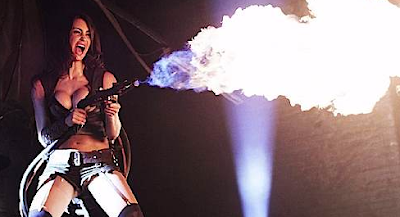 It's the action, however, that is the real draw. The races have been moved to the deserts and shanty towns of South Africa giving it much more of a post-apocalyptic aesthetic. The vehicles have more distinctive designs while the action, and blood, are almost entirely practical. It is wonderfully gory (an entire person explodes at one point), exciting and all shot with clarity. Its low budget is evident but in the world of straight to DVD action it looks positively opulent.

Death Race and Death Race: Inferno lack any of the bite and humour of Corman's original classic but judged on their own merits they are two thrilling b-movies that are well worth you attention.