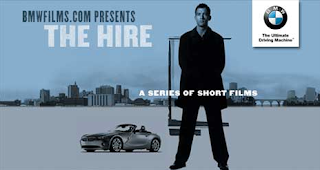 In 2001 and 2002 BMW released a series of short films featuring their cars. Rather than a series of extended adverts these were action shorts made by high-profile directors and writers, seemingly given free reign to work with whatever styles and conventions they wanted. So whereas it would be easy to write these off as simple commercial fluff the eight short films actually provide an array of interesting and evocative approaches to action. It's almost as if the intrusive product placement has been turned on its head with art now being the element that forces its way into commercialism.

Fancy seeing a new John Frankenheimer car chase? Well then check out Ambush. How about a balletic and charming vehicular pursuit? Go for Ang Lee's Chosen. There is a self-depreciating turn from Madonna as a petulant diva in Guy Ritchie's Star and raw, cinema verite political thrills in Alejandro G. Inarritu's Powederkeg.

These 10-minute blasts all feature Clive Owen as professional driver who finds himself on a series of intense jobs carrying people and products from place to place while always getting caught up in unexpected situations. The four shorts mentioned above are all solid and cinematic films that will happily sate any four-wheeled combat you might in be in the mood for. However it is the following four that really stood out for me.

As a bonafide John Woo nut the early noughties were not a good time. Gone were the Hong Kong days of The Killer and Hard Boiled and the Hollywood days of Hard Target and Face Off. No, John Woo fans were fully in a world of Paycheck, MI:2 and Windtalkers. So the notion that Woo was getting to make an action short featuring car chases was an exciting prospect. To be honest Hostage, a story about Owen's Driver racing against the clock to track a kidnap victim, isn't as exciting as his shoot-em ups. It's a neat little story and the action is fine but Woo's handling of motion doesn't quite thrill with cars in the same way it does with humans. Perhaps because humans are essentially awkward and chaotic creatures that seeing them, and the destruction they cause, gliding harmoniously is where the pleasure comes from. The thrill of cars in movies is seeing smooth running, finely tuned machines smash, crash and tumble their way through all sorts of obstacles, the reflective and sculpted bodywork mangled and twisted beyond recognition. So when Woo has these sleek machines gliding and spinning beautifully well... it doesn't quite excite in the way we'd want. Still, it's a cut above the other four from a stylistic point of view alone and a must for any Woo completists.

Wong Kar-Wai's The Follow is interesting primarily because it eschews action instead focussing on procedure and morality. Co-starring Forrest Whittaker and Mickey Rourke this short sees Owen hired to follow someone's wife only to uncover something that makes him question what he does and who he does it for. It's simple and effective and looks gorgeous.

Tony Scott, on the other hand, leaves the biggest imprint with his bonkers Beat the Devil. In this one Owen has a street race with the Devil (a lipstick and lycra wearing Gary Oldman) in order to return James Brown's youth. Seriously. Imagine telling Dracula/Leon/Fifth Element era Oldman to "go for it", then imagine Tony Scott trying to top that level of crazy with camera and editing. It is, to say the least, less conventional than the others but one you won't forget in a hurry.

Probably my favourite, however, is Joe Carnahan's Ticker. It's a stylish but exciting race against the clock as the Driver is hired to transport a mysterious package that looks like it could explode any moment. The action is brilliantly handled and a nice little twist in the tale makes for a narratively satisfying little parcel. Personally, I think it's the best thing Carnahan has done.

A new film has just been produced celebrating the project's 15th anniversary, this time directed by Keill Blomkamp. Owen goes up against Jon Bernthal as he transports Dakota Fanning from a secret facility. It's really just an excuse for a chase but when your centre-piece is a tug of war between a car and a helicopter it's difficult to feel short-changed. 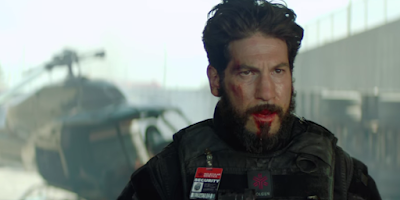 As a collection these nine shorts give some great Directors the chance to flex their action muscles and the results are all fulfilling. They were also a little ahead of their time. As the website proudly boasts these films were released online before YouTube was a thing yet the template of giving top filmmakers free reign to play online is one few have followed. You can see the initial 8 shorts by following the links peppered throughout or head over to BMWfilms.com to watch The Escape. They are all well worth your time.