Man, that image above. Leapt from the shelves of Starburst video every time I went in. Branded my imagination - hot metal on soft brain - to the extent that all this time it has felt personal to me, even without seeing it. And when I did see it, it felt familiar, like it came from me. Like I knew and loved this movie before I'd even laid eyes on it. Like we were always part of the same whole.

That's an awfully poetic way to talk about a movie featuring a goth monster with a massive rubber face. But what a rubber face. 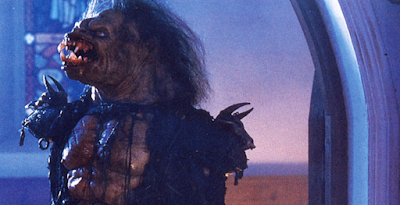 Look, this film is goofy as all fuck. Big stone falls over, giant leather-wearing Celtic demon pops out and mashes up the locals for shits and giggles. But the location is great, subverting rolling green hills so that they appear hostile much the same as the Hammer films did. It has a bold orchestral score that gives the movie some scale. Some of the horror moments work really well and though the smoky-
light optical effects are a little ropey at times they add a visual quality that I have always associated more with the supernatural than any modern digital ectoplasmic mists. 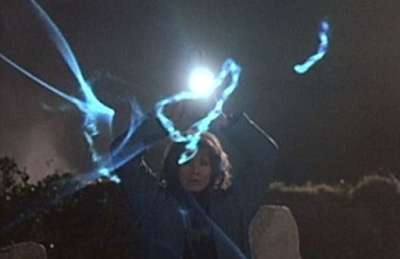 There is also a really great firebombing scene in which a zealot blows himself up where the depiction of someone being so under the influence of another genuinely got under my skin. And, of course, there is a moment were Rex takes a lovely big piss over a grateful vicar. It's got everything.

Okay, yes... we need to talk about the monster. I mean it's not that bad, right? A lot of work has gone into that. And at least they've tried something a bit more ambitious than a face appliance and some horns. They could have gone further, of course. Clive Barker originally envisioned a big penis creature, while the Producers went instead with what looks like a prop from a heavy metal concert. But what we lost in dick monsters we gained in leather-clad bad boys. Like Joey Boswell from Bread warp-spasmed. And, in a weird way, he's kind of adorable. When he's not whizzing on a minister or killing children that is. 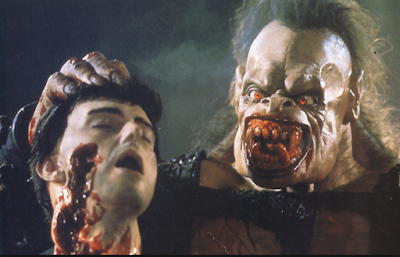 Also, how many movies with great visuals on their VHS sleeve actually have that image in the movie? Well this one does. Maybe if Rex had remained caked in mud and in profile he wouldn't be as looked down upon as he is. Poor, poor Rawhead Rex.

I think Rawhead Rex is a fun creature feature that requires little effort on your part save looking past a googly-eyed and wobbly head. I bloody love it.