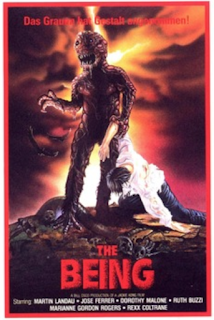 Of all the things that inexplicably hook me about cult movies being truly baffled by one is a favourite.  Its easy to enjoy a wonky rubber outfit but when a movie has you confused, well, you've really got to work for your entertainment. 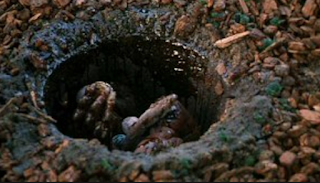 On paper The Being is a simple tale about polluted waters causing a slimy creature to attack a local small American town. The creature, a kind of Xenomorph/Thing hybrid, is actually fairly effective. I found one shot of it coiled in a small hole in the ground particularly creepy. Wisely, they keep it's KY covered fleshy visage in the dark for most of the film and, save for one unfortunate moment where they throw a fairly shit version of it from off screen to simulate it "leaping", it holds up pretty well throughout the movie. The gory moments are also pretty good, especially a hand though the chest heart removal and some severed limbs. 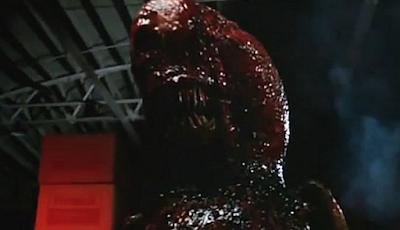 There are some clunky moments, and the utterly charisma-free lead is a real problem, but none of these are alien to this level of filmmaking. No, it's the way all of this has been executed that had my brain doing acrobatics. To be clear, this is not some Lynchian puzzle designed to disorientate but a series of odd creative, directorial and tonal choices.

Let's take the opening. There is a slow zoom into an anti-porn protest as a radio DJ informs us that there has been a brief lull in an ongoing storm that meteorologists are warning is only temporary while a low electronic growl builds beneath the shot. Actually, this is very Lynchian. It's all foreboding mood and the juxtaposition of small-town moral pretence with a sense of dread. It's pretty effective.

Unfortunately we then have a series of shots of, admittedly impressive, storm clouds as a rich-voiced announcer gives us a clunky voice-over. Apparently there have been a spate of missing persons cases, in particular a small boy has gone missing. We are also informed that something is about to happen to this town that will change it forever. This is not the voice of a TV announcer or political speaker but a direct address to the audience. Which is fine, but why have such a jarringly unnatural expository device right after a natural one. Why not fold the missing person case info into the radio broadcast? In fact, why is the hot news that there is bad weather on the way when they is a child missing? Especially since the oncoming storm plays NO PART IN THE MOVIE what-so-ever. It's almost as if the director couldn't decide which way to start the movie, so did both. This is kind of choice characterises the film's specific flavour of weirdness: not face-palm inciting bizzaro, just distractingly odd.

The subplots are equally strange. We are told that radioactive waste is being dumped into the town's water supply. This introduces us to Martin Landau's energy specialist character who is constantly re-assuring the public that this is all totally fine and no harm can come from this. It is clear we should not trust him. We then have the Mayor's wife's anti-smut campaign, aimed at a soon to be built massage parlour. Landau's dodgy science expert appears at one of these protests, seemingly trying to distract attention from the radiation to what he refers as the "real contamination". The mayor, who is frequently seen buddying up to Landau, wants to cover up any and all potential trouble because, like the Mayor in Jaws, he has some plans he doesn't want scuppered. Unlike the Mayor in Jaws he's worried solely about potato sales. Yes, potatoes. In short, these three set up an unholy trinity, working together and representing cynical capitalism, moral hypocrisy and corruption. And none of these plots go anywhere. 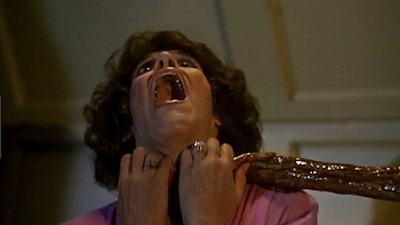 Most perplexing of all is that the key radiation subplot is never actually resolved. Landau appears at regular points claiming the water is safe, even going as far as to camp out by the water and drink the water on live TV. And y'know what? He's never challenged. At no point do we get any confirmation that the water is contaminated and that it is the cause for the beast. So, basically, Landau's scientist is 100% right. And then, despite being set up as the antagonist, just starts helping out the good guys about 30 minutes before the end. 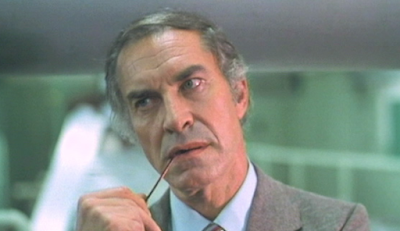 There are little moments too. There is a traditional cat-scare false alarm while our hero cop and Landau's scientist are searching for the creature. And Landau's character finds it hilarious. Oh, does he laugh. He howls with laughter, like the Joker, out of nowhere. It's like being scared by a cat is the funniest thing that has ever happened to him.

Oh, and what about the prolonged dream scene? The one where our hero cop imagines he is flying a light aircraft with Landau's character who, we assume at this point, is the villain of the piece. Landau's character falls out of the cockpit and onto the wing while the slime beast grabs at his legs. Our cop can't save him and Landau falls to his death. Then the mayor's wife flies by on a broom stick, crying blood and telling him its "all in his mind". This movie is so weird. So weird.

Then there is the deputy's running beef with a guy he refers to as a "taco salesman". It is never clear whether this is some kind of racial slur (the poor guy's ethnicity is never established) or whether it is his actual occupation (we never see him sell Tacos. All we see him do is fish).

Even the final freeze-frame of the hand of a second creature rising from the dirt goes on for way, way too long.

It wasn't until about an hour in that I began to suspect that maybe this film thinks it's a comedy. Like, perhaps the potato thing, or the weird dream, are meant to be ridiculous. Thing is, even after properly mulling over the film I'm still not entirely sure. So few of these moments actually work as jokes and are scattered so haphazardly that it is impossible to get a sense of what tone they were aiming for.

Each moment of strangeness is pretty minor on its own but the accumulative effect of all this means the film repeatedly surprised me with its strangeness.

Had The Being recast is lead and decided on a consistent tone this would be a pretty good monster movie. To be fair, even without that it still kind of works. But some of these ever-so-slightly bizarre choices made the experience of watching this more than just a fun distraction - The Being is not so much a film to be entertained by but a curiosity to study. 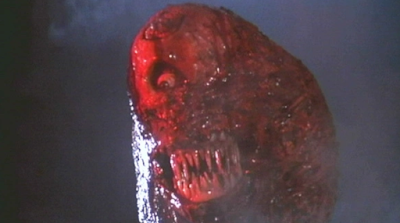