They say it takes your tastebuds seven times to adjust to a flavour. I'm not sure if that applies to taste in other things but I'm on my fifth Robert Ginty movie and he's just started to grow on me.

My first exposure to this actor was in revenge thriller The Exterminator. This flick had one of those VHS covers that buried itself in my brain when I was a kid. You know the one: ripped sleeveless dude in a cool motorcycle helmet armed with a flamethrower. Covers don't come more badass than that. 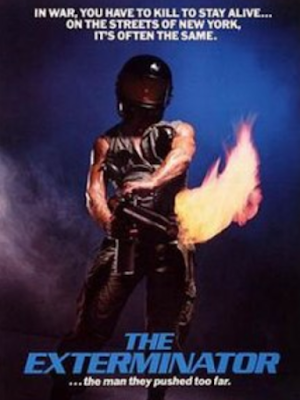 Many, MANY years later I tracked the film down (on a double-disc set with Maniac Cop if you insist on barging you way into my whole life). Five minutes in and I was very excited. The opening scene is a Vietnam flashback. It's night. Giant fireballs balloon into the sky. Choppers swoop across dark fields. Signal flares cast the jungle in deep red making for a particularly apocalyptic landscape. Three American soldiers are captured; one you never get a good look at, one younger slightly wormier guy and Steve James. The first guy gets beheaded in a pretty spectacular practical effect. The other two escape in a hail of slow motion gunfire and satisfying squibs. The opening had everything: atmosphere, action, gore and an acceptable level exploitation grime. If I'm in for 90 minutes of motorcycle dude doing this, I thought, this could be an all timer for me.

In modern day New York wormy guy and Steve James work in a meat packing plant. James gets paralysed in a gang attack so wormy guy decides to apply his Vietnam skills to get revenge. Wormy guy is The Exterminator. Badass cover biker dude does not appear in this film. 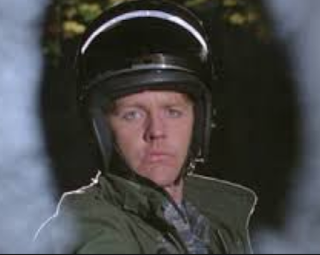 And so begins my introduction to Robert Ginty AKA wormy Exterminator. Promised a muscular badass I was given a guy who looks like he should play Jimmy Olsen. Poodle-haired and confused looking, Ginty never convinces as either a badass or a troubled psycho.

The movie is essentially a Death Wish knock-off, only instead of getting Charles Bronson you get a supply teacher. Although there are some creative kills (sausage grinder springs to mind) none are built into action scenes. A cool car sequence aside it is all just so inert. It also tips its scales way too much into sleaze at times, especially when a sex-offender brands a prostitute. More than that I found the casting of Ginty confusing and disappointing.

My next experience of him was in White Fire, a movie with a great poster and an awesome chainsaw fight and literally nothing else going for it. The only other moment of note is that Ginty, poodle hair now like a mushroom cloud, plays the hero and there is an extended scene where he tries to fuck his sister. Not winning me over here Ginty. 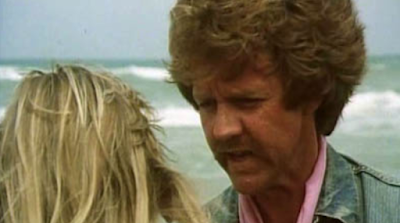 I bought Codename Vengeance for 50p completely unaware Ginty was in it. It is a serviceable man on a mission movie. The kind shot in the Philippines that features either men in army fatigues spraying a field with M-16 fire resulting in stuntmen stage falling to the ground or suited men in wooden offices being all CIA and monologuing about omelettes and eggs. At times the action is pretty good. Ginty is fairly lifeless in it but he has filled out a little bit and kind of rocks a Russell Crowe look. Its the first time I'd seen him in an action movie and understood why he'd been cast. 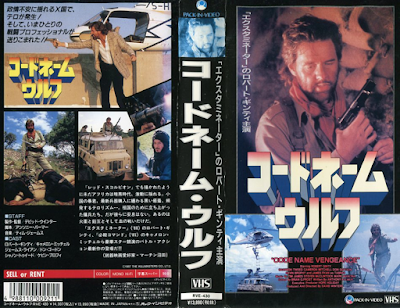 Next up was Warrior of the Lost World, a post-apocalyptic action movie that I'd long looked for but again had no idea Ginty was the lead in. It adds a little Star Wars into the Mad Max mix with an opening crawl and evil empire. Ginty plays the titular warrior who has a super bike with an annoying as fuck computer voice that outstays its welcome two minutes into the bloody film. Ginty's warrior meets up with a resistance group and is told he has been chosen to destroy the evil empire and free the world from its tyranny. 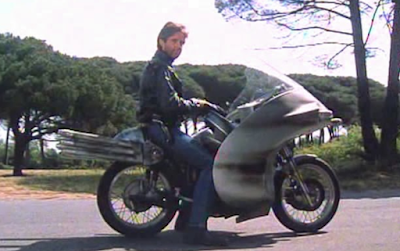 This surprised me a little as Ginty's Warrior is fucking useless. The opening 10 minutes is a series of set pieces where Ginty escapes one ambush only to drive right into another. In the first he is shot in the shoulder. In the second he is shot in the leg by a fucking teenager. The third he gets shot in the head, only surviving because of his helmet. He then gets back onto his bike and drives it straight into a wall exploding in a ball of fire. If it weren't for the fact the wall was some secret magical illusion (or some shit) designed to hide the resistance this ridiculous prick would have been dead 10 minutes in. What a knob.

That being said the movie is kind of fun. There are nice propulsive action moments and you even get Donald Pleasence and Fred Williamson. And Ginty is fine. At the end of this movie I was by no means a convert, maybe I'd just been worn down, but finding Ginty in the lead no longer felt like I was being short-changed.

And with this I chose to watch Exterminator 2. Actually sought it out and decided of my own free will to watch it. And you know what? It kind of rocks.

This time Ginty is dressed in a welding helmet and has a ruddy massive flamethrower for a lot of the movie. He is depicted not unlike a slasher killer, showing up after a prolonged scene of violence by young gangs just to incinerate them. He looks badass. He's also up against a street gang lead by a young Mario Van Peebles dressed like a wasteland Grace Jones.

Like the Death Wish sequels Ginty's vigilante tries to settle down. He gets himself a dancer girlfriend and a part time job with an old friend driving a garbage truck. Of course his girlfriend is paralysed in a gang beating and his friend shot to death. Exterminator gotta exterminate, right?

The nasty streak is still there (there is a lot of watching corpses burn) but generally it plays on action more than seedy thrills. The worst part is Ginty finds his girlfriend lying face down on a bed naked with the gangs tag spray-painted on her back. You never find out if she's actually dead (it is assumed) and although the nudity implies sexual assault it is never witnessed nor confirmed.

And unlike the first film which super under-delivers on its cover this movie gives you more! Not only does Ginty wear his outfit a lot in this movie he even armour plates the garbage truck! It's got machine guns and everything! The action is pretty good at times and even though the finale is bogged down by some unnecessary running about this movie is exactly the brutal genre movie I'd hoped the first would be.

And you know what? Ginty is actually pretty good in this. He not only sells the badassery but he actually gets to act. He convinces as someone with a troubled past, sells the romance without it being two corny and genuinely convinces in his rage. Those dark, upturned eyeholes can be a deep well of misery it appears.

And so film five leaves me not only liking Robert Ginty, but curious to see if Exterminator 2 is an anomaly. And it seems there a plenty left to choose from! Cop Target, Maniac Killer, Three Kinds of Heat, Programmed to Kill and Gold Raiders all sound right up my street.

Maybe by film seven I will have proved what they say about tastebuds applies to movies too. 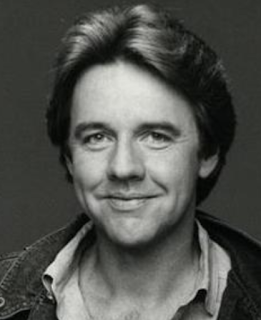