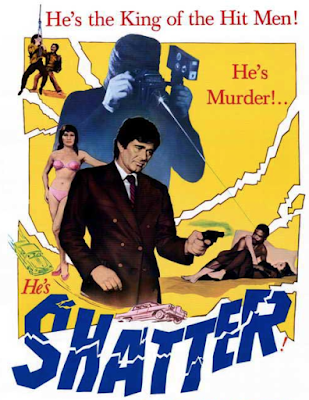 Riding the waves caused by Enter the Dragon, Hammer and Shaw Brothers produced two movies only a year after Bruce Lee's hit was unleashed on the world. The first, The Legend of the Seven Golden Vampires, is the kind of thing you'd expect from Hammer (it is also awesome). The second, Shatter, is not only un unexpected type of movie for the studio but an unexpected movie for the genre.

This spy movie opens with an African dictator getting frisky with a woman in a hotel room. While he pours champagne over her and nuzzles away, a figure in a strange mask appears from a doorway behind him. He raises a camera but it is not blackmail on his mind. Hidden within the camera is a gun. The masked killer fires two shots, one into the dictator's back and one into his forehead. The damage is graphic, bloody. Another shot goes into a bodyguard's forehead spilling bright red gore down his pain-contorted face. The woman screams and the credits start.

This sequence works really well. It is violent, not just in action but depiction. It feels unpleasant, dirty, messy. Even though the victim is a dictator you kind of feel bad for him. This is a great way to set up a villain.

Only the masked killer isn't the villain; he's Shatter - our protagonist. And he has a Shaft-esque theme tune to tell us that.

I must admit I was a little confused at this point. I was expecting a Bond clone. A tough secret agent getting involved in kung-foolery not some sadistic masked assassin that shoots men in the back when they are on the job. I really thought they'd bungled the opening. But Shatter is not a Bond clone by design. It is meant to be unpleasant, dirty, messy.

Shatter is a freelance assassin, his targets communicated to him through a secret procedure that ensures anonymity. However someone has intercepted this process and hired him to kill the dictator. Not only does Shatter not know who hired him, and so can't get paid, but soon discovers that everyone (the Dictator's Brother, British intelligence, a crime syndicate) want Shatter dead for the assassination. Shatter is blacklisted, alone and desperate. 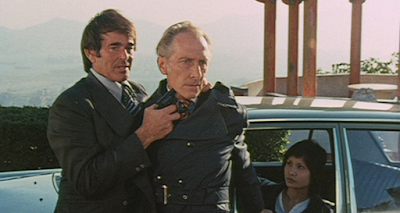 He's also a pretty sad character. He drinks a lot, and not in a romantic "shaken not stirred way". He visits massage parlours and dive bars. He has flashbacks to that overly violent assassination. He is beaten in alleyways, threatened and bullied. His actions aren't always skilled or calculated. He's blunt. He's what Bond might really be like. 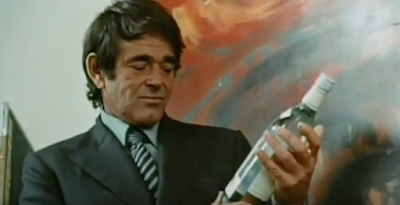 His only friend is a masseuse Called Mai-Mee and the owner of the club she works in, Tai-Pah (played by Shaw Bros regular and A Better Tomorrow 1 and 2 star Ti Lung). Tai-Pah also happens to be a kung-fu master who protects Shatter as he tries to track down those who set him up. 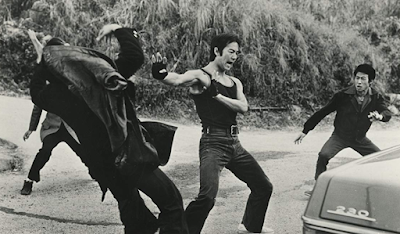 So what I thought was a misjudged opening was actually purposeful and it is only the sexy theme tune that is a little out of place.

That's not to say the film is a home run. It's middle is immensely slow, for instance. Only a martial arts demo with Tai-Pah pitting Kung-Fu against Thai boxing and Karate and a roadside scrap keeping things moving. Peter Cushing shows up for a couple of scenes, which help, but the ferocity of the opening sequence is lost. It also doesn't help that Shatter comes across as kind of unlikeable.

Things pick up towards the end. A fist-fight/shoot-out on the docks is fun and adds some gore back into the proceedings. Not only do the bullets make nice wet impacts but Tai-Pah throws some poor guy onto a meat hook.

And then there is the finale: In the top-floor offices of a skyscraper Shatter finally finds out who has been screwing him over and the two individuals are about to cut his vocal chords to stop him blabbing. Tai-Pah comes to the rescue and we have the most satisfying fight of the movie. It doesn't compare to anything Bruce Lee did but it is the best fight in the movie. We also get a two-for-one on villain kills. Shatter shoots both bad guys out of the window and we are treated to the wonderful sight of a double-dummy drop. Both dummies are equally awful yet they are so synchronised their fall is somewhat beautiful; like watching olympic diving for divers with no knees or elbows.

Shatter clears his name but even his reward is shit. He gets £10,000 (enough to run a small bar) and he can't leave China if he wants to live. He doesn't complain, everyone just silently agress he's lucky to even have that. It's a pretty perfect ending frankly.

Shatter surprised me. It has more in common with Poliziotteschi movies than camp spy thrillers and martial arts romps. It isn't great, but it's misery is well-measured and the film features some occasional sparks of brutality and ingenuity that could have made for something special if only they had been more consistent.

That theme tune is pretty sexy though.