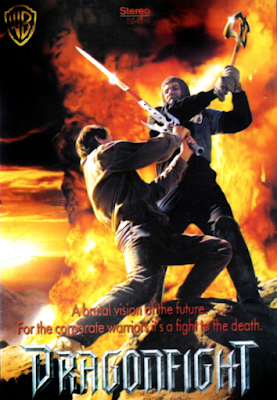 Here is a recipe for you:

1. Take a handful of wildly different genres
2. Take a complete lack of understanding of the most basic storytelling methods
3. Mash with fist until you have an uneven, unpalatable, beige paste.

This is how I imagine Dragonfight was conceived.

Here is the plot: Corporations start betting money and stock on modern-day gladiatorial fights. But when Falchion, a champion combatant, decides he can no longer compete he throws his adversary, the monstrous Lochaber, into a rage. Lochaber hunts Falchion across a desert, killing innocent people in the hope to drive Falchion to change his mind and face him in the ultimate showdown.

Pretty straight forward right? And sound pretty cool sounding too. Yet the complete lack of any kind of storytelling skill mangles what should be an efficient action movie. Actually, I'm not even going to say it is the storytelling that is the prime concern but the inability to relay even the most basic information. It took me nearly 25 mins before I had a handle on what kind of movie this was.

Let's start from the beginning. We see a montage, driven by upbeat synth, of two warriors fighting with weapons as the sun sets over a desolate wasteland. A gruff voice over talks about countries living together peacefully but the corporations ruining it all for humanity. A pretty standard opening for a post-apocalyptic movie.

Then we cut to a very contemporary (and non-apocalyptic) corporate office where executive Michael Pare hands CEO James Hong a file on the Dragonfight; an ancient Japanese form of settling scores. Hong seems oblivious to the notion but is intrigued in a little side-betting. Pare is dispatched to find a champion. 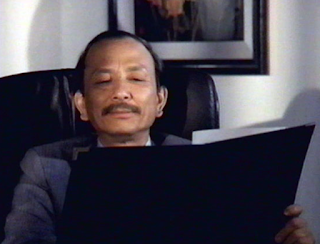 Pare goes to a (non-apocalyptic) bar and finds Falchion there drinking. He pays a woman to talk a mulleted beef-cake into starting a fight with Falchion. This spills outside into the street. This is, essentially, Falchion's audition. And you know what? Falchion doesn't really display any notable combat skill. At one point he is thrown in a dumpster. In fact he only wins because his opponent is accidentally stabbed to death. Despite this Pare feels his has what it takes to be his company's "champion".

At this point I began to realise this is not a Mad Max/Steel Dawn-esque apocalyptic movie. Maybe more of a lawless, Robocop urban nightmare. Yeah, ok.

We then cut to Lochaber (Robert Z'Dar) walking out of a club wearing a Don Johnson-style white suit and a woman on his arm. A man walks up to him and says "you don't look so tough" and so they have a fist fight. Then we realise he is being watched by a corporate type who declares this guy his champion. Please note that at this stage no mention of Lochaber being a career Dragonfighter is mentioned. It is literally as if they just picked a random dude off the street. No worries "this Hard Target vibe fits with the whole urban nightmare scenario the film seems to be building"  I thought.

The two then meet in the desert for their fight while each of the corporations monitor them from their offices. Falchion arrives first and he's dressed in leathers, kind of like Hawk the Slayer. Lochaber, on the other hand, has gone full medieval with his outfit. He has a massive axe and a chainmail hood. It might sound cool but he looks a bit of a tit to be honest. 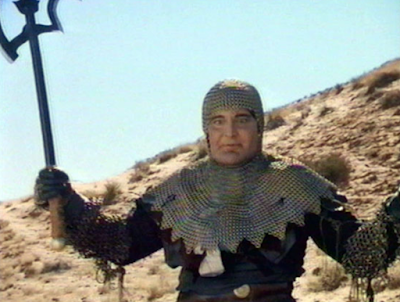 Anyway, the two have a brief chat possibly suggesting some history (which is neither clarified, expanded or even referenced again) and Falchion decides to walk off. This upsets James Hong who tries to re-assure his associates that Falchion is the best there is, displaying an uncanny knowledge for Japanese history, Falchion's career and the whole Dragonfight tradition despite not knowing a damn thing about it in the previous scene.

Despite letting him walk away Lochaber then decides he wants to fight Falchion and so runs after him. There is a lackluster scuffle interrupted by the arrival of motorcyclist. I assumed this guy was like the chasers in Hard Target, and that he had been despatched to herd Falchion back into the fight. He heads right towards the two, as he would but is killed by Lochaber. All the execs watching suddenly lose their shit and start talking about being accessories to murder. Ok, let's take a break and review my thoughts at this stage:

- So this is isn't some lawless future at all but actually modern day America where murder is really wrong.
- The execs are bankrolling an illegal fight to death with blade-wielding warriors, recruited in an orchestrated bar-fight that ended fatally but without consequence and yet it's only the death of some dude on a bike that makes them realise they might be doing something wrong?
- This guy on a bike was some random innocent guy? Just riding across the desert? I mean, he had the whole desert and he drove right into the two guys sword-fighting in medieval garb?

My head began to hurt a little. Luckily the movie didn't throw too many more curveballs at me and the whole farce settled into the premise I recounted above. Unfortunately this is where the movie just gets boring.

Falchion runs and meets a woman and her uncle. The woman becomes his love interest while the Uncle provides the voice over at the start and another three times throughout the movie, often revealing the internal decision-making process of Falchion despite not really knowing anything about him. The Uncle also dies before he can get to know Falchion. So why this old dude gets to be the one who narrates, but only very occasionally, I don't know.

Lochaber, meanwhile, adopts the role of slasher-killer, stumbling across lots of randos (this desert is busy) and offing them to try and convince Falchion to get back in the fight. With the exception of one, all of these kills happen off screen. 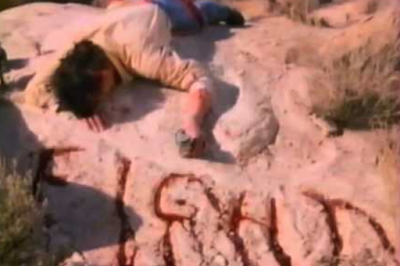 This drab cycle repeats for ages while the execs continue to watch the entire thing on camera. Please note we never see a camera-operator or helicopter even if the shot they are watching would have required a camera to have been inches in front of the fighters.

In this joyless void that is the rest of the movie there a few weird choices that at least got me engaed by virtue of confusing me. The first is that the woman from the start (the one who got the beefcake to fight Falchion in the bar) is also in the desert dressed in a cape and feathers and stabbing knives into the ground. We discover about half-way through the movie she is a sorceress that can raise the dead (she brings Lochaber back from the dead twice). So magic, actual magic, exists in this world. 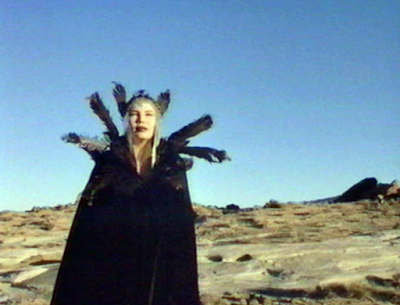 The finale also features a bizarre random occurrence: During the Falchion and Lochaber's final fist-fight a helicopter lands next to them in the desert so that Lochaber can be thrown to his death into the rotor blades. The pilot gives the camera a "whoops" look and then flies off. Who he was, why he landed in the desert and where he then went is anyones guess.

There is a thinly sketched theme about there being no heroes that is at least demonstrated a number of times. primarily through Falchion being an unlikable twat. Not only does his reluctance to face Lochaber get loads of innocent people killed he casually watches his love interest get axed in front of him before he steps in and fights Lochaber. He literally stands idle and watches her get murdered. No shit there are no heroes anymore Falchion. Plenty of douchebags though.

Does this all matter though? Surely if we are watching a modern-day gladiator movie do we really care about story, narrative logic, world-building (even if the world they are failing to build is the one we live in)? Surely if the fights are good then we can overlook all this other nonsense right? Well guess what, the fights are shit. There are very few of them and when they do occur they are weak squash.

So what is good? Um, the poster is alright. Charles Napier is in it and he's always good. Two jokes kind of/almost land. The music is alright. Oh, and there is an awesome shot flying backwards through a canyon but upside down so we see the reflection in the water and two cool shots of people in front of sunsets. Annnnd... that's it.

Look, I never take pleasure in attacking a movie. Almost every review I write is a recommendation for a film that I feel is either genuinely good, has genuinely good elements or is crazy enough to be entertaining/intersting. If I see a stinker I normally just try to forget it. But this bastard owes me. It sucked up and hour and nineteen minutes of my life and I'll be rogered if I don't at least get a post out of it.

Dragonfight is horseshit. My God is it horseshit.