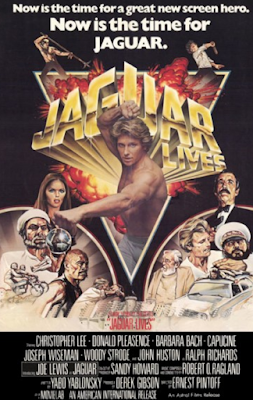 Secret agent Johnathan Cross AKA Jaguar is double-crossed on a mission and severely injured. Once recovered he is sent on a globe trotting mission to hunt down an evil kingpin. This vehicle for Joe Lewis, a martial arts champion and student of Bruce Lee, tries to emulate Bond movies while livening them up with a little martial arts action and manages to miss the mark on both counts. That is not to say it doesn't try - by god it tries.

What surprised me most on first viewing is how much money had been spent on a kung-fu flick I'd never heard of. The opening sequence features a gorgeous location, a shoot-out on a cable car/elevator and a pretty impressive explosion achieved through some unusually great miniature work. 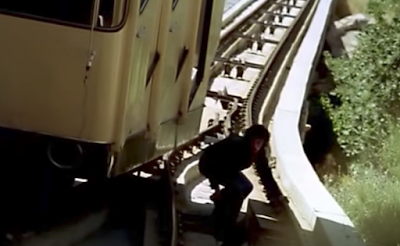 In fact the production value is consistently good. The cast is exceptional and includes Christopher Lee, Donald Pleasence, Barbara Bach, John Huston, Woody Strode to name but a few. It is no coincidence that many of the cast have been picked due to their association with Bond. The movie tries to out-do Bond at every stage featuring some nice stunt work and about a thousand different exotic locations. So how does it fail? 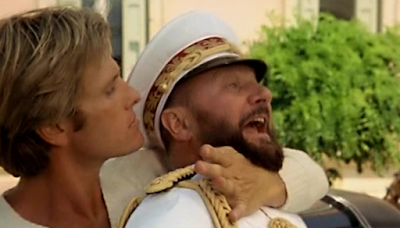 Having more locations than your average Bond movie is one thing, but cramming them into one narrative organically is pretty difficult. And so instead of a developing, escalating spy story we have a plodding travel diary as Jaguar visits a location, meets a guest star, maybe has a fight then moves to the next location. Each of the stellar cast mentioned only get a few minutes screen time before giving Jaguar the info he needs to zoom off to the next location. A pretty repetitive beat quickly forms making a fairly manageable running time seem like an eternity.

This might not be so bad if every location visited had a themed action sequence but this is a movie that commits perhaps the biggest action film sin: not enough action, and what there is doesn't really work. Joe Lewis has skills, clearly, but each fight is so short he never gets the chance to show off anything more than a few kicks. A stunt involving Jaguar hanging on to the top of a speeding car starts exciting but ends not in a spectacular crash or a fight, but simply with the driver getting away. A stand-off in a factory promises the sight of Lewis taking on an army of workers but after a few kicks he scurries over some boxes and gets away. The fights are indicative of the movie's key problem: rather than sticking with something and exploring it, it shows us a glimpses then races off to the next thing. 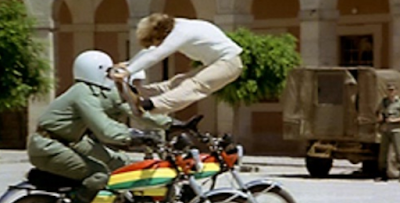 That is not to say there are no notable moments. Jaguar fighting two guys on motorbikes is inventive if not extensive, a graveyard gauntlet works if only because after each short fight is over Jaguar walks right into another one and the final fight atop the turrets of a desert fortress looks great and if it were matched by choereopgraghy could have been an all-time iconic martial arts sequence. 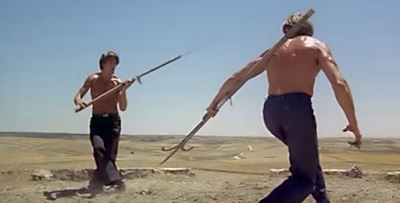 Lewis doesn't have Lee's charisma (who does?) but is no worse than Chuck Norris. It's clear though the Producer's felt he'd need some help making a splash so they surround him with locations and stars. The end result, though, is that rather than elevate him they drown him out.

The film also suffers from being entirely devoid of vibe. Just thinking how fucking COOL Enter the Dragon is. This movie is the equivalent of a pastel sweater tied-off around the shoulders. 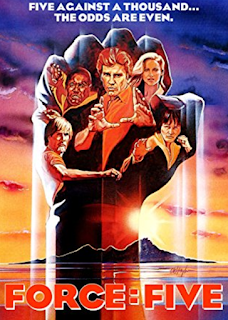 Lewis got to make a few more movies. Force: Five, directed by Dragon's Robert Clouse is better in many ways. He's supported with other martial artists, such as Richard Norton and Benny Urquidez and although it is basically an inferior re-tread of Enter the Dragon it is a far more successful action vehicle for its star. If only that movie had this movie's budget.

Or, better still, if only this movie showed off its star more than its passport and casting agent.
Labels: Reviews