Icons of the Overlooked #16 John Saxon 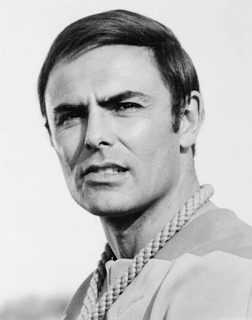 John Saxon is a constant; a perpetual cross-generational presence in Western cinema. He is an actor that manages to maintain a consistent onscreen persona while displaying great range through under-appreciated subtlety. Despite this he is still only known as a cult actor. And that's bullshit.

His list of TV credits, for starters, is incredible. Think of any iconic American TV series, from Gunsmoke to The A-Team, and he's probably had a part in it. When you include film into his resume, Saxon has had a career that started in 1954 and that still hasn't ended yet (a release in 2017, two more in various stages of development). That's incredible! He's worked with people like Corman, Argento, Craven, worked across genres and continents (he shows up in a lot of Italian movies) and has played pretty much every kind of role you could imagine. 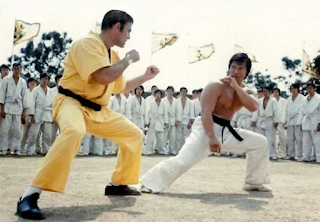 Enter the Dragon is arguably his most iconic role. Saxon's Roper is a charming rogue, saddled with debt but never morose about it. He's a shark, always moving and utterly lethal. He exudes machismo and yet subtly undercuts it resisting the temptation to take the easy route and go full Eastwood. The scene in which he deliberately gets knocked on his ass to work the odds in his first fight is played perfectly. Roper is, perhaps, Saxon's ultimate role - the sum of his parts, the distillation of his on-screen presence. He could have easily repeated this role in a string of cop/action movies but so many times Saxon avoids the easy or expected route.

Saxon has suppressed his charisma to play full-on villains several times, most notably in Battle Beyond the Stars and Prisoners of the Lost Universe. Saxon seems at ease menacing subordinates, grimacing as plans are foiled and generally chewing scenery. Saxon appears happy to play antagonist or protagonist in equal measure, yet his villains aren't always unconventional. 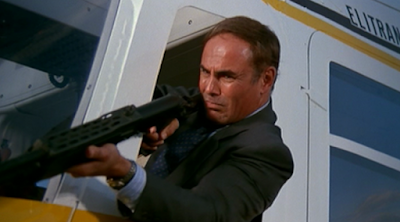 Italian sci-fi action movie Hands of Steel, for example, is a pretty disposable Terminator inspired cheapey about a killer cyborg who goes rogue and holds up in a dustbowl diner. Saxon plays the villain and entirely lacks compassion and empathy. He really is a tough, evil bastard in this. At least he is right up until the final scenes when he eventually comes face to face with the cyborg hero and realises he has no chance. He immediately becomes a cowardly figure bargaining for his life. Saxon turns on a dime and yet as big a shift as it is it never feels jarring or abrupt. It is not only a skill-full transition but a bold movie for an actor associated with tough-guy roles. 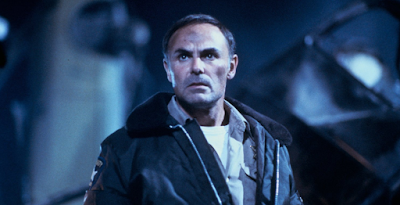 This character transition is also evident in A Nightmare on Elm Street. He plays Lt. Thompson, an overly strict and controlling Father figure perfectly setting himself up not so much as the villain but as an antagonist to the heroine of the piece. When the truth about Kruger, his demise and Thompson's role in it becomes clear Saxon sells his motivations for his character's controlling nature so that you may not agree with his methods but understand them unquestionably.

Saxon's ability to generate empathy for his characters is masterful and key to getting more unorthodox and/or morally questionable characters to work as protagonists. The Glove, for example, is a movie with a killer exploitation premise: Upon release an ex-convict plans to take revenge on the wardens that abused him by beating them to near death with a stolen armour-plated riot glove! 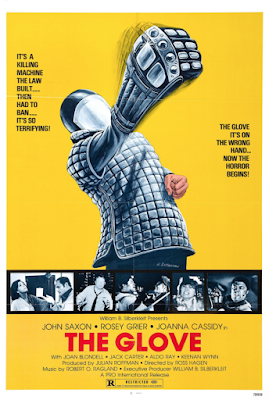 The movie doesn't quite live up to the promise of its concept and for the most part feels like a pilot for a TV show (both in production value and aesthetic). The opening moments, where Saxon's bounty hunter gets into a fist fight with a same-sex couple doesn't present the most measured portrayal of homosexuality. As the movie progresses, however, it's clear there's something much more interesting going on.

Saxon's bounty hunter, Sam Kellog, is by no-means a ruthless or indestructible force but a real human struggling to make ends meet. The above fight aside we rarely see Kellog throwing dudes through windows or beating up punks in alley ways. Instead we see him tracking down an old lady who embezzled some money and letting her go with enough to cover her trip out of the city. We see him building leads from sources both inside the force and out and, most importantly, we see him spending time with his daughter. You see a recent divorce has left him in serious debt and with a daughter he is at risk of loosing altogether. As a result he is forced to take on sightly riskier jobs like, I dunno, hunting down a hulking ex-con with a riot glove.

What adds even more depth to the movie is the treatment of race. Our ex-con is a huge and intimidating black guy but is never portrayed as an outright villain. When not dressed in riot gear we see him going about every day business in his run-down tower block, buying groceries, chatting with neighbours and playing music for the local kids. Every time we cut to him we see a community, when ever we cut back to the white people we see greed, gambling, corruption and betrayal.

Kellog is desperate for money to give his daughter the life she needs and is defeated at every chance. He is down trodden and barely surviving. He is not even given power through violence as when he does open fire and kills a bounty it leads to an investigation, shakes him up and ultimately adds more obstacles to him getting that big score. Very unusual for a 70's crime thriller. 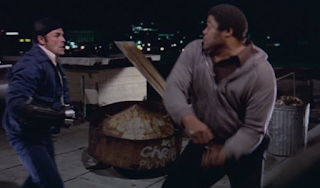 The finale, where Kellog dukes it out with the glove wearing badass, doesn't play out how you'd expect. There is clearly a social conscience and sensitivity at play here and although there are still some problematic elements the movies feels like its heart is in the right play. This is primarily due to Saxon imbuing Kellog with sadness and determination. Despite being a man in a violent world who gambles his money away you cannot help but sympathise for him.

So why Saxon is still seen as a cult actor is beyond me. There was real mainstream charisma backed up with genuine acting ability and a willingness to play against type.

On a side-note I think he would have been great in any number of super-hero characters. Doc Savage, The Punisher, Wolverine, Nick Fury - he could have played any of them perfectly.

John Saxon is a frigging treasure, a joy the moment he pops up on screen and a vastly underrated actor.