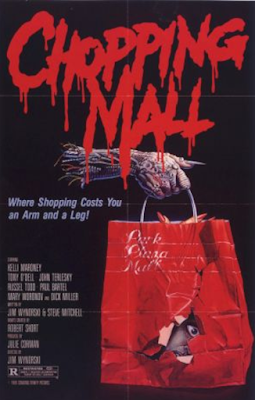 It sometimes feels weird recommending something you know most of your audience will have likely seen. Chopping Mall, for example, is a bonafide cult classic and one that I fully expect most who are into this kind of thing will have seen long ago. It has, however,  escaped me until the time of writing this. And so I may be late to the party but I still managed to have a lot of fun.

Automated security bots are introduced to patrol a mall but a lightening storm has made them go haywire to the detriment of the group of teenagers who have stayed beyond closing hours for a party.

Jim Wynorski operates in the same sphere as Corman and Olen Ray - gore, nudity and tongue lodged in cheek. The opening of Chopping Mall features speeded up footage, double-takes and slapstick while the fast-food joint the kids eat in is covered in posters of movies either made by the Director or Production team. Although the build up is nice there was a worry that leaning on the humour and self-awareness a little too much might rob the film of its stakes. Thankfully once the movie slips into slasher mechanics and the robots go on the hunt the film generates some genuine excitement.

The siege aspects are genuinely tense, the deaths count and our final girl, decked out to look like waitress Sarah Conner, is a badass. The robots, although goofy looking in an endearing way, also manage to generate some menace. 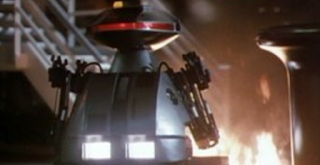 That is not to say that the fun is drained from the rest of the movie. Wynorski manages to balance both fun and edge in manner far more measured than one would expected from a killer robot in a shopping mall movie.

For starters the deaths are joyful. A couple of early electrocution deaths fall a little flat but once they start shooting War of the Worlds style death rays I was positively giddy. Considering the low budget feel of the film there is some real production value on display. The shoot-outs twixt robot and teenagers (who have procured firearms from a sporting store) are big and destructive, there are explosions and full-body burns and even a wicked exploding head. 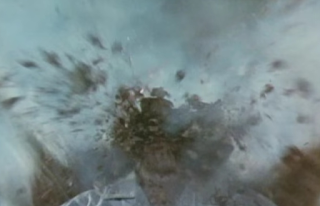 The film feels like it could exist in the same world as Robocop (released a year later) as both the design of the robot and the light satire of commercialism feel consistent, only this ramps up the teen slasher aesthetic for more surface level, but equally satisfying, thrills. Cult gold. 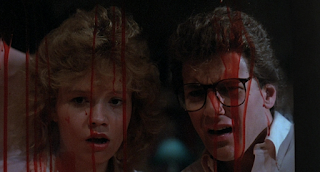