Icons of the Overlooked #14: Trevor Goddard

Even those familiar with the most obscure of action stars might not be able to place Trevor Goddard immediately. His highest profile role, outside of TV work such as JAG, was as Kano in Paul W.S. Anderson's Mortal Kombat. Aside from that he mostly popped up in made for home action movies. This, combined with his untimely death, meant that he was only able to build up a small body of work most of which was under-the-radar. Goddard's film work didn't allow for a lot of range but he absolutely owned the role he was often cast in: the action villain.

Goddard is like a cross-breed of Colin Farrell and Craig Fairbrass; his brick shithouse frame generating a deep and rasping British (sometimes Australian) accent along with a variety of tics and gesticulations making him appear intimidating, charismatic and watchable. He was brilliant at playing arrogant and psychotically violent arseholes while remaining weirdly likeable. I'll confess I've seen none of his TV work and only a handful of movies but those I have seen showed enough of this actor to make me want to see more.

Assault on Devil's Island AKA Shadow Warriors is a proto-Expendables movie that sees an elite team made up of c-list icons such as Hulk Hogan, Carl Weathers, Shannon Tweed and Martin Kove take on the equally 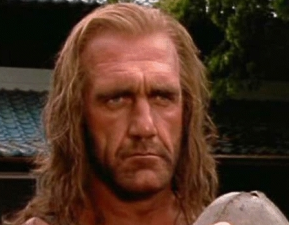 c-list Billy Drago. Goddard has fun as the ex-member of Hogan's team who initiates the lamest plan in action history (to strong-arm the US government into releasing Drago's drug lord by kidnapping their national gymnastics team) only to find his scheme messed up by Hogan and buds. Weathers and Cove are always good value and Tweed, though often forced to appear in only her pants, shows considerable aptitude for both action and humour. Hogan, unfortunately, seems to want to play it straight and stripped of his bleached handlebar and shouty antics ends up just lumbering across the screen looking like Herman Munster has just rolled around on a Barber Shop floor.

Thank Christ for Goddard then, who makes up for Hogan's monotone turn by acting like a WWF wrestler and yelling his lines with the requisite verve. It's not his best role and the movie is clearly cheaper than your average actioner but it's not without its charm. Remember those Saturday afternoon behind-the-scenes movie shows that showcased the stunts from a movie you'd never heard of? I think this was the movie they were talking about. 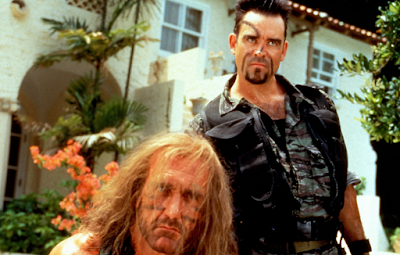 In the same ballpark, though considerably better, is the intensely undervalued Men of War. Dolph Lundgren gathers a team of mercenaries to persuade the indigenous population of  a remote Asian island to vacate so some shitty rich people can exploit the location's natural minerals. They don't want to go and so half the team, Lead by Lundgren, side with the natives and prepare to fight off the other half of the team and the local Militia. This Militia is lead by Goddard and within a minute of appearing on screen he manages to steal the movie. In under 60 seconds of being on camera he perfectly constructs the most repulsive piece of shit bad guy and yet does so with a disarming amount of charm. He's bad, he's mental and he's just the right shade of pantomime. The scene where he executes a corporate takeover of sorts is played brilliantly by him while his climatic bare-knuckle brawl with Lundgren is a beaut.


The movie itself is actually very good. The natives are handled in a way rarely seen in these kinds of movies and this is primarily achieved by spending time developing them as human beings before introducing the mysticism and guerrilla tactics usually used to reduce them to stereotypes. Although this section of the movie is slow it's really engaging and uses the varying talents and presences of the cast perfectly. When the action does come its pretty bloody good. This movie has got heart, craft, some fine kills and creates a scene-stealing role for Goddard.

I love Mortal Kombat but even I am acutely aware it's hardly a fine adaptation of the game. The scale and mythology is wasted and the casting isn't a home run either. Linden Ashby is charismatic enough, but his pastel shirt wearing pretty-boy doesn't come close to the cocky cage fighter the game suggests. Christopher Lambert's performance consists of him being Christopher Lambert only this time wearing a hat while everyone else just wears the costume of the character, rather than actually brining them to life. Cary-Hiroyuki Tagawa is great as Shang-Tsung if only by virtue of being Cary-Hiroyuki Tagawa but Goddard is the only one to add something his character. 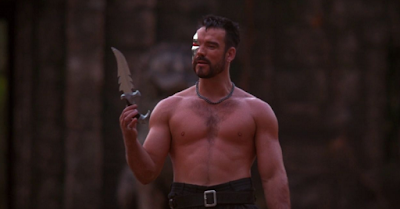 Goddard turns the balding, Judo Gi-wearing cyborg from the game into a spitting, crass badass who, like the roles above, is infinitely more interesting and watchable than anything else going on on screen. It's a tiny part (some dialogue and one fight) but its enough that once he's taken out the movie is noticeably missing something. Games designers clearly though so too, as future versions of the character seemed to draw from Goddard rather than the early game designs.

Whether he was on the verge of a bigger break is difficult to say (his last movie performance was only a tiny part in the first Pirates of the Caribbean) but the work he did produce demonstrated an actor right at home in ensemble action movies. He's the kind of actor that would have been a great addition to Dutch's team in Predator. It's a crying shame he didn't get to headline at least one action movie of his own before he died. Watch any of the movies above (start with Men of War) and tell me otherwise. 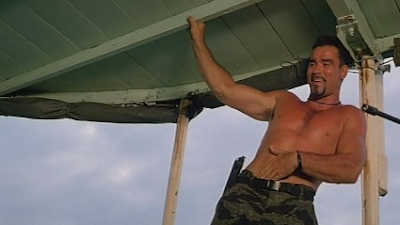