Malastrana AKA The Short Night of Glass Dolls (Aldo Lado, 1971) 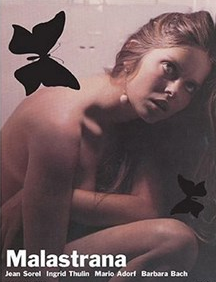 Malastrana opens with the lifeless body of Gregory Moore, an american reporter working in Prague, being discovered in a garden. He is whisked off to hospital where he is pronounced dead and scheduled for an autopsy.

Then we hear Gregory's voice as it wonders why the Doctors can't tell he is very much alive.

As the countdown to this soon-to-be fatal procedure ticks away Gregory must search back into his memories in order to piece together how he ended up seemingly dead in the hope of finding some clue as to how he might communicate with the doctors who are about to cut him apart. As his mind casts back we see him investigate the disappearance of his girlfriend and how this leads him to solve a puzzle that somehow centres on a strange club.

Malastrana could so be easily classified as a Giallo. A foreigner in a strange city looking for a missing girl while presumed guilty of the crime is a classic set-up of this sub-genre. While it fits with the narrative structure, however, stylistically it is a far different beast. A slow burn investigation with only a couple of murders taking place, and these mostly off screen, the movie is missing the lurid thrills associated with the classics of the sub-genre. I'm not trying to offer some concrete judgement on whether this is or isn't a Giallo but if you go in anticipating a primary colour soaked murder-fest you'll miss on all the real pleasures this film has to offer.

Malastrana is not concerned with being flashy or urgent, nor particularly complex. The mystery, such as it is, plays pretty routinely and don't think you're going to get a huge twist ending (well, perhaps you do... more on this later). What the film has got going for it is an undefinable sense of foreboding. Despite it being fairly routine and relatively tame by comparison to other films of its kind you can't help but feel that something is very wrong from the moment the first frame hits your eyes.

Ennio Morricone's score is masterful. Beginning playful and at times melancholy it becomes something anxiety ridden and filled with dread without you ever noticing the transition. The score lays the tracks for this train to drift out of familiar territory while slowly, covertly rumbling towards the end of the track.

I can't really talk about the ending. It isn't a twist, as I have said, but it has the impact of one. Building it up too much will only raise expectations that it won't meet and yet it is important that you know the film goes somewhere should you find its relaxed pace somewhat taxing. Whatever the ending is I'll tell you this: It delivers a satisfying one-two punch of the bizarre and the macabre.

The movie isn't for everyone and it certainly isn't perfect. What it is, though, is a simple mystery story wrapped in a brilliantly conceived framing story that takes you by the hand and quietly leads you somewhere you may not have expected, or chosen, to go.