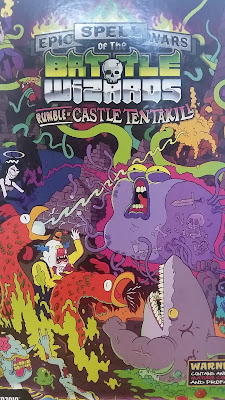 Take on the role of a master wizard and construct devastating spells to inflict damage, score blood and unlock powerful treasures to defeat your rival wizards. 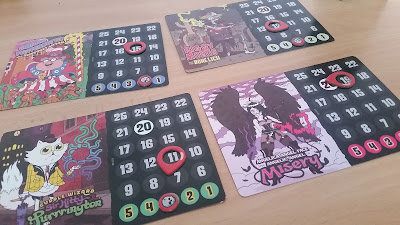 Each player takes a Wizard character card, sets their health at twenty and their blood (the games currency) at zero. They then draw a hand of eight spell cards and unleash hell on each other. A spell can consist of up to three cards made up of Source (who is generating the spell), Quality (the dash of creativity) and Delivery (the monstrous creature the spell conjures). Only one of each card may be played and they must be played in that order, however a spell can consist of one, two or three cards. 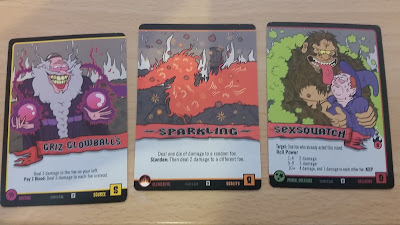 The player who laid the lowest number of cards goes first, resolving the cards in order of play. The combination of cards can lead to a multitude of effects aimed at random targets. Blood earned can be spent to increase the effects of cards while treasures can be added to give special bonuses. When a wizard's health counter hits zero they are dead and out of the round. Last wizard standing wins!

With such a simple game mechanic the table play flows pretty easily allowing for lots of strategising, deception and betrayal. Damage is inflicted in a huge range of ways depending on the combination of cards you play from simple dice rolling to swapping a certain class of cards with other players and dealing the equivalent amount of damage as you do. A card standee is exchanged and can earn you blood but also make you a target for certain attacks making it an item you may want to take for yourself or inflict on other players. Since targeting can often be designated by who has the highest/lowest health you can find intended targets change mid-spell leading to some unfortunate damage dealt to players you are trying to side with. It's almost impossible to stay loyal - it's every wizard for themselves! One of the games many pleasures is reading aloud the spell name, also constructed from a combination of separate elements: 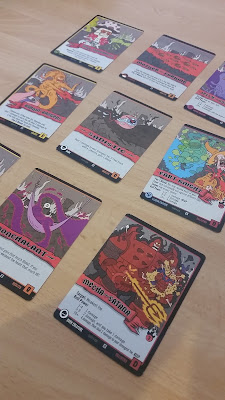 This is a gorgeous looking game. Neatly packed into a small box the cards, rules and playing pieces are adorned with wonderfully grotesque cartoons that balance just on the edge of crass. The box boasts the game contains "awesome" mature content and profanity, but nothing approaching Cards Against Humanity shock tactics. The world this game builds is fun and the build quality is robust and wonderfully tactile. 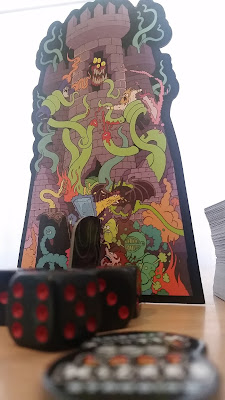 The content pretty much ensures this is not for younger kids but beyond that anyone can play. Once you've nailed the central mechanic the game can be as simple or complex as you want. This particular version is an expansion of the previous set Duel at Mt. Skullzfyre (although both can be played as standalone games) and this one adds in a few new rules. Myself and the Gogol family found it super easy to pick up and play though if you have any concerns maybe go with the first release. This was a relatively inexpensive game that can be picked up pretty quick, plays as fast as you want and has found its way into regular circulation at Chateau Gogol. Great fun!