Skip to main content
Labels
Posted by Doctor Gogol May 28, 2016 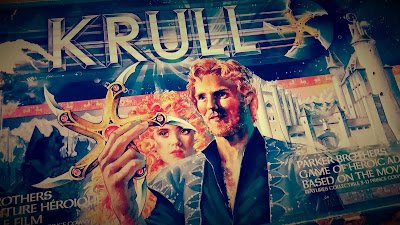 Total Tabletop isn't just dedicated to the latest and most advanced tabletop games. We've always got time for vintage games, especially ones based around genres or properties in line with our little corner of the movie world. So with that in mind we travel to the besieged land of Krull and take on the role of Prince Colwyn, searching for the lost Princess Lyssa who has been kidnapped by the Beast and hidden away in the Black Fortress. We must gather an army, battle Slayers and changelings, discover the location of the Black Fortress and destroy the Beast with the awesome power of the Glaive. 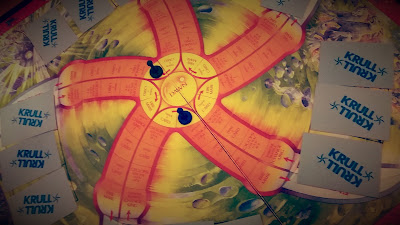 I am a massive Krull fan. Seriously. I'll happily admit it's not the best movie ever made but that is entirely not the point. The movie has texture and tone and soul and we are carried from each evocative fantasy diorama to the next by James Horner's beautiful and magical score. It didn't really do that well on release and certainly didn't lodge itself in the cultural consciousness the way Star Wars did and as such available merchandise had been minimal. So when I recently discovered there was a boardgame based on the movie I scored myself a copy on Ebay. I suspected it might be a bit shit but would you know it ain't half bad. The basic mechanics revolve around a stack of cards placed face down on the board. In there somewhere is the Glaive and the Black Fortress and these must be collected to advance to the final part of the game. You move your piece around the board collecting cards and regularly stopping in the centre space. The centre space represents dawn in Krull and this means that the player to land on it must secretly swap two of the cards. Essentially at Dawn the location of the Black Fortress changes. It's this porting of the basic conceit of the movie that impressed me the most. Alongside this, you must battle Slayers for chances to peak at cards, accuse each other of being changelings and generally compete to the first to snag both sought after cards. The winning player goes onto the final round that sees the addition of a new playing space. In the centre rests Lyssa, while the Beast lingers at one end and Colwyn at the start. Dice are rolled and the combination either advances Colwyn or the Beast and the first to reach Lyssa decides on the outcome of the game. 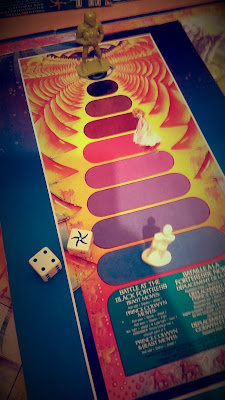 Krull is competitive and there are plenty of opportunities to screw each other over. Peaking at cards and shifting needed ones into places other players might forget and using action cards to steal the Glaive are the most common ways to mess with your opponents. The changeling mechanic, however, is where things can get fraught. Each player amasses an army of soldiers (cards depicting characters from the film) who do battle with the Slayers to allow you to look at and/or win the cards they protect. Some spaces allow you to accuse your opponents strongest players of being changelings and if the player fails a save roll it takes them out of their hand. The rules are a little fiddly and the frequency of this happening can get a little frustrating, but rather than a game that just requires you to shuffle pieces across a board there have been real attempts to get players plotting against one another.

The box, board and cards are adorned with some gorgeous artwork. The dice have little Glaives on them and the game comes with two figures representing The Beast and Prince Colwyn which, although not massively detailed, are nice little collectables. 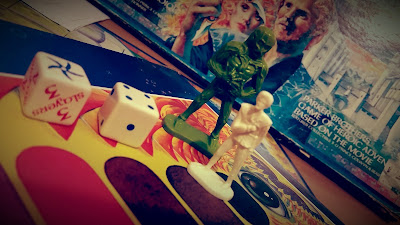 I've been playing this with my nine year old and She got into it quickly and yet there is enough above the table play to keep it interesting for adults. There can be a lot of rule checking required, which slows things a little, but overall this is a really simple game. 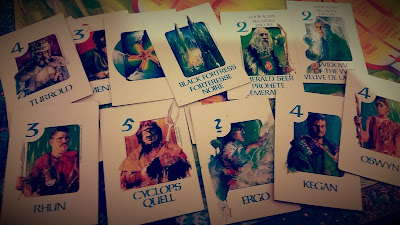 Krull is no cheap cash in. There has been a real attempt translate the thrills of the movie into game play mechanics and they are largely successful. The game is handsome and there is enough going on to engage a range of player types. It's out of print and so you'll have to look for second hand copies but if, like me, you want some Krull merch on your shelf this is a good purchase (and it likely won't stay on the shelf too long).