Skip to main content
Labels
Posted by Doctor Gogol May 20, 2016 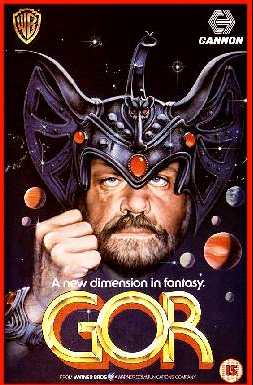 A put upon teacher is blown out by his girlfriend and goes on a research weekend alone. His theories regarding an ancient world and how it relates to a weird stone become reality as he is ported off to the world of Gor; a fantasy dystopia ruled by an evil tyrant. There he discovers an aptitude for adventuring that he uses to help villagers usurp the tyrant's rule, recover their sacred stone and find a way to get back to the real world.

Gor, like most eighties' fantasy movies, is a mixed bag. It is actually pretty well produced. The actors are all built like Frazetta heroes (no stringy weeds in furry pants here) and the costumes are actually nicely put together. This doesn't feature anything close to the world building of Star Wars, not even that of Sword and the Sorcerer, but the frame is always filled with breadth, depth and detail in ways that other films of this era are not. Where it misses out, though, is in its reluctance to get messy. This is a bloodless and sexless affair and yet it doesn't try to go for a romantic fairytale adventure vibe either. Some of the costumes are downright brazen and as close to rendering their wearers (both male and female) as naked as they can be while still covered up. Women are sold as slaves, there are brandings and people cast into fiery pits - pretty brutal stuff. It's just that every scene of violence is neutered leaving it neither satisfyingly savage nor innocent enough to be fun. 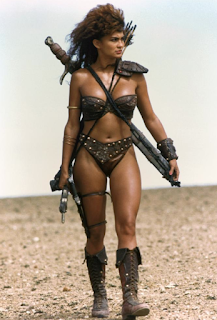 Thank Christ someone had the bright idea to cast Oliver Reed who stomps through this movie dressed like Princess Aura from Flash Gordon, acting as if he's ignoring any direction. He is, as always, fantastic to watch and his character's demise is a keeper. I'm chuckling about it to myself as I write. The lead plays both the nerdy scholar and the dashing hero well, Arnold Vosloo pops up in an early role (and not in one you'd expect) and Jack Palance shows up for a couple of scenes. I can't remember why Jack Palance shows up, or who he was playing. He gets the last line of the film and it seems to be setting up for the sequel but I really didn't have a clue why he was relevant to the story. But hey, any Palance is good Palance right? 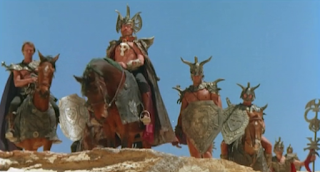 The battles aren't particularly well put together, its not as violent nor fun as you'd want but it is better than most. If you're in the mood for some fighting fantasy and you have exhausted your Beatsmasters and your Deathstalkers this would make for a diverting and mostly satisfying 80 minutes.
Labels: Reviews