Skip to main content
Labels
Posted by Doctor Gogol May 17, 2016

Alien Undead isn't a great movie, it doesn't even have any great moments, but by god does it try its damnedest to please. 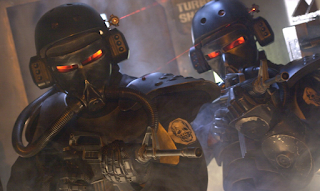 On paper the movie would read as if made specifically for me: an all practical horror space opera featuring flesh eating monsters and gun-toting galactic marines. So why didn't it work for me? Many will be put off by the choice to shoot on what appears to be digital video (I say that like there is any other choice for the micro-budget filmmaker) and although this will eliminate the less forgiving viewers we at Total Cults are born of tougher stock.

Less palatable is the at best passable acting spoilt by an almost entirely looped audio track. Bad sound can make even the most expensive movie seem like amateur hour and the choice to ADR dialogue is to be commended, however the voices don't always match the lips and in addition seem weirdly dissonant, almost as haphazardly executed as the dubbing of most 80's Hong Kong releases. This, along with a script that functions as a string of cliches makes it hard to engage with characters or situations at all. 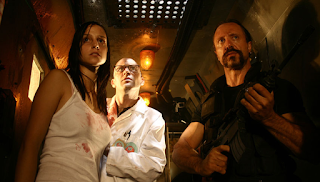 As such I frequently found my attention drifting, especially as the narrative quickly descended into a conventional 'squad under siege in alien infested complex' scenario repeated to infinity since Aliens. And yet, every time my attention returned I was treated to something pleasurable on screen.

The production has obviously been heavily influenced by 80's genre movies (perhaps a little 90's straight-to-video movies too) and yet rather than place these influences up front to the point of parody it felt like an authentic movie of the period, not unlike one of Roger Corman's Spaceploitation flicks. From the (awesome) miniature space crafts to the low-fi space ship interiors through to the armoured space marines it all felt so satisfyingly earnest. The lighting; greens, reds and blues spread through plumes of dry ice, rendered every little corner of their sets atmospheric. It never achieves the artistry of Argento but effectively replicates the garish and brazen aesthetics of Lamberto Bava's Demons. 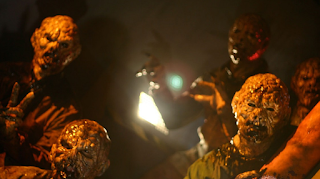 In fact Demons in space isn't too far from a decent comparison. The monsters are delightfully grotesque and, more importantly, achieved through practical effects. Even the incredibly derivative final boss creature (basically a xenomorph) is a satisfying actor in a suit effect. Also practical; squibs. There are a number of scenes were soldiers mow down waves of creatures and the splatter flies furiously from good-ol' detonated blood sacks. I genuinely didn't detect the stink of CGI blood at all and it is a rare thing to be able to say that about a B-movie nowadays.

So the textures and the atmospherics are all on point. Alien Undead isn't like the army of movies that think they are homaging Grindhouse cinema but are actually just ripping off Planet Terror. It's heart is in the right place, yet the unfortunate voices pasted over dubious performances and a plot that I could barely remember the details of a day after watching it mean it isn't easy to recommend. Had I seen this at a local film festival I might have applauded the ingenuity, but it wasn't able to hold my attention on a regular night's viewing. Makes for an awesome trailer though.