Skip to main content
Labels
Posted by Doctor Gogol May 23, 2016 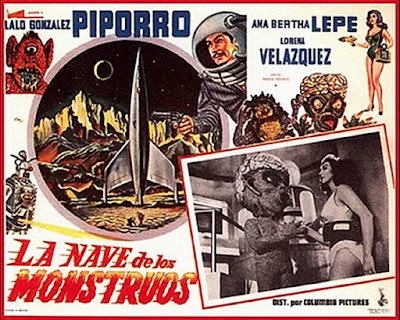 In order to repopulate the all-female Venus, two attractive female aliens travel to Earth to find a man with which to procreate taking with them a menagerie of monsters and their robot wrangler in case things go south. They land in Mexico and meet Lauriano, a chancer who is prone to burst into song and tell tall tales at the local drinking pit. One of the aliens falls for his charms while the other has far more nefarious plans to seduce him and then move onto world domination.

This Mexican sci-fi comedy is great fun and although there are plenty of hokey B-movie tropes to giggle at there are also enough nicely handled moments and bizzaro creative choices to generate genuine entertainment. The lead is charming and naturalistic, and his scenes where he tells his crazy stories are well acted and staged. There are some well constructed laughs in here and its nice to have a hero who is actually a flawed comedy character, albeit with a little pathos, rather than an uber-butch macho alpha. In many ways he is the 1960 version of Sean of the Dead’s titular hero. 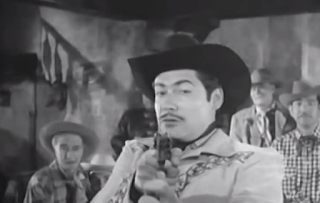 Also nice is the moment that he meets the alien seductresses for the first time. Rather than just assume knowledge in order to move the plot along, the aliens first cycle through a variety of languages until they hit on Spanish. They also freeze Lauriano everytime he mentions something they don’t understand (Mexico, the Circus, etc) so they can look it up on their portable computer and get up to speed. It’s a nice little bit of business that gets exposition and character across in an amusing way. 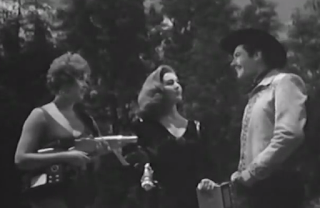 The monsters are great. They are, of course, really ropey costumes but the designs are awesome. We have a Cyclops, a massive-faced Martian type, a furry insect thing and a living skeleton. Although the outfits are ultimately unconvincing a lot of effort has been put into the smaller details. The head pieces aren’t static and have moving eye stalks, mouths, flappy ears and at times pulsating flesh. They are all also oddly articulate, especially the low but debonaire voice attached to the skeleton. Both the Cyclops and big-face showed up a decade later in Santo Versus The Monsters which might suggest their funky designs achieved an iconic enough status to warrant an homage (although I suspect the suits were just knocking about in some store room and were cheaper to repurpose). 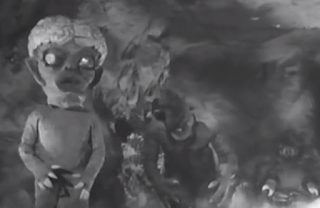 And yes there is some unintentional humour as well, but since the movie isn’t po-faced it all feels like part of the fun. The main source of amusement for me was the sound design. As a sci-fi movie there are plenty of effects used to make doors, machines and robots sound like advanced technology. The problem is they have seemed to source their sound effects from the Carry-On sound library. Each futuristic noise sounds like its punctuating an innuendo or a skirt being blown up. Automatic doors open to slide whistles, people teleport to silly percussion and the robot is constantly emitting rude sounds. Its amazing!

It’s also oddly appropriate considering the subject matter: This movie is all about sex. The aliens want to get knocked up by Earth men, the robot tries to bang a jukebox (“nice bulbs babe”) and the monsters all want to sleep with the lead alien. That particular scene is joyful. The woman reclines as each creature shuffles in close and attempts to woo her. There is nothing like the sight of a dwarf in a leotard and a giant paper-mache head trying to be suave. They even start to bicker amongst themselves as to who gets her, which leads to this bit of movie gold:

But it’s the robot that steals the show for me. The constant comedy sounds mixed with the shuffling of the aluminium and cardboard costume creates a fantastically ramshackle cacophony often louder than the dialogue. I found myself frequently giggling as two actors try to get through dialogue as this vast metal creature with a perpetually alarmed expression lumpered about in the background completely ruining the audio take. Add to that the fact he is a randy bugger and he can teleport and he might have just pipped TOBOR the Great as my new favourite robot. 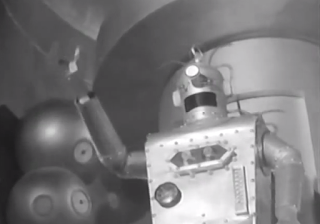