As I mentioned in my previous article European Superheroes tend to be dicks. Although technically on the right side they are generally self-serving womanisers with little scruples when it comes to taking human lives. They also have a habit of stealing shit. Superargo isn't quite as bad as that (he's no saint, but next to someone like Argoman he looks like Captain America) but in his first movie outing it is clear he is little more than a Bond figure in red lycra.

We open with Superargo, a masked wrestler, battling Le Tigre in the ring for the championship. After a nicely choreographed fight, Superargo accidentally kills his opponent. This leads us to a psychedelic opening credits sequence which finds aggressive colours and shapes pounding away at our eyes as Superargo screams and writhes in anguish. Hardly the most conventional opening to a superhero or spy movie.

Things settle in once we get to the main meat of the story. Horrified by his mistake, Superargo plans to give up wrestling. This coincides with an old army friend of his, now a government agent, wanting someone to help them out with a super villain who has been stealing radioactive materials. As such, the government decide to send a disgraced wrestler into the field over a trained agent. Now, to be fair, there is some degree of reasoning to this. Superargo submits himself for a number of tests showing his new employers that his blood coagulates so fast he won't bleed from knife wounds, he can withstand heat and cold far greater than a regular agent and he can hold his breath for 7 minutes. Since Superargo never takes off his mask, he goes through this interview process in full costume. Dress for the job you want eh?

Despite being unconventional in superhero terms, it pretty much sticks to the beats of the spy movie. As such, Superargo is laden with gadgets for his mission. Now if you thought Bond's gadgets were oddly specific (when did you ever see Bond hand back a gadget to Q and say "What the fuck was that for?") then you should really check these out. Aside from a  sports car and speedboat, Superargo is given a micro-television camera hidden in a woman's broach and a miniature Geiger counter hidden in a plastic cocktail olive! Take a moment to check the picture of Superargo for a minute and then tell me that those  devices are designed for that guy to wear or use. No, these have been developed by someone who can foretell exact situations, such as a smartly dressed woman needing to be tracked via video relay. It seems they are into hiring clairvoyants as well as superheroes. Oh, and the last gadget is given to Superargo's girlfriend. It is a fucking great grand piano that happens to have a radio in it, so that she can contact her boyfriend while he's on his mission.

Kitted out, Superargo sets off on his boat to assault the super-villains secret base. It's a nicely produced secret base and is the setting for some exciting fight sequences. Of course

being a Euro-hero, Superargo doesn't just 'biff' and 'pow' the bad guys but also uses an array of deadly weapons to kill them. Aside from a machine gun which he uses to mow down a considerable number of bad guys he also strangles someone with a tire iron, drops mercury on some henchmen and uses a flame thrower. Actually that doesn't count as he doesn't kill anyone with that, he instead uses it to knock a door down (I don't know how that works). The action isn't limited to the base as there is a speedboat chase, an underwater fight and a dangling off a helicopter stunt. It's all nicely put together and the exciting score helps considerably.

It all ends, however, with an exploding island model. Now, it's always great to see miniature effects but two things that always betray the scale are fire and water. So an island exploding is never going to look great, especially one that I estimate is the size of a large potato. Hardly a satisfying bang, but it doesn't hurt things too much.

A sequel, Superargo and the Faceless Giants (Pablo Bianchini, 1968), followed but is noticeably cheaper. Aside from some nice retro cyborgs it's all a bit pale in comparison to this nicely produced, exciting and fun action-spy-superhero movie. 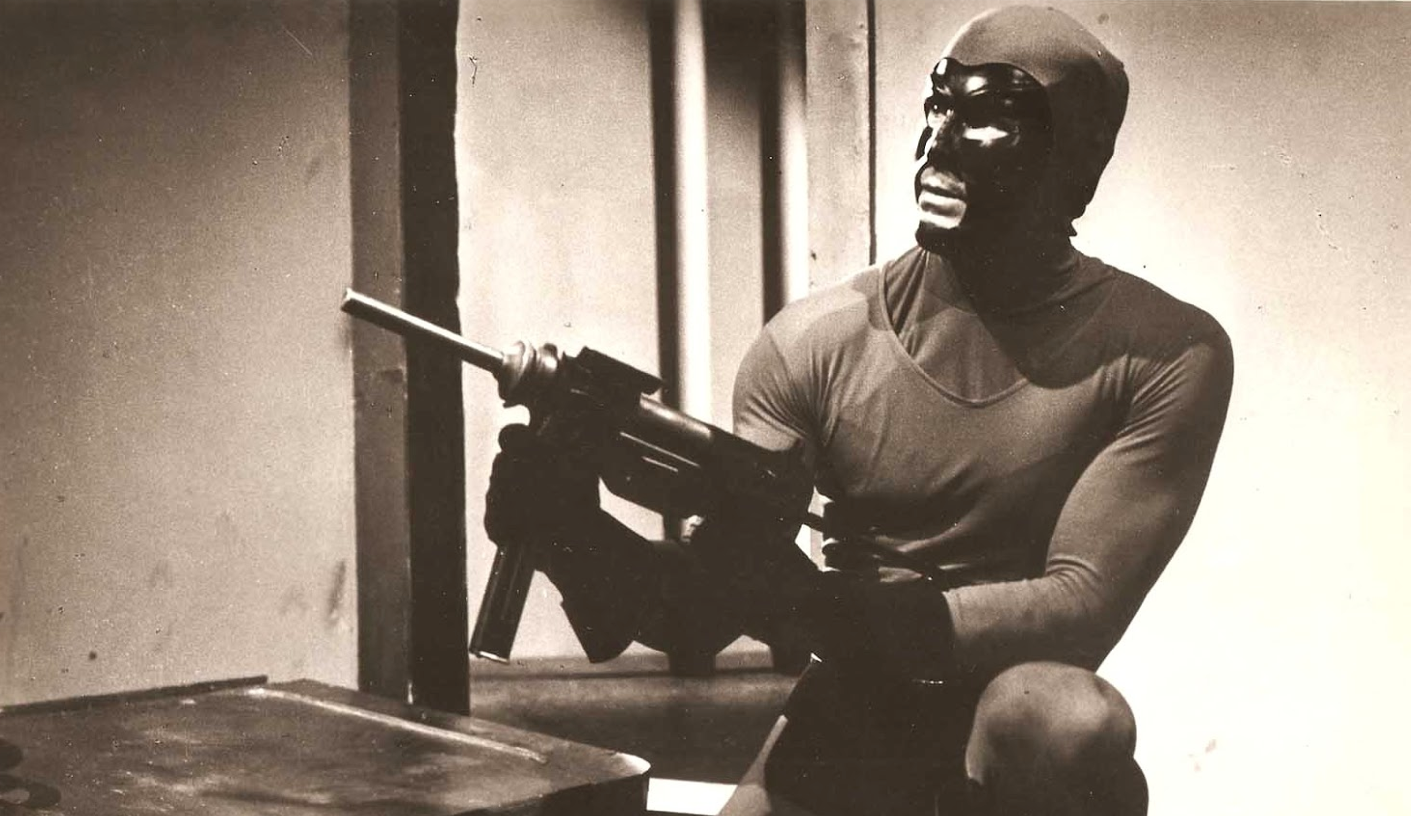