Last time I wrote on this subject I highlighted three fairly unsatisfying movies that happened to have genuinely awesome moments. This time, however, we are talking about a different kind of awesome. The moments I have picked out this time round didn't provoke gasps, or cheers but flat-out belly laughs. These moments are awesome for nothing but their absurdity.

I find it hard to call Full Eclipse a bad movie. In fact even as I write this I'm second guessing my classifying of this movie as un-awesome. For a start it's about an elite team of black-ops police werewolves. It's got Mario Van Peebles, Patsy Kensit and Bruce motherfucking Payne. Bruce Payne for crying out loud! Payne makes any movie more awesome with his steel glare and his uncanny ability to take any line of dialogue and make it sound both amazing and awful AT THE SAME TIME! The movie even has a scene were Kensit and Van Peebles turn into werewolves during sex. How can it not be great? Well, the fact that it has all this and more and still manages to play boring is its biggest crime. The film is so lifeless that even a fight with a bear-sized mega-wolf on top of a swinging cargo crate failed to thrill me. I even watched this thing twice to make sure and I was still surprised by how much it misses the mark. 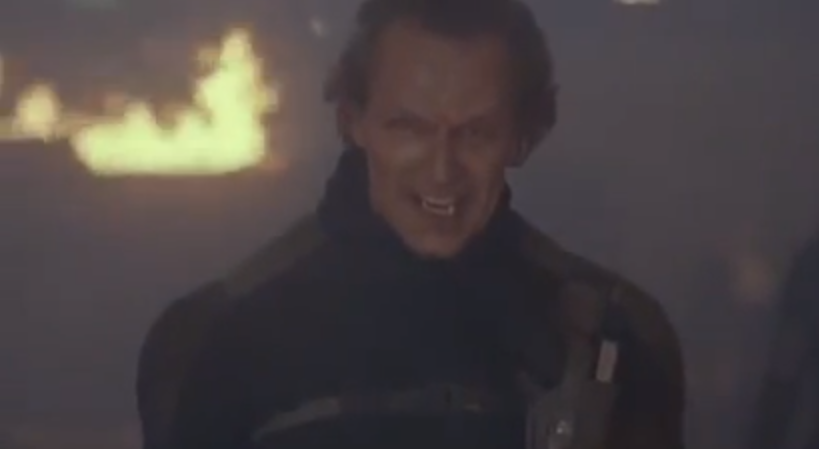 Or course it doesn't help that the opening moments actually play more ridiculous than any of the werewolf action that follows. We begin with Van Peebles and his partner arriving to deal with a hostage situation at a club. Now, please take a moment to inspect the layout of the club in the below still. Have a go at estimating the height of the ceiling in particular. 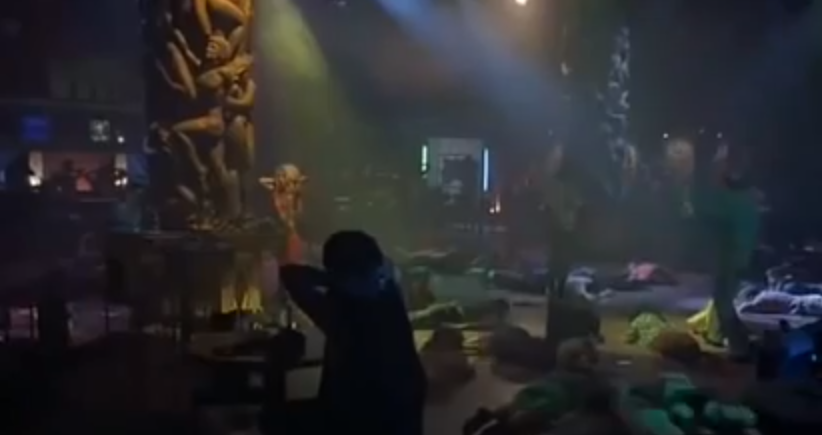 Being the unconventional, not-waiting-for-back-up kinda cop he is, Van Peebles convinces his poor partner (the one with the massive fucking target on his forehead) to climb onto the roof of the club and work their way through the air ducts that run across the ceiling. At this point director 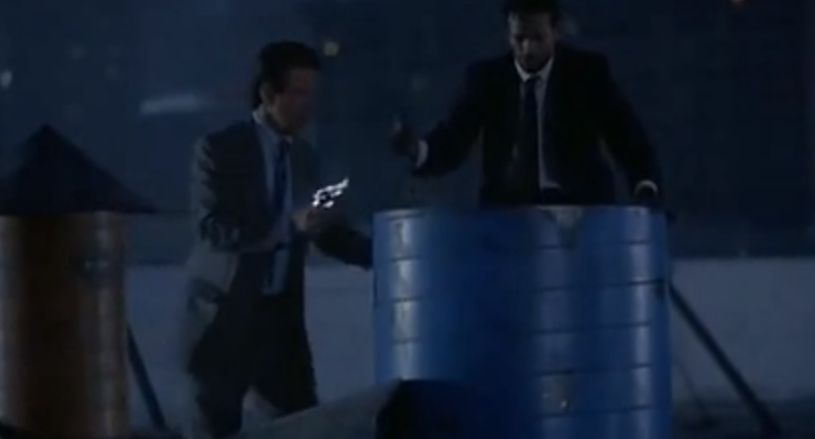 Hickox does a good job of setting out the geography of the club and goes someone way to establish the stakes. The bad guys are well positioned and surrounded by hostages, ensuring any wild gunfire would result in almost certain collateral damage. Things get worse as upon hearing the cops coming a mile off the thugs fill the partner's air duct with bullets. Van Peebles is left like a sitting duck with a dead partner and a strategy defying situation below. This calls for tact and precision and his solution is wonderful in its simplicity.

He screams “nooooo” loudly, then basically falls out of the air duct, dropping (insert your estimation of height here) feet while firing both guns manically. Amazingly, all the bullets find their target, wiping out his partner's killer. Even more amazingly crashing into what looks like a concrete floor from that height doesn't seem to hurt him at all. Far from it in fact, as he is then able to leap into the air firing two guns like Yosemite Sam again managing to miss the paniking hostages and wipe out all of the bad guys. I wonder if they show this scene to new cadets as a textbook way to deal with hostage situations? 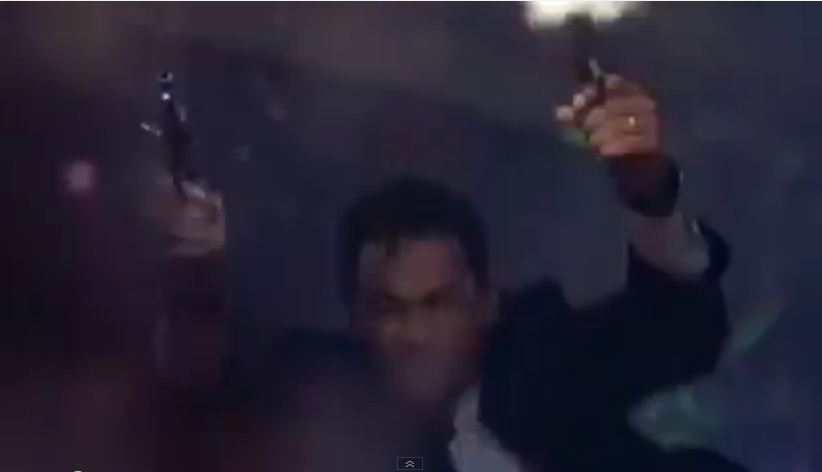 Truth is the scene plays really well. Hickox is channeling John Woo in this scene and as an opener to a big shoot-em-up it's a lot of fun. The problem is this is supposed to be Van Peebles before becoming a super wolf-cop. Establishing him as having a near-indestructible body and lighting reflexes kind of undermines the moment were he gains the exact same powers later. To be honest, nothing he does as a werewolf seems anywhere near as impressive as the feats he performs while what this movie sets up as a normal human being. It's like beginning Spider-man with nerdy high-school Peter Parker throwing cars around and flying and then expecting us to whoop and cheer when he gets bitten by a spider and starts exhibiting less impressive powers.

Full Eclipse should be a lot more fun than it is, but it never really matches the absurd delights of this opening sequence. Or does it? Even now I'm thinking a Bruce Payne werewolf-cop movie has to be brilliant. Ok, I'll give it one more go.

Caged Fury is, like most women in prison movies, a exercise in hoping the last twenty minutes of women liberating themselves and taking power away from oppressive men justifies the hour plus of eroticised sexual abuse that came before it. Some of these movies just about get away with (just), this one not so much. What this movie does have is a blistering performance from martial arts master Richard Barathy in the wonderful role of Dirk Ramsey. Here he is: 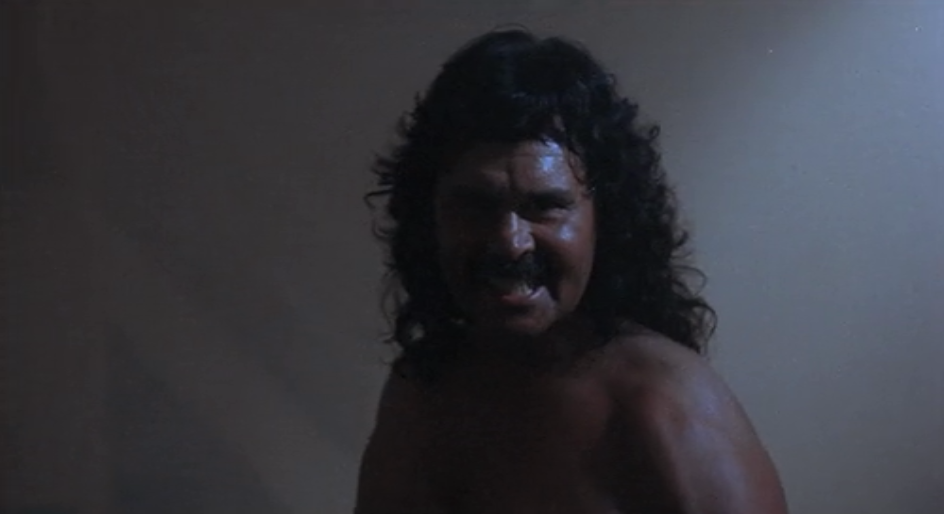 Looks a lot like The Fantastic Four's Thing has just fallen out of a drag queen's wardrobe. He plays the right hand man of the movie's hero (Erik Estrada in a turtle-neck). The two make quite a macho duo, especially when Barathy, dressed in a silk karate outfit, is smashing bricks with his bare hands at a local beach before getting on his Harley Davidson and riding off to do battle with the forces of evil. 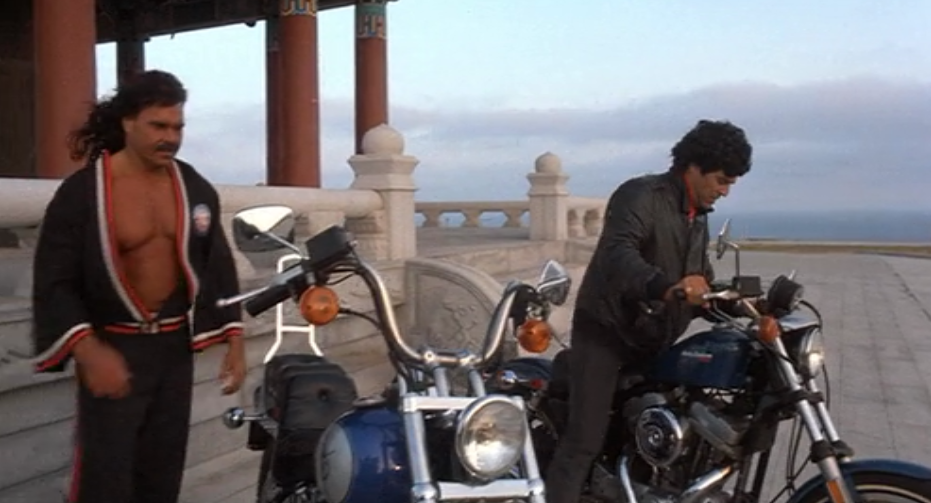 And what a battle! The end fight sequence proves that, despite looking like a lobster-red lump of plasticene that's been found down the back of the sofa, Barathy is quite the brawler. He pounds through the prison, dispatching evil guards with his hand-to-hand mastery and freeing scantily clad women from their cells. At one point he is locked in a cell himself. Barathy, of course, just KICKS THROUGH THE FUCKING WALL and escapes! 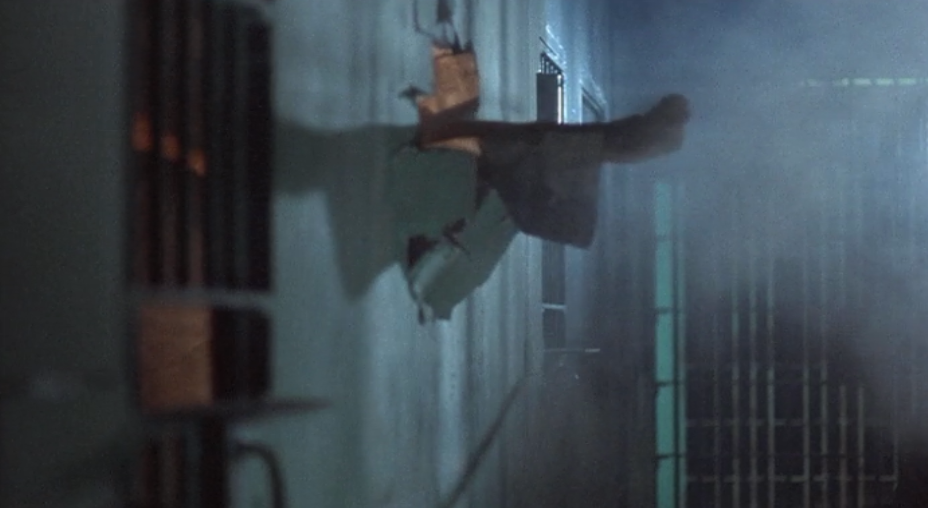 In terms of choreography it's a fairly wooden martial arts sequence, but one that builds and builds and is both efficient and brutal. One is left in no doubt that Barathy is the real deal and the not the kind of person you'd want to say rude things abou... oh. 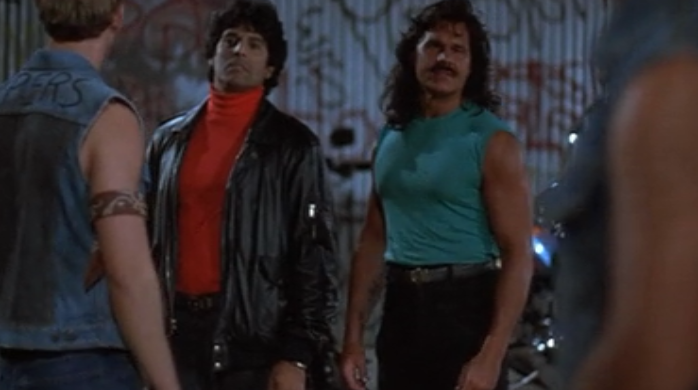 Caged Fury is a horrible little movie in many ways, but if you can make it past the ugliness the sight of this permed beast kicking the shit out of everything is well worth it. It's currently on Netflix UK.


On the surface this film looks to be a badass euro-crime thriller, unfortunately it lacks most of the intensity, brutality and inflammatory politics of those movies. It has also has a bulbous vein of comedy running through it and one it is unclear whether the makers were aware of. For example, surely casting the following actor as the tough and charming action hero is a gag right?

Right? Or how about the climax of the movie where Henry Silva wanders round a nice mansion dressed like he's just been hanging out at the bar of a golf club while carrying the biggest fucking (self reloading) bazooka I've ever seen. A bazooka he uses not to destroy vehicles or buildings, but that he uses to shoot people. Surely he's overcompensating for something. 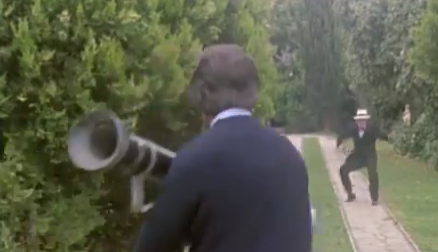 None of these baffling decisions are signposted as gags, nor does the tone of the film suggest anyone was taking this anything but seriously. Had the film been consistently ridiculous it would be a thoroughly entertaining watch but aside from these moments the film is mostly flat. Well, apart from a certain training montage that made me openly guffaw. We cut between Silva, the Human Poodle, an elderly safe cracker and a beautiful grifter seemingly preparing for an upcoming heist/sabotage mission, but actually competing in a 'who has the silliest scene' competition.

- Amazingly, the fluffy guy comes off the least ludicrous with his test driving of a getaway car and only gets an honorary mention due to the awful wig and fake 'tache worn by the stunt driver.

- Bronze goes to the beautiful grifter who manages to reduce the stakes considerably by hitchhiking a lift with a passing jeep. The officer driving is somehow so enchanted by her big hair and severe eye shadow he proceeds to drive her round the top secret chemical base they are trying to break into, allowing her to take photos of the set-up. If it is that easy to break into why all the need for this frigging practice?

- Silver goes to elderly cracker, who on the surface seems to have a fairly conventional bit of business. He is charged with practicing cracking a duplicate safe. However, as the safe is delivered to his tiny little study he has a couple of barely enthusiastic nude dancers loitering and generally getting in the way. They then perch on the sofa and watch him faff about with his nobs.

- It is Silva that wins the gold, however, as he is testing out some kind of drug-tipped stun-dart. Being the morally adjusted fellow he is, he hides in a bush and fires at a series of random, innocent and increasingly absurd passers by. Firstly, a squabbling couple get it in the neck. Then, two labourers who seem to be up a ladder and painting a tree (?) take a fall, but it is the cardinal on a bicycle that is the cherry on the cake.

The only thing lacking in this wonderfully ridiculous little montage is some kind of awesome eighties track, yet even without it romps home as the standout moment from this movie.

Many of you might like Full Eclipse (even I'm convinced I do, even though I'm sure I don't), Caged Fury buries some fun in a mound of misogyny while Killer Vs Killers is, well… let's just say it is hardly recommended but if you do find yourself watching there are some moments worth sticking round for.

You are most welcome.