I know precious little about Marquee Pictures other than I own three DVDs they distributed in the mid-nineties and each one features a scene of brilliant absurdity despite the films around them being wholly routine.


Dolph Lundgen and that Montel Williams star in this unimaginative Under Siege photocopy set inside a nuclear silo. A maniac and his mercenary crew have hijacked a nuclear missile and are threatening to launch it unless the President, played by Roy Schneider, shoots himself on live TV. The film lacks any of the excitement, scale or invention that you'd want to the point that you begin to envy Schneider's president for at least having a way out of this.

Luckily the films awesome moment comes right at the start meaning the second it stops you can eject the disc and pretend you watched a really fun action short. The film opens with Lundgren's Major Frank Cross pursuing stolen launch codes through the streets of Chicago in a car chase that, to begin with, seems fairly ordinary.

Until Cross drives his car off the roof of a multi-story car park and continues the chase across the rooftops. Shit yes.

As chimneys and television aerials are mown down left and right the cars veer into each other stopping only to leap from building to building. It is a brilliant escalation of action that is surprisingly well-realised and pretty bloody exciting. Unfortunately this level of achieved ambition stops once the scene is over and the film quickly becomes, and remains, an entirely anaemic affair. 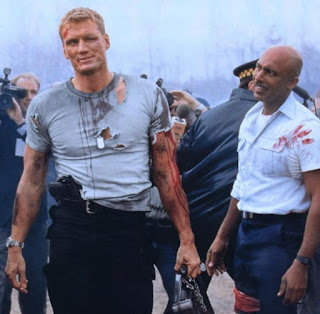 
In this kind-of cyberpunk Point Blank Rutger Hauer comes back from the almost dead looking for those that double-crossed and shot him. This brings him into conflict with the ever awesome Mark Dacascos. The whole thing is fairly sleazy and violent throughout and the mix of Hauer and Dacascos is a definite attraction, yet the narrative still manges to plod along, at times bordering on the inert.  Yet just when I was about to write it off as gratuitous and boring, it suddenly became gratuitous and ludicrous. And I mean that as a compliment.

Hauer's character is scoping out a party full of the rich and the corrupt while at the heart of the party a boxing match plays out. Very quickly security catch onto to Hauer and follow him, forcing him to divert from the main party and go behind-the-scenes. It is there he encounters two fighters training on punchbags in a corridor (for some reason). One is male and one is an inexplicably topless female. Security lock the doors to each end of the corridor trapping Hauer with the fighters. He shoots the guy immediately then goes toe-to-toe with the topless fighter ensuring she maximises her screen/jiggle time. He defeats her and just as we are pondering why on earth she was topless a second, only this time completely naked, woman runs out of a nowhere and tries to throttle him. For some time indeed. It's fairly bewildering, regressive and, frankly, funny as hell. This scene is closely followed by a sex scene, a Battleship Potemkin reference and a competent shootout. In short, the forty minute mark is a good place to start watching. 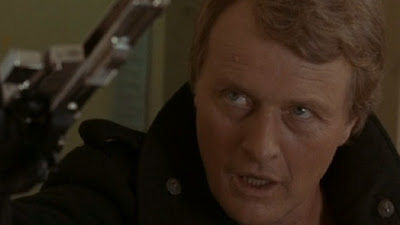 A bit of an oddity this one. Mixing traditionally loose-gun cop action with X-Files style alien conspiracy and, well, some other bat-shit stuff The Silencers comes to life in one pretty impressive action sequence.

A number of army green Sedans (you know, the kind that used to flip over in every episode of The A-Team) is escorting a petrol tanker with a mysterious cargo (driven by the guy that played Decker in The A-Team too... hmm) when it is attacked by pupil-less, fanged and super-powered men in sunglasses and suits. Lone wolf Agent Rafferty (Jack Scalia) leaps to the rescue of the driver, a good friend of his, and what follows is vehicular carnage of a quite spectacular standard. 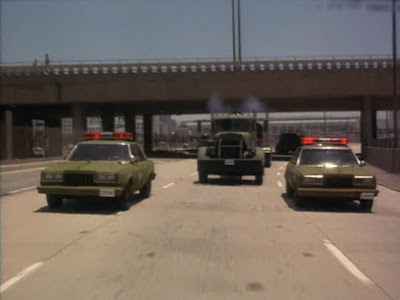 The scene is incredibly inventive with a number of exciting gags peppered throughout. Rafferty manages to be in his car, out his car and at one point dangles from the tanker mere feet from its wheels. Cars flip, spin, explode and launch to heights that would allow them to clear a house all rendered with razor-sharp editing. Captured from a number of angles each stunt is cut to expand the moment to its fullest or repeat impacts to imbue them with intense kinetic energy. 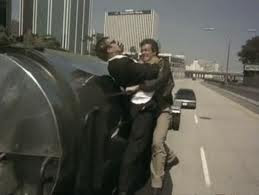 This all builds to the one of the most absurdly awesome car stunts I've ever seen.  Remember in Die Hard 4.0 when McClane kills a helicopter with a car? Same thing, only Rafferty doesn't leap to safety first.  He just drives through the tanker, screaming in anguish at the loss of his friend as he does, and straight into the helicopter. As pretty much everything explodes driver and car are catapulted high into the air resulting in the kind of crash that would make you wonder if the planet would have survived, let alone the driver.  Rafferty walks away without a scratch.

Mad Max 2 and Raiders of the Lost Ark both having exquisite lorry-based action set pieces and this genuinely isn't far off either.  It is also not too difficult to see some similarities with freeway sequence in The Matrix Reloaded released a good few years after.  To be fair the action throughout is well handled but this major set-piece mid-way through is an especially thrilling sequence.


So a big thanks to Marquee Pictures.  You may have released some mediocracy into the world but buried in amongst the dull are moments worth watching over and over again.