The European superhero is an odd little archetype that mixes the fun capers of traditional sixties superheroes with something a little edgier.

Italy was at the forefront of these movies matching its villainous Diabolikals, such as Diabolik, Kriminal and Sadistik, with the heroic Superargo, Argoman and the Three Supermen (amongst others). 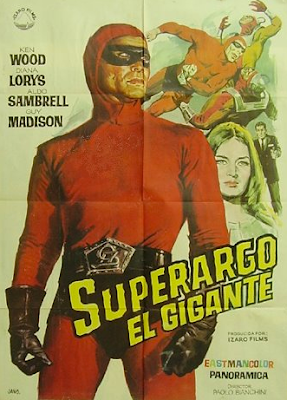 Superargo, a wrestler turned crime fighter wears an awesome costume that manages to make him look relatively intimidating. It is worth considering that his first outing, the fairly hard to come by Superargo Vs Diabolicus (Nick Nostro, 1966), was released the same year that Adam West hit the screen as Batman. But while West plants his tongue in his cheek and his belly behind that enormous belt buckle, Superargo cuts a fairly convincing super hero figure. He also has no problem gunning people down in cold blood. Not all that heroic then.

Things get weirder, however, in Argoman (Sergio Greco, 1967). Beginning with this yellow and black avenger being placed in front of a firing squad we are quickly treated to a demonstration of his psychic powers as he convinces them to all turn their guns on each other. Like Superargo it seems he has no problem with killing his enemies. That is because Argoman is not only in possession of incredible psychic ability but a bloody wobbly moral compass. He is a thief, wanted for a number of crimes yet always one step ahead of the law. Like the Diabolikals he lives a life of glamour and sophistication off his ill-gotten riches and is something of a super misogynist. This is a man who has a database of previous conquests he calls whenever horny. A database that when choosing a girl it patches him through to a camera feed in her bathroom. He also abuses his psychic power, mentally persuading a woman in a passing hovercraft (?) to come to his island to partake in a bet. A bet that if she loses results in her having to sleep with him. Again, not exactly heroic.

Curiously, he looses his powers for six hours after sex which could be read as a metaphor for sexually transmitted diseases, and as such a criticism of his lifestyle, or simply as women are his literal weakness. I imagine it is the latter. Like Superargo he also has no issues carrying a gun. Do you see a pattern developing here? 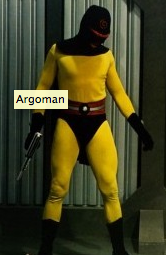 The Three Fantastic Supermen (Gianfranco Parolini, 1967) further cements this archetype. Starting as two fantastic supermen, they are a couple of costume wearing criminals who use their acrobatic skills, suction-cup boots, bullet-proof costumes and the odd metal yo-yo to commit daring robberies. They are persuaded by the third and newest superman, an FBI agent, to help fight on the side of right by taking down a counterfeiting/cloning ring. In fact it only this factor that separates heroes from villains. Both Argoman and the supermen end up fighting for the law despite their natural antagonism for it. They are not naturally heroic, but are willing to be so if it is of benefit to them. So not heroic at all really. 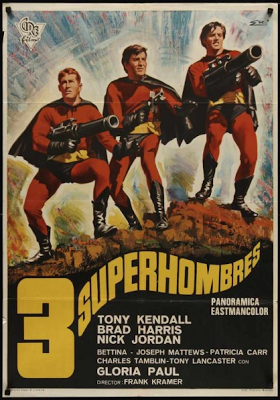 What is also evident that the big bold superhero scores that we are familiar with now where not what was associated with these characters. Many of these films go with Bond-esque guitar twangs and cool jazz. Having said that, The Three Fantastic Supermen features something not unlike the Benny Hill theme, some circus music and a hell of a lot more kazoo music than you would expect from a superhero movie. Still, it's a damn sight better than the theme to 3 Supermen Vs The Godfather.

The Three Fantastic Supermen was extremely popular and saw no less than ten sequels that took them to Tokyo, the Wild West and the Jungle. Despite a changing roster of actors the costumes remained the same as did the need, apparently, for one of the supermen to be something of a gibbering idiot. Many of these sequels were co-produced by other european countries and a couple were made entirely as Turkish* productions.

Turkey's most famous superhero film is of course the mighty 3 Dev Adam (T. Fikret Ucak, 1973).  Like many of its most famous films this is something of a knock-off/homage to existing creations, featuring Turkish versions of Santo, Captain America and something resembling Spider-man. Whether the Turkish supermen movies were homages or official sequels I'm not sure but more interesting are Turkey's own (or less-obviously ripped-off) superhero creations. 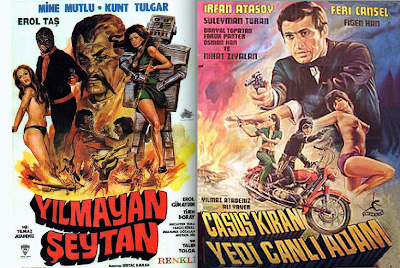 In both Casus Kiran** (Yilmaz Atadeniz, 1968) and The Deathless Devil ( Yilmaz Atadeniz, 1973) we are treated to two more traditional heroes. They are good guys, yet like their Italian counterparts are happy blasting away at bad guys. They also both seem to have a comedy sidekick that likes to dress as Sherlock Homes. 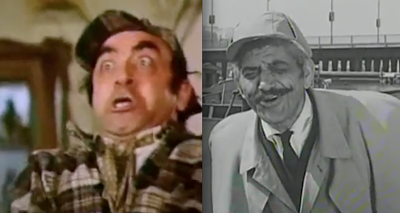 These films have strong, brutal fight scenes and nice stunt work but don't quite have a grip on narrative logic and continuity. It is also evident that despite heroism being a little more prevalent in these films, the mentor characters aren't quite up to the job. In The Deathless Devil our protagonist visits the office of his step-Dad who tells him his real father was a famous, and now dead, superhero called Copperhead, shoves a camp outfit in his hands and promptly instructs him to go and carry on his legacy. Thanks Da.. I mean, guy who has been lying to me whole life and is now pushing me towards vigilantism with no training and a flimsy lycra outfit. Thanks for taking a whole thirty seconds to destroy my life. 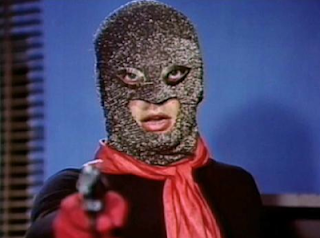 While minding the door doesn't hit him in the arse on the way out, Copperhead gets off to a flying  start by failing to notice the guy with the huge knife standing by his step-twat's secretary. Coming back to the office moments later (for no reason at all and with a smile that suggests he wasn't listening to the life changing conversation, well... sentence, his prick of a step-Dad just had with him) Copperhead stumbles across the bloody carnage. Copperhead proceeds to engage in his first fist-fight which, despite being in a small office, manages to break enough continuity rules to fill a batcave (including changing to an exterior location at one point). The film carries on much this way, right up until the end which features “hilarious” hero and side-kick acrobatics. Seriously, next to the God of Gamblers willy-cutting this is one of the best endings to a movie ever. 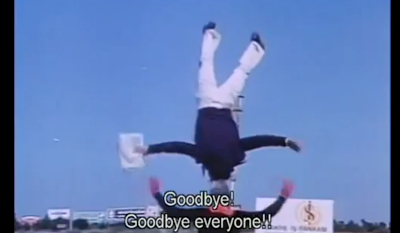 Like the Italian movies these films showcase more spy-orientated music, although in both these cases musical cues lifted from John Barry's Bond scores. At one point in Casus Kiran they give up trying to hide it and let the Bond theme itself kick in. 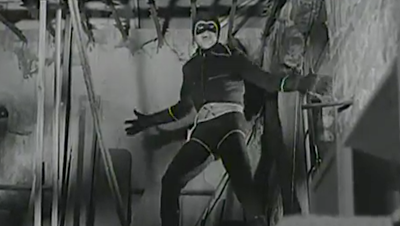 Despite the fairly straight heroics there is occasional nudity and blood-letting which are a little jarring, yet the bright costumes, impressive acrobatics and, in the case of The Deathless Devil, a fucking amazing robot, mean they are fun in their own kind of way.

It would appear that decades before Miller and Moore started deconstructing the superhero Europe was already at it. These characters often use their abilities for their own selfish needs, only fighting the good fight when they absolutely have to and even then gunning down bad guys left and right. This is most likely due to the inclusion of spy movie conventions. Eschewing the hard to produce super powers and science fiction elements these characters, and their movies, are nothing more than Bond clones in spandex. If you're a regular here at Total Cults you will know that as much as we love Bond we don't see him as a hero and the juxtaposition of the costumed do-gooder with the violent, womanising spy gives these films a frisson you might not expect. European superheroes fight, shoot and sleep around, have fast cars and swinging pads and all the things you would associate with the sixties spy movie.

Of course this isn't all of them. I haven't mentioned Fenominal or Kaliman or the heroes from the rest of the world including Goldface and Flashman. But it is the heroes featured here that best represent the european superhero and their allure: high-camp capers with real edge. 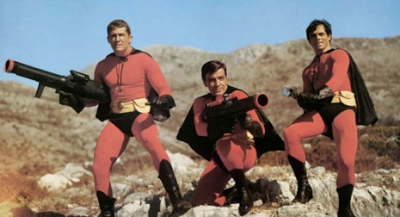 *I'm including Turkey Europe.  I know it kind of is/isn't, but I'm running with it.

**Not an original hero per-se, rather a clone of classic radio and serial hero Spy-Smasher.  Since Spy-Smasher is fairly generic anyway and this character is well removed from him it's hardly a straight rip-off.