That opening paragraph got away from me a little towards the end, so I'll ditch the puns and get straight to the point. The Might Peking Man is friggin' amazing. After catching his wife in bed with his brother, down on his luck Johnny is persuaded into travelling to the Himalayas to track down a mythical Kong-like ape. When he gets there he finds the mighty beast, named Utan, raising a jungle girl, Samantha, as his own. Johnny and Samantha fall in love, which puts Utan's nose right out of joint. If that wasn't bad enough he is shipped back to Hong Kong where he is chained and meant to perform for an audience which, let's face it, is only going to end in tears.

I'd like to rise above this, but we have to focus on Samantha the scantily-clad jungle girl for a little bit. The orphaned survivor of a downed plane, Samantha has become one with the jungle and formed a close and thankfully platonic relationship with the ten-storey monkey. He has obviously brought her up as well as he could but alas has failed to school her in the ways of putting some bloody clothes on. She spends her time bounding around the jungle in the tiniest loin cloth and one-strapped jungle bra (the strapless side being glued to her unsupported left boob). With the amount of running she has to do it is a miracle she only falls out of it a few times. One might suspect the producers almost did this on purpose. 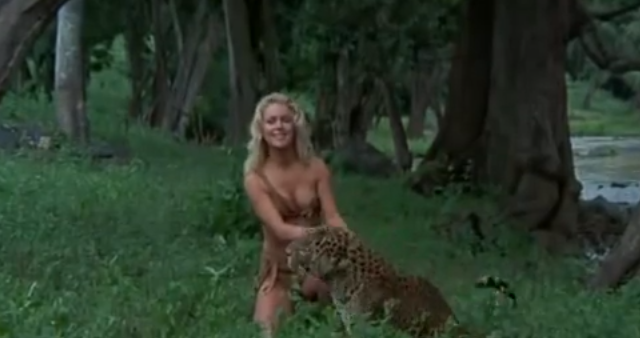 Irrespective of the gravity-defying powers of her skimpy top Samantha seems like a lovely and very attractive young lady. As well as befriending a monkey, she seems to be good friends with a cheetah (might be a leopard). So close to this fine feline friend is she it even gets in on the slow-motion falling in love montage. As she spins it round in circles and wears it like a scarf Johnny leaps and claps like a maniac while the poor beast looks utterly fucking bewildered.

That's a real cheetah by the way, so props to actress Evelyne Kraft for not getting mauled. Despite this idyllic back to basics lifestyle Johnny manages to convince Samantha and her ape-friend to come back to Hong Kong. Of course returning to civilisation means that Samantha will have to cover up a little, so thank Christ for Johnny and the far more respectable outfit he has waiting for her.

Nothing says modesty like PVC hot-pants. Once in Hong Kong the tension builds nicely, with Utan getting all riled up at having to perform while Samantha, the only person that can calm him, gets jealous over Johnny's ex and does a runner. Unfortunately the producers felt this wasn't enough to justify the monster really getting angry and so instead decide to drive the tone of the film into a ditch by having someone try and rape Samantha. So gratuitous and unnecessary is it, however, that the film snaps back into fun mode right afterwards and if you can move past the awful ectoplasmic stench left by the spectre of casual rape there is still a lot to enjoy. Namely some top model city smashing.

The miniature work here rivals Toho's movies, as Utan chases down Samantha's attacker while throwing the mightiest of wobblers. Buildings crumble and factories explode as Utan takes on tanks, helicopters and fighter planes. It all builds to an exciting rooftop battle between Utan and the army.

Then, just as it gets exciting, we reach a giant bummer of an ending. In fact, Utan out-bums King Kong (there is a pull-quote for you). So, spoiler warning...

Just as it gets exciting, Utan goes up in flames and plummets into a fiery oblivion while Samantha is machine-gunned to death. Roll credits.

So, apart from the rather unpleasant tonal change mentioned earlier and a somewhat downbeat ending there is tremendous fun to be had with this movie. An awesome giant monkey, some great jungle locations and sets, a female Tarzan and fantastic model cities being trashed. Highly recommended.