Forgive me if I've told this story before. When I was very young my older Brother was asked to babysit me one night. My Dad had been to the video shop and asked the man behind the counter to recommend a family film for the two of us to watch. Now either the guy at the shop was an evil bastard or he was operating at the mental capacity of a pebble because he recommended Michael Mann's The Keep. Ten minutes and one exploding nazi later I was scarred for life. If it where not for that moment, however, I might never have even known The Keep existed. Released to both commercial and critical failure it remains a flawed film and one that has not been released on a physical format since LaserDisc*. I sought to revisit it as VHS was dying out and I'm glad I did because despite its obvious flaws it is, in my opinion, a film worthy of your attention and appreciation.

Set during World War 2, the story sees a division of nazi soldiers arriving at a Romanian castle keep to set up camp. The residents of the surrounding village try to dissuade them but their warnings are not taken into consideration. Soon enough, two of the soldiers accidentally unleash an evil force that brutally destroys them. The Captain, a somewhat reluctant nazi, calls it in hoping to be transferred out of there. Instead he receives an SS troop lead by a vicious prick convinced the deaths are the work of local rebels. As the two officers collide over what is actually killing their men the supernatural force gradually takes terrifying shape while a mysterious and supernaturally powered individual makes a pilgrimage to the keep to enter the fray.

With so many pieces in play it is a miracle the film remains so lacking in drama. The performances are patchy and with a lot of the backstory and mythology surrounding this supernatural conflict cut from the final release the narrative does somewhat demand the audience to “just go along with it”. The pacing doesn't help either meaning the 92 minute runtime feels an awful lot longer. That's not to say any of the above cripple the film, but they do make it a little more demanding on the viewer than it should be. What eases this is that the film is gorgeous to look at.

The film oozes production value and atmosphere, though many will be quick to dismiss the film as too “80s”. True, there is a lot of dry ice backlit with blue lights and a Tangerine Dream score, but it creates such a tangible sense of phantasmagoria that you cannot help but be drawn into this exquisitely rendered world.

What will be an issue for many is that beyond atmosphere there is little else to quench ones thirst for horror tropes. Despite a couple of splattery deaths there is, for the most part, very little blood shed. There are no jump-scares, no real moments of utter terror nor is it particularly disturbing. Some may even go as far as to question whether it is horror at all. For me it cannot be anything else. Horror can be so much more than the criteria mentioned above. Director Mann is here not concerned with cheap jolts and gushing red jets instead opting to work hard to create nothing more than an unsettling dream, a soft yet chilling landscape that just falls the horror side of fairytale. 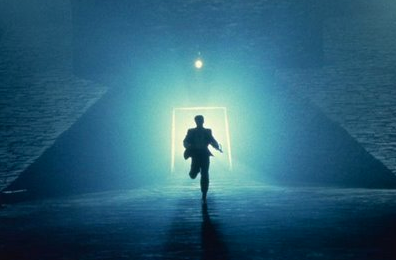 The keep and its surrounding village, a mix of actual locations and purpose built sets, are extraordinary effective in creating a nightmare world. Every dimly lit corridor, every shadowy chamber is impregnated with foreboding. When the creature finally takes form and unleashes hell on the nazis the landscape becomes at once utterly fantastical and terrifying. It feels stagey yet this only seeks to further enhance the finales nightmarish quality.

And then there is the creature itself who, depending on your threshold for rubber monsters, is either a horrifying presence or a horrifying mistake. Unsurprisingly I love it. Each of the forms the monster takes may not be entirely convincing, yet is so impressively designed and imaginatively realised that it becomes iconic and for this reason alone I wonder why the film hasn't received more attention. Surely with all the horror merchandise out there one can make room for a Molasar action figure?

It may be bloodless, slow, light on scares and dramatically inert but The Keep is still a magnificent achievement. It is a film that takes the gothic constructions of the Universal classics, the dreamy atmospherics of the 80s and mashes them together to create an aesthetic that is so vital to my appreciation of the genre that if I were to close my eyes and think of the word “horror” images from this film would appear.

The Keep is a chillingly beautiful work.

*Thanks to Ed Hennessy for informing us of the films LaserDisc release.