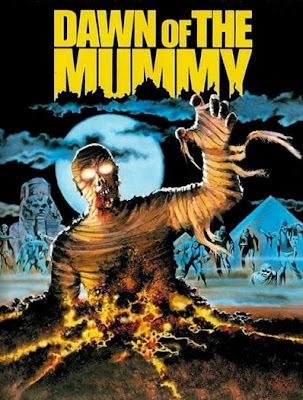 I have an affinity for the mummified undead. Of all the classic monsters they seem to be the one that few filmmakers really know what to do with. And I love an underdog.

Most of the time you have the bandaged, hobbling weapon of some ancient curse. These guys make zombies look like efficient killers. They are really slow, are normally inconvenienced even further by their constrictive wrappings and when they do catch up with their victim have little to do other than man-handle them. Of all the shuffling mummified instruments of revenge movies the only one I truly rate is Hammer's The Mummy (Terence Fisher, 1959). We then have Universal's original The Mummy (Karl Freund, 1932) that was actually a kind of re-animated egyptian sorcerer, a model re-imagined to excess in the more recent Stephen Summers movies. A shout also goes out to the lone attempt to sex up the mummy mythos in Hammer's Blood From the Mummy's Tomb (Seth Holt, 1971). But more than anything mummies are tame. It is very rare to see a mummy rip someone to shreds, or use some kind of antique egyptian blade to hack off limbs. 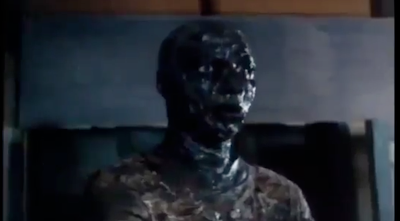 So when I hear about an Italian mummy movie that supposedly mixes the icky splatter of Fulci with the aesthetic pleasures of fine desert dust, warm orange sunlight, gold-lined tombs and decaying corpses wrapped in soiled gauze, it demands my attention. That film is Dawn of the Mummy and it is neither tight with its gore or its aesthetic pleasures. Well, maybe that is a little too generous. True, there is little ambition in the framing or the way the camera moves and it could do with generating a little more atmosphere but the sets and locations make the film look more expensive and immersive than it has any right to be and the lighting is often quite effective. It doesn't hurt that the mummies look pretty awesome too. 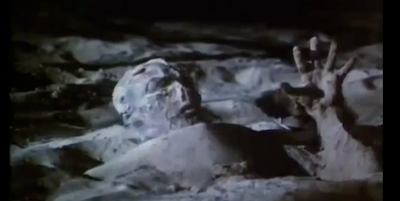 So we've got a mummy movie that promises the gore of Italian zombie movies mixed with mummy mythology and one that has enough effective imagery to easily cut an impressive trailer for. The problem is that everything else is, how should I put this... awful.

The films first problem is that it takes forever to get going. We start with a fashion photographer and his team of models stumbling across a treasure hunter who has dug up a tomb ready to raid it for all its worth. Not wanting to draw attention to the dig the hunter allows the models into the tomb to take pictures. Since the tomb is that of an egyptian sun-god, the lights used for the fashion shoot begin to re-animate the mummy that has been discovered. This takes over half an hour. Despite this, there are still deaths that occur in the tomb including beheadings and face-meltings, yet it is never explained who is actually responsible for this. Anyway, once the mummy does get off it's arse it also re-animates an army of mummies, all of which do to next to nothing for another twenty minutes or so. We don't really get any sustained chaos until the third act. 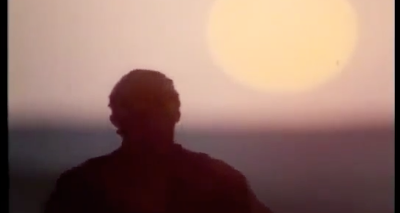 Which means that despite the occasional messy death all we have to keep us going is the chemistry of the actors and the dialogue that passes from their lips. Unfortunately the actors are grating at best and I suspect that rather being given dialogue they were just told to make it up as they go along. It is what I imagine Whose Line is it Anyway? would be like in hell. It also doesn't help that no-one in the production seems to have any insight into normal human behaviour. For example, one of the models happens to speak to Rick the treasure hunter for a minute or so. The next time they meet she has already feinted and therefore does not see him carry her to her bed. She wakes up in bed with him standing over her and rather than scream for help, she pulls him towards her and kisses him as romantic music swells. What makes this especially bizarre behaviour is that Rick is by no-means a traditional romantic lead. He looks like this: 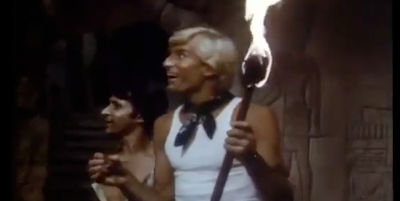 He is the films secret weapon and my favourite thing about the whole movie. It appears that having seen the other cast members perform he feels the need to act for all of them squeezing as many different ambivalent extremes into any one moment. His performance veers from the wide-eyed and maniacal rasping to a form of silent fitting. It's like watch Fred from Scooby-Doo have a nervous breakdown. Regardless of the emotion he is shooting for he is constantly hysterical, though that does not adequately describe it. Let me put it crudely, if Action Essentials provided a pre-keyed arc of ejaculate, then adding a constant jet of it to his groin in every scene he is in would not effect any reading of his performance. Screw it, see for yourself.

When we get to the gore itself it is too little too late. The mummies are basically just zombies, so much so I will now call them 'mumzies'. These mumzies bite chunks of flesh, gather round fallen people and eat their entrails and, in their worst moment of heinous be-devilry, interrupt a wedding. Only the lead mumzie gets creative, sticking a cleaver into the head of one of Rick's friends and hanging him up on a meat-hook. 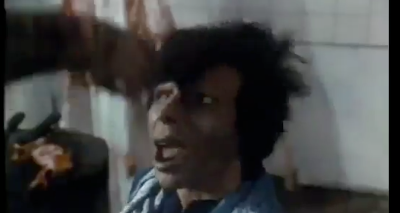 Alas even the third act is mishandled. Once our heroes turn up all of the mumzies have vanished bar our lead mumzie. They dynamite him and all celebrate winning the day, even though there is still supposed to be an army of these things milling about. Then, about ten seconds after they have celebrated the lead mumzies death, his hand bursts out from beneath the rubble. Is he coming back for more a la The Terminator? No, because that is when the credits roll.

The films final moments are a machine-gun barrage of bad choices and confusing moments and considering what we had to get through to experience them you can't help but feel a little short changed. Still, at least we'll always have Rick. 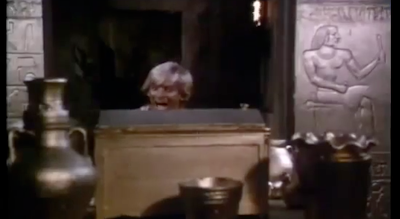