Santo and Blue Demon Against the Monsters (Gilberto Martínez Solares, 1970) 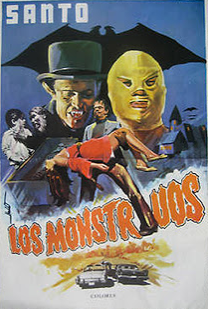 For a while I have wanted to do a full article on Santo, unfortunately I've only seen two of his films. To claim to be a source of knowledge on him would therefore be like saying i'd seen the statue of liberty when i'd only stared at her sandals. So instead I thought I'd review my favourite of the two I have seen; Santo and Blue Demon Against the Monsters. To be clear, I own the spanish language version that has no subtitles. Since my utterly non-existent spanish is a little rusty I am unable to appreciate any real nuance in the film and am entirely going by whatever visual storytelling is on offer. 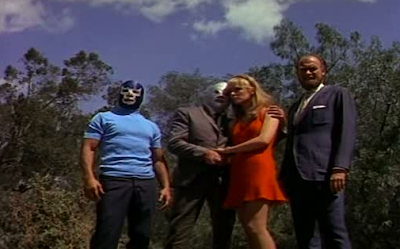 But I'm ahead of myself.  Many of you might not even know who Santo is. Wrestling is big in Mexico and Santo is the biggest, a superstar in the ring and out. His popularity was such that a move to film was a no-brainer. And so Santo started a film career that saw the production of over fifty films. Yet this was not an acting career, oh no, Santo played himself in all his films and alongside his regular partner Blue Demon went up against a host of bad guys including vampires, werewolves, martians and zombies. Like many popular mexican wrestlers Santo and Blue Demon wear face masks that never come off in the ring, in public or in film. As a result, we are frequently treated to everyday scenes of domestic pleasantries such as this: 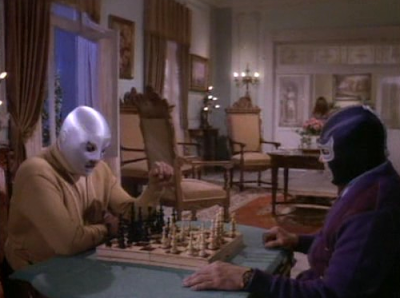 But enough preamble, let's get on with the main feature where the two biggest wrestlers in Mexico go up against all of the classic monsters at once. This film features a supergroup of monsters made up of zombies, vampires, a werewolf, Frankenstein's monster, a cyclops, a dwarf with a hunchback and this little bastard: 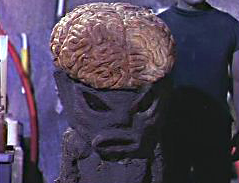 I'm presuming he is an alien and that his relevance is explained in the dialogue somewhere. I say this because all he does is shuffle around in the back of the baddie's lab. He is never spoken to, nor interacts with anyone and disappears without any mention.

When your film features wrestlers then it better have wrestling.  In this respect it doesn't dissapoint. It is by no means the extreme or acrobatic wrestling of modern day, but it is a darn sight more energetic than the british wrestling of the seventies and eighties. Not exactly graceful, the fights are fairly brutal and all shot with long, hand-held takes. This embues the scenes with a real energy without ever obscuing the fact the actors are the real deal. Of course with some of the more elaborate costumes mobiltiy becomes an issue, yet this doesn't diminish the fun to be had. Check out this monumental conflict twixt Santo and the Cyclops.

This culminates in a touching scene where the evil scientist performs surgery on the felled cyclops while all the other monsters gather round with concerned looks on their faces. It's like the moments in M.A.S.H. where it goes all serious and you'd wish Hawkeye would just fire off a classic zinger to break the tension. He never did.

The structure of the film basically consists of Santo going somewhere and being attacked by the monsters who for the most part are lead by an evil clone of Blue Demon. My favorite of these is when Santo is tricked into fighting a zombie in the ring and just as he defeats him all the monsters rush the stage. It's like a royal rumble with the Universal Monsters. 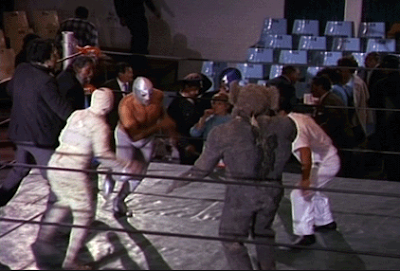 Although the structure of the film gets a little repetitive it does manage to throw a few curveballs at you. For example Santo takes his girlfriend to dinner (still wearing the mask remember) in a tiny little restaurant/cafe. They sit at their table and look off to camera. We then cut to this enormous stage that is clearly not part of the same location where a series of lengthy and expensive musical numbers play out. Occasionally we cut back to Santo and friend for reaction shots but for the most part we have to sit through these elaborate numbers. It's like cutting between the cafe set in Allo' Allo' and the end number of Singin' in the Rain. But that is not all, for although this sequence is clearly set at night when Santo is chased from the restaurant by the monsters, who inevitably attack him (seriously, he cannot go anywhere), we suddenly find it is the middle of the afternoon. It's almost as if someone took two entirely different scenes from the film and dropped them in a bin full of footage from a musical before printing the lot in some random order.


Tonally, the film feels a little like the 60's Batman series, though I suspect without the self-awareness, yet this too is contradicted with some moments of real violence. Although the monster attacks are mostly bloodless, we do see Frankenstein's monster stamp someones head to a pulp. In addition, when Santo and Blue Demon stake the vampires it gets pretty messy indeed. Though it is worth mentioning these guys are so hard they don't bugger about with hammers, they bang them in with their bare hands! 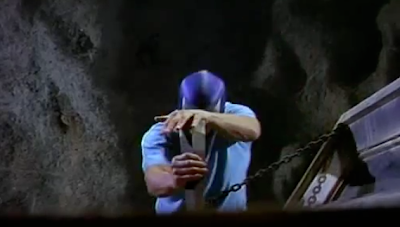 If you haven't gathered by now this film isn't for everyone. Which is good becasue it's not easy to track down. You may also feel that I'm being a little sarcastic in my review but this is not the case. I have great fun every time I throw on this film to the point that I am considering launching a Kickstarter project for a project I'm going to call Kendo Nagasaki Vs the Cult of Cthulu.  But until that day we'll always have Santo, Blue Demon and these bad boys: 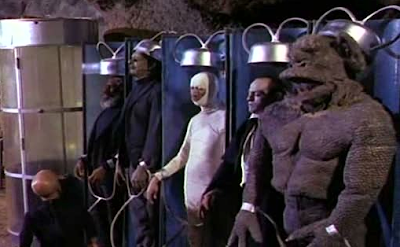