The pace of production slows as we near the end of the Lone Wolf and Cub series.

A full year after the last film Misumi returns and produces the bleakest film of the series. Initially hired to retrieve a document by the Kuroda clan, Ogami is then hired to kill the Infant Lord of the Kuroda as well. This secondary mission being arranged by a secret sect within the very same clan. And that is simplifying it.

Children in peril is something of a theme in this instalment and not merely because of Ogami's infant target. During the course of the film Ogami's son, Daigoro, is embroiled in a pickpocket scheme while they visit a nearby town. He is caught and marched though the town square by the authorities and threatened with a beating should he not reveal the identity of the real pickpocket. Although this threat provokes disgust with the assembled crowd nobody attempts to stop it. The tension is wound tight as it looks like Daigoro is about to receive a savage public beating. Yet the tension is relieved as the real female pickpocket, Oyo, comes forward.

This is another example of a women, thriving while living outside the law (and expectations of a woman) having maternal instincts aroused, thus returning to her expected place and being punished for it. At least that is what we assume will happen. For even though Oyo has come forward Daigoro refuses to identify her and takes the beating after all.

Daigoro stands up for those living outside of the law and although is punished for it eventually receives the admiration of Oyo, those administering the beating and the assembled crowd. Although hard fought, it is very much a victory of living outside the oppressive and unfair laws of feudal Japan and perhaps an indicator that this is a society that is beginning to change its values.

Upon returning to his father, who watched the whole incident with his usual cold stoicism, there is no hint of emotion between them. Yet the camera lingers on father and son's tightly clasped hands for just long enough to show what is really felt. Held against the emotional remoteness found in the rest of the series, this borders on melodrama. It is an emotional moment earned genuinely.

With confused loyalties, plots within plots and moral questioning this presents a very tumultuous and puzzled society. Within this are the children, a generation in peril yet also a hope for the future. During the final confrontation, where Ogami reveals to the Lord's parents he is really there to execute them all, infant Lord and Daigo make funny faces at each other.

It is touching and funny and presents a brief hope that from all this confusion innocence might still prevail.

That hope is almost immediately crushed when the infant Lord coldly orders Ogami and sons execution. After a bloody battle Ogami executes the infant Lord and parents and the world is returned to its harsh and unfair status quo. 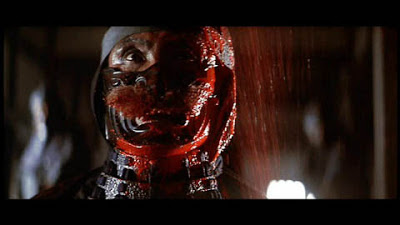 Despite an ingenious underwater assassination and an amazing sword battle with some ninjary types, there is not a lot of fun to be had in this chapter, yet it is possibly one of the most thematically complex and sophisticated of the series.

Another year and a new director results in this, the final film in the series, having a significantly different tone then not only its preceding chapter but the series as a whole.

Gone are the overarching themes and social critiques, this one is just about Ogami facing off against the Yagyu clan that killed his family. 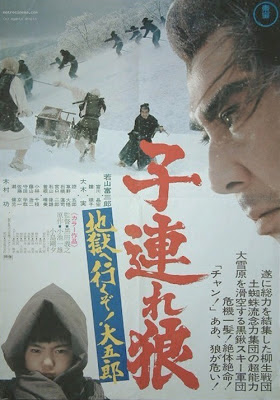 For this director Kuroda cherry-picks the most insane moments from the previous films and adds in a few of his own.  Supernatural assassins primarily.

Ogami's nemesis Retsudo calls on his illegitimate son, raised amongst the beasts in the mountains, to help kill his prey. This son calls upon the black arts of the Demon-Spider clan and uses all manner of supernatural tricks (as well as a bazooka) to hunt down Ogami.

The film becomes, at points, a full-on horror movie. This suggests that Ogami, who has constantly claimed to exist at the gates of the afterlife, might be nearing his end. 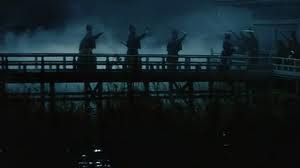 Indeed the entire film builds to the glorious final confrontation where Retsudo and the Yagyu clan face-off against Ogami and son in a snowy wasteland.

What follows is a glorious visual cacophony of swords, bullets, blood and, um, skiing. It is also one of the few scenes that can boast a sledge battle, especially since one of the sledges carries rocket launchers. Yet once the snow has been turned red Retsudo turns and runs, denying us the confrontation the film has been building to. It is something of an anti-climax then and as such we have no resolution to this epic six-part story.

But hey, we had a sledge fight.

The Lone Wolf and Cub manga have been adapted into two TV series, a number of TV movies and have been the influence for other interpretations, for example Road to Perdition (Sam Mendes, 2002). Yet it is this series that really brought the stories to an international audience. They are exciting, ridiculous, sophisticated, intelligent and iconic and another example of Japan using b-movie sensibilities to deliver culturally relevant stories to the world. 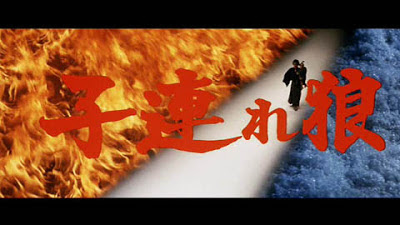