This wonderful little Italian horror starts the way all timeless stories begin; a fashion photographer and his sleazy boss take a number of young female models to an old abandoned castle for a photo shoot.


Yet it is not abandoned at all, but inhabited by the bathrobe wearing ex-boyfriend of one of the models; Travis Anderson. He temporarily allows them to stay and complete their photo shoot, which is captured in vivid detail.

This is quite possibly the most horrifying sequence in the whole film. It is meant, one suspects, to be some form of comedy montage, yet it is neither funny nor strictly a montage. The various moments play out with no real attempt to show the passage of time nor create any greater meaning. In fact there are only about four cuts in the whole five minute sequence. In addition, the awful music that plays in the background (something not unlike what would emit from the demo button of a child's electric organ) appears to be only three seconds long and is cack-handedly looped for the entire duration of this non-montage (or nontage, as I shall call it). Start the clip below at 4:01 and see how far through it you make before vomiting an internal organ.


Since they are shooting one of those torture-based fashion shoots (or perhaps material for a Fumetti?) there are edged devices involved. Some accidents occur and the lives of a couple of models are lost. The caring reaction of the boss? Get on with the shoot. Yep, all the models just forget about their dead friends and plough on. They are nothing if not professional. 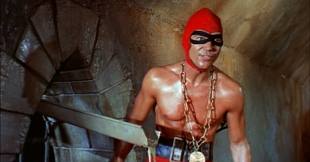 But these deaths were no accident. No, Travis has been possessed by the spirit of The Crimson Executioner (try and imagine a mix of The Phantom, a male stripper and one of the Beastie Boys) and seeks to imprison and torture the models for not being the perfect physical specimen that he is, or something.

There are many ways to read this film. Is it about repressed sexuality (did I mention Travis lives in his castle with a bunch of muscular men in sailor outfits?) returning to the surface as misogynist rage?

Is it a confused,and frankly offensive, condemnation of homosexuality, a celebration of misogyny and a promotion of unrealistic male and female body images?

Is it an attempt, as it claims, to adapt classic literature?

Or is it just a random assortment of poorly conceived images and moments? A pot-pourri of shit ideas, if you will.

To be honest it doesn't matter. Regardless of it's disregard for taste there is a surprising amount of unintentional fun to be had in the Bloody Pit of Horror! 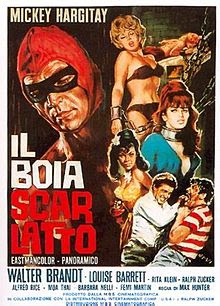