Like the previous two films in the series the next two chapters were both made in 1972. You would be forgiven for thinking that when a film and three of its sequels are all produced in one year that the quality might suffer. Yet the next two chapters in this series prove that these films are not being churned out on a soulless production line.

The third film in the series not only changes tone again, but also changes tone mid-film. As Ogami further descends into the murky underworld of feudal Japan we are introduced to the more subtle layers of society, from 'hired hands' (thugs and bullies hired to protect the rich and powerful) to crime lords.

This allows for the film to examine with more care the way in which the warrior's code (Bushido) is assimilated and regurgitated in all areas of Japanese life. In most cases these codes are easily manipulated so that those with privilege and title, or those that work for them, can get away with the most heinous of crimes while still appearing to be 'honourable'. If this hypocrisy was suggested in the previous two films, then it is fully exposed here.

Yet again it is women who suffer the most. The film's unpleasant opening features the rape of two women (a mother and her daughter) by three of the aforementioned hired hands. They do this knowing full well that once back with their prestigious employer they will be untouchable. Later we are introduced to a young virgin who has been sold into slavery by a local gang. To fulfil her 'contract' she must either allow her first time to be at the hands of a client (thereby earning the gang significant pay) or endure a passage of rites involving drowning and beating.

The gang leader herself is female and on the surface seems a strong character. She is calm, intelligent and respectful and her gang adheres to a strict code not unlike Bushido. Her first meeting with Ogami, where he flatly refuses any of her requests, is a surprising one. Rather than subjecting him to violence
she negotiates a relatively peaceful, and somewhat mutually beneficial, solution. However, it also clear that she views this young girl as her property and is willing to force her into either of the appalling options her social position presents. In other words she is utterly indoctrinated. It is clear from this character that women can only achieve power and strength if they except their place in society, while those that fight back are punished and, since said punishment is carried out within the parameters of the various codes, they have no hope of justice. Yet for all the unpleasantness on screen the film never truly feels exploitative as we are asked to view it with a critical eye.

The film has significantly less action than those before it and the blood-letting is also toned down. So unlike its predecessors it is less badass samurai flick more serious attempt at critiquing the values of this period.

That is until the last twenty minutes when the film goes crayon-eating insane.

Suddenly surrounded by an army of swordsman, archers and musketeers, Ogami unleashes the full power of his cart. With the flick of a bamboo button shields flick into place and a panel at the front of the cart drops revealing a rack of frigging machine guns.

This little wooden tank allows Ogami and son to mow down sixty-plus of the poor sods who charge them. Then Ogami goes to work with his sword and the blood finally rears its splattery little head. As fun as this all is, it is a very jarring shift for a film that has so far been concerned with realism and legitimacy. 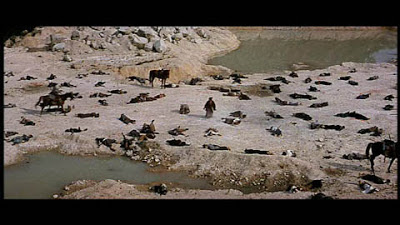 What is also clear in this film is the influence of the Italian western. Both the spaghetti western and the samurai film have always shared common DNA, namely tension building slowly only to erupt into sudden action. Yet here both the music and the use of firearms (even Ogami produces two six-shooters at one point) shows an overt admiration for the genre.

Yet once all this craziness is over we return to the central theme as Ogami and another disgraced samurai duel. They are not enemies, but consider each other honourable rivals and both have fallen foul of their code; being labelled outlaws for doing what they thought right. Babycart in Hades is a schizophrenic film, yet one that despite its muddled tone has a clear theme; that values as a formal structure can result in an exclusive, even oppressive, society.

The first of the series to be headed by a different director, Babycart in Peril remains consistent with the themes that have run through the series so far. 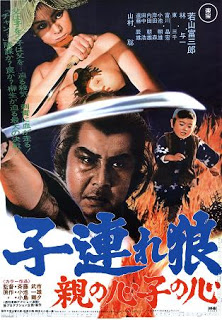 What is most obvious in this chapter is the humanising of Ogami. Here we see his somewhat iron will falter and indestructible body crumble. Initially this is due to the separation of him and Daigoro, his son, at the beginning of the film. Although they are reunited quickly, it is enough to soften the edges of Ogami. It is then we learn a little more of his past, namely that he arose to the position of Executioner through honourable defeat in combat, rather than the skill he is now infamous for. When he is attacked in an abandoned Temple by Yagyu assassins (dressed in grey and faces painted so as to resemble gargoyles) the film takes on a nightmarish quality. During the battle we see these horrific looking assassins from Ogami's perspective; crawling, limbless, bleeding and wailing in agony. It is an unsettling moment and one that suggests that for a split second even Ogami is disturbed by the carnage he has left in his wake. It is a half hour of film that deconstructs the character and leaves him vulnerable to the trials that are to come. 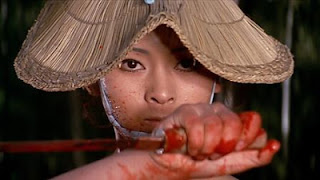 One of the most significant characters in the film is Oyuki, a female short-sword expert enlisted by a clan-lord to be one of his guards. It is a rare occurrence for a women to be offered such a position, yet she suffers sexual abuse at the hands of another guard and flees. Like many of the women in this series, she is punished for not excepting this oppression and becomes an outcast, hunted by the clan for deserting their lord. 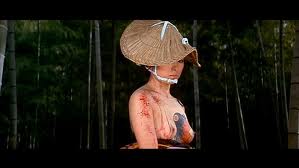 Oyuki is unlike the other women, however, in that she uses her position as outcast to gain revenge. She is tattooed with offensive and shocking images and fights stripped to the waist. This gives her a distinct advantage over her male opponents distracting them with both her sexuality and her refusal to adhere to the image of women deemed acceptable by this society. Her tattooist remarks that the discomfort of a tattoo is a life-long endurance test and so Oyuki literally wears her suffering across her body, a personification of the anguish women suffer in this society.

Ogami is hired to assassinate her and although he carries out his assignment, his vulnerable state means he understands her position and handles her death with far more respect than any other of his victims. Indeed, her death is something of a release and one she is ultimately pleased with.


The final assault from the Yagyu leaves Ogami heavily wounded, his cuts and bruises symbolic of the chinks that have appeared in his emotional armour. Although this film is heavy on action and arterial sprays it is overcast with clouds of doom. Whereas it introduces a new theme of the relationship between parent and child and how that is tested when the two are separated, it also brings a continuing theme of the series to the foreground. The theme that death is not always the worse fate a person can suffer, indeed in many cases it can be desired. This only goes to show how tough an existence these characters endure and casts a shadow of melancholy on an otherwise exciting and action-packed chapter in the Lone Wold and Cub series.