Kaiju: King of the Monsters 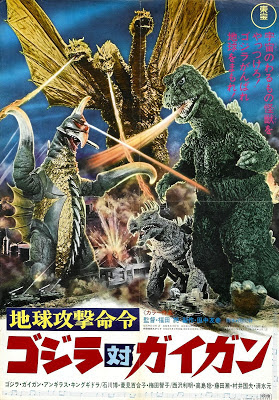 The Kaiju, or 'strange beast', is a staple of Japanese science fiction cinema (or 'Tokusatsu') and, prior to manga, probably the countries most famous cinematic export. To the west the creature most associated with the genre is the big ‘G’ himself, Godzilla. 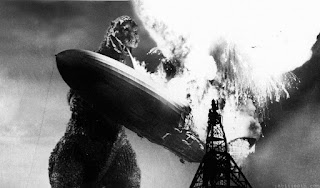 Godzilla (actually 'Gojira') is an enormous radiation-breathing lizoid-o-saur. He first terrorised fleeing residents of Tokyo in Godzilla (Ishirô Honda,1954) but then returned for a further thirty plus films. The series has a somewhat flimsy continuity, with some films being continuations and some, Godzilla: Giant Monster All-out Attack (Shûsuke Kaneko, 2001) for example, being direct sequels to earlier films in the series. Some even start all over again, as if it were Godzilla's first appearance.

More than just a hulking leviathan, Godzilla is also a sodding great allegory. A personification of the destruction caused by the bombs dropped on Japan towards the end of the Second World War, Godzilla is Japan’s way of living out such a devastating cultural milestone through popular entertainment. 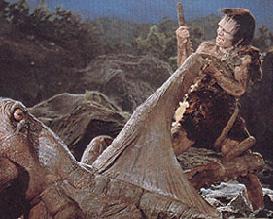 Godzilla isn’t the only monster to deal with the atomic aftermath of Hiroshima and Nagasaki though. Frankenstein Conquers the World aka Frankenstein Vs Baragon (Ishirô Honda,1965) centres around a child, left homeless and feral in the wake of the bomb, who as a result of exposure to radiation mutates into a giant lizard fighting mutant. That is until the random enormous octopus attack that closes the film, whereby he becomes a giant enormous octopus fighting mutant.

This national catharsis could well be integral to forming a huge amount of Japan’s output. Difficult subject matters are dealt with in traditionally whimsical mediums*. Sex, violence and body horror seem fair game to engage with in animation, comics and fantasy film. Kind of like if Cronenberg created a Saturday morning cartoon.

Now, I’m not going to say that cartoons featuring attacking fifty-foot space genitals, or two grown men in rubber lizard suits wrestling over a model city are always intellectually stimulating. But it is so nice to see that on occasion there is a film industry that recognises imagination and intellect aren’t mutually exclusive. More so, when imagination and intellect do collide you are not left with an irregularity, rather something that can reach a mainstream audience.

But let's not overlook the fact these films are fun. Utter bat-shit, ludicrous spillages of insane imaginations splurged onto film in a splatter of light and dinosaur costumes. If you are looking for hot monster action not including Godzilla then might I suggest the magnificent rocket-powered galactic turtle Gamera and, more specifically, the recent trilogy of Gamera: Guardian of the Universe (1995), Gamera 2: Attack of the Legion (1996) Gamera: Revenge of Iris (1999) by Shûsuke Kaneko. These are full of monster battles and the production on display is at times astounding. The last film, however, is a little slow and does show a Kaiju in danger of disappearing up his own rocket-propelled arse.** 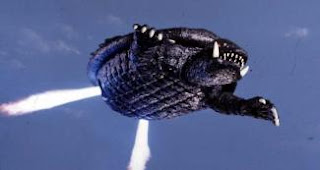 Then there is Ultraman, who adds a pinch of superhero into the monster's bowl. There have been a number of TV series and films, but may I recommend an episode from the original sixties series entitled Cries of the Mummy.

Or, if you like lots of spandex giants on screen at once, Mega Monster Battle: Ultra Galaxy (Koichi Sakamoto, 2009).


But my favourite non Godzilla Kailju is Daijamin (Kimiyoshi Yasuda, 1966), a giant Japanese golem brought to life to wreak terrible revenge on oppressive forces. It is a film made with all the class and integrity of the great Japanese period films and builds genuine tension and atmosphere. The effects are a mixed bag, ranging from some shots with fat blue lines around badly keyed foreground plates, to the rapid-fire cutting between costumed actors, miniatures and composites that don’t give your brain quite enough time to work out how they did it. The monster looks cool too.


When we in the west try our hands at giant monsters we focus more on trying to convince the audience these events could actually take place. Cloverfield (Matt Reeves, 2008), for example, gets you in with the fleeing crowd but loses the joyful frolicking in imagination. The American Godzilla (Roland Emmerich, 1998) looks fine, but it is far from the iconic design of the Japanese original. It's also a little bit shit.

So until Guillermo Del Toro menaces us with his Pacific Rim, or Gareth Edwards shows us his big ‘G’ the Kaiju remains king, smashing us with his rubber fists and sometimes reminding us of our own devastating mistakes. 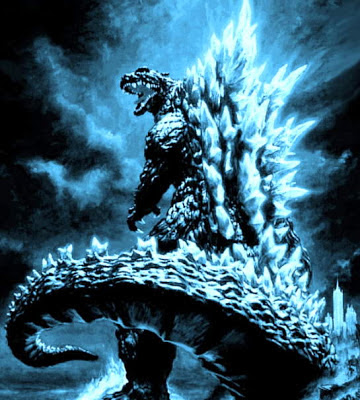 **That is assuming that Gamera also wrote and directed his films.