Her Majesty's Top Gun AKA No. 1 of the Secret Service (Lindsay Shonteff, 1977) 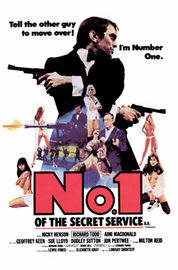 When considering a films potential to entertain, it is often discussed as to whether a film that earns its ability to entertain is more worthy than a film that happens upon it. Should a film that is unintentionally enthralling, most likely through ineptitude, have less value than a film that gets everything right, even if the experience had watching the former is the greater of the two?

This is a discussion that becomes muddied when looking at films that are deliberately bad, asking us to enjoy the farcical production by dipping its nuggets into large blobs of Heinz irony.

Yet I can go one further: How about a film that attempts to be deliberately bad in order to entertain, fails, yet in its failure still manages to be wildly entertaining?

Allow me to introduce Her Majesty's Top Gun, a film which through discussing may open a black hole that will swallow all logic. You have been warned.

Here are the opening credits for your enjoyment (the closing credits are there too, but don't bother with them):

Now, before we do anything else, I would like to begin a campaign to make Givin' it Plenty the theme for the next Bond film. I suggest the visuals that accompany it should be the usual abstract guns and girls, but with Daniel Craig in the foreground marching and fist-pumping in time with the music.

Her Majesty's Top Gun stars Nicky Henson as Charles Bind, NO.1 agent of S.E.X. Despite appearing in many British films Henson will most likely be remembered as the open-shirted lothario trying to sneak a woman into his room in an episode of Fawtly Towers. Henson's Bind is a Bond clone (oh... Bind, I've just got that) but as evident from the opening credits this film is not taking itself too seriously. Everything that is in that sequence actually occurs in the film. And, against all odds, the rest of the film not only lives up to that montage, but betters it. Well, sort of...

Allow me to try and describe an example of the comedy gold this film drapes across its hairy chest with an account of an early scene. Two female soldiers, uniforms unzipped to the navel, do press-ups while their commanding officer watches. The C.O. is given news to which he replies, with one eye on the girls, “Keep me abreast of the situation”.

Now that the tumble weed has passed, I shall continue. This is an attempt to fuse Bond films with the kind of cheeky humour found in the great British farce. Unfortunately, it is entirely witless. Yet so witless is it you cant help but find the groans turning to laughs especially when the so-called gags start to fly at you like machine-gun fire. It transcends its incredibly low ambitions and becomes so utterly hilarious despite its distinct lack of anything resembling comedy. Unless of course they knew that and were producing an ironic take on the ironic spy-spoof sub-genre hybrid? My head hurts.

But what I also love about this film is that it creates (and I apologise if the following terminology is a little too academic to follow) a good list of stuff. I love a good list of stuff. Take G.I.Joe (Stephen Sommers, 2009), for example. I will defend that film until I die. Not on the grounds of quality, but for the very fact they weeded out all the narrative logic and characterisation and filled the space with, well, stuff. Army, lasers, ninjas, jet-packs, ninjas on jet-packs, an underground fortress, master-or-disguises, mad scientists, stormtroopers, men fighting, women fighting, children fighting... and this is merely the first act.

Her Majesty's Top Gun does much the same, filling the screen with such a collection of oddities that it makes you question whether you may have fallen asleep and re-awoken during a different film.

H.M.T.G. contains; spies, an assassin on a dog-leash, a transsexual with metal underpants, Tinker from Lovejoy, an assassin/cowboy so accurate with his pistols he can shave a man by gradually shooting his beard off, John Pertwee shutting his balls in a drawer, a vampire, an invisible force-field, cartwheels and much, much more. I believe someone even catches a bullet in their mouth at one point.

Regardless of its intention or ability, H.M.T.G. is 90 minutes of pure joy. Despite its inability to raise a genuine laugh, its need to please is so evident that you can't help but get swept up in the onslaught of convention bending sequences that unfold before you in an exquisite collage of camp and cool.