There's a subgenre in Eastern animation which consists largely of animated girls being assaulted by demons with phallic tentacles. I mention this as merely an observation, not an approval. Malice@Doll appears to have ideas several stations above this kind of flick, yet also seems to be far too fond of the whole 'tentacle assault' aesthetic to distance itself from the idea completely.

The movie follows Malice, a malfunctioning prostitute robot.. Hell, there must be a neater way of saying that. Prostibot? Robotstitute? Anyway, she's roaming around in a typical post-apocalyptic wasteland. She's leaking fluid from her eyes, and seeking to get it sorted out. See the symbolism? See what they did there? Being a wide-eyed female animated character in a Not-A-Tentacle-Molestation-Film-Honest, she soon gets molested by something with tentacles and rather surprisingly turns into a human being. If only Pinocchio had known it was that easy.

From that point onwards, she wanders around kissing other robots, which turns them into human beings as well. Except it doesn't really, and more often turns them into shambling half-human wrecks. But at least she means well. There are a few more unpleasant bits of business with tentacles here and there, a few discussions on the meaning of humanity and then.. 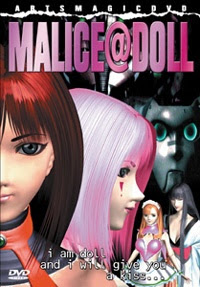 Well, then, on the UK DVD release at least, the damn thing loops, and the DVD is suddenly back at the first scene again. Seeing as there are no opening or closing credits, this appears to be a somewhat underhanded trick to force stoned people or the chronically inattentive to spend the rest of their lives watching Malice@Doll in the misguided belief that it's going to end some day soon.

The animation's really pretty interesting. It's CGI, but designed to look like stop-motion puppet theatre. Although this might sound a bit like a sports car disguising itself as a Skoda, the trick works rather well, and the flick certainly has a unique atmosphere. The virtual sets are pleasingly clanky and oppressive, and there are a few quite remarkable visuals. Despite all this good stuff, however, I really can't see myself recommending it to anybody as anything other than an interesting oddity and a missed opportunity. For all the artistry involved, it still feels pretty grubby.

At the end of the day, you should probably leave Malice@Doll on the shelf unless you're a fanatical animation fan.

Or, of course, an octopus with deeply questionable attitutes towards women.
Labels: Reviews