The Rise of the Diabolikals! 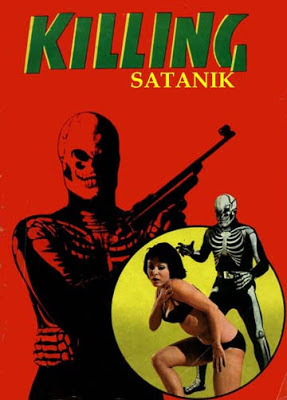 During the 60’s Britain and America were mesmerized by the international exploits of Bond, Flint and the Men from U.N.C.L.E. While their eyes were on the spies a very different type of character emerged from the shadows and into the hearts of other European cultures. These characters had much in common with the super-spy, in that they liked living in luxury, were always surrounded by beautiful and often under-dressed women and had a number of then state-of-the-art toys to play with. The only difference really, is that they were the bad guys. Diabolical ones. 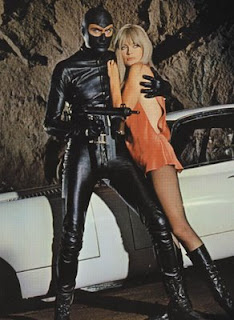 These 'Diabolikals' appeared in a number of forms across Europe but were most successfully crystallised in 1968's Danger: Diabolik. Diabolik was ripped from the pages of the Italian Fumetti and rendered in light by none other than Mario Bava. This marvellously stylish, naughty and, most of all, fun caper centres on Diabolik; a mask-wearing super-thief on a mission to steal anything he can get his hands on. John Phillip Law played him as dashing, handsome and far cooler than the bumbling Police he humiliates with every elaborate heist.

Don’t be fooled into thinking Diabolik is Robin Hood. He either keeps what he steals or gives it to his girlfriend/accomplice Eva and he certainly has no concerns with killing the policemen he routinely thwarts. Despite this we, the audience, are placed firmly on his side hoping he gets away with each daring scheme.

Although Diabolik seems like something of a cult to us, in Europe he achieved some popularity. There is even Diabolik merchandise including toys, a cartoon series and, more recently, a Nintendo DS game.

But Diabolik was far from the only super-villain doing the rounds. Italy also produced Kriminal (1966), and its sequel The Mark of Kriminal (1968). This fellow wore a black one-piece with a yellow skeletal design. 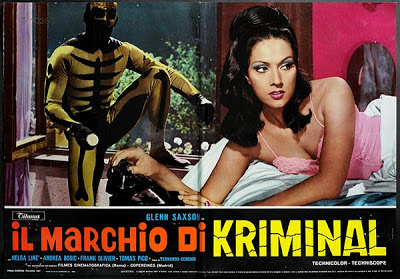 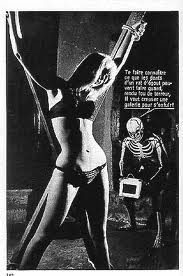 Staying with the Ks we have the equally skeletal Killing, star of the Italian photo-novels, or Fotoromanzi. Rather than steal from the rich, Killing's adventures normally revolved around the capture and torture of half-naked women. Not content with pestering helpless women he also angered the censors, especially when the photo-novels began bordering on pornography. Yet Killing travelled further than most, being renamed Satanik for the French market.

The Turkish, continuing their trend of making unofficial adaptations of foreign franchises, shot no less than three films in 1967 with their version of the character: Kilink in Istanbul, Kilink vs The Flying Man and the gloriously titled Kilink: Strip and Kill. The Turkish Kilink films have had to be reconstructed from old Beta tapes and are patchy at best and although they are far tamer than the Italian photo-novels an intangible sense of sleaze does hang in the air somewhat. 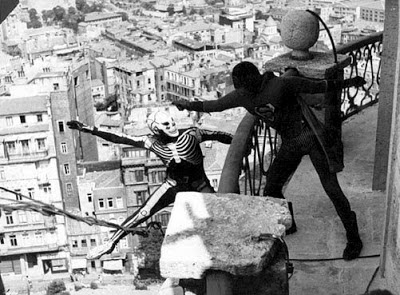 These characters popped up all across Europe, some original and some thinly veiled re-branding of existing characters but all liberally brandishing a letter 'K' where one isn't required. Each of these characters had varying moral standards but were all clearly criminals, if not flat-out terrorists.

Some suggest Europe's pre-occupation with anti-government super-criminals is due to post WW2 trauma. Whereas the British and Americans were celebrating their leaders after the war, some European countries were executing them. A sense of anger and distrust at the government is evident in all the films and has been a continuing subject in Italian cinema. Moving into the seventies we see this subject played out in a more brutal fashion in the Italian Poliziotteschis, a theme also mirrored in the post-vietnam/watergate cinema of America. 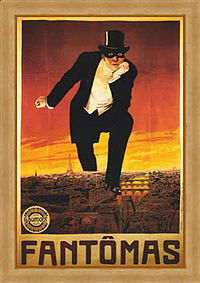 Yet the origins of this type of character can be traced all the way back to the early 1900s in Louis Feuillade's 'Fantomas’ (1913). Fantomas, himself coming back for further adventures in the sixties, was a master of disguise stealing from the French Bourgeoisie. It therefore seems in addition to offering a kind of political catharsis, there is something more timeless and universal that makes this characters appealing. The Diabolikals represent the purist form of escapism. Not just just from reality, but from the law. Even, perhaps, morality itself.

With the exception of Diabolik these films still require a bit of work to track down, yet like all good bad guys the Diabolikals keep coming back from the dead. Christophe Gans is currently working on another Fantomas film, a Danger: Diabolik TV series is in production and Japan has recently produced K-20: The Fiend with Twenty Faces (Shimako Sato, 2008), which isn't explicitly the same kind of character, yet shares many of the same conventions. So whether they be robbing the rich, attacking government or subjecting young women to non-consensual S&M, the Diabolikals will always be there, in the shadows, probably in a lycra one-piece.