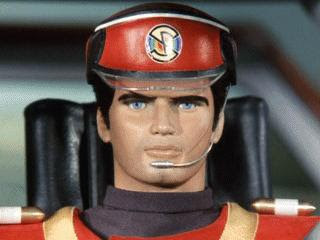 As he tentatively shuffles along the shadowy alley, lit only with sickly yellow and green shafts, the awareness that someone, or something, is following him sets his breath at an unnatural pace. His shoes crunch on wet concrete, setting a languid, yet excruciatingly tense, beat. It is a beat that never builds and the space between each step is a pool of silence from which could leap any kind of terrible surprise. A cat darts through the shadows, sending a tin can clattering across the pavement. He spins instinctively, right into a beam of searing light that burns his eyes. Less than a second later the shrill crack of a bulb lighting attacks his ears. Spotlights blast to life like gunfire riddling him with light. Spinning, he tries to get his bearings. His sight returns almost as quickly as it was taken and there, in front of him, is his scarlet-clad stalker. Without thinking he raises his gun and opens fire on his pursuer. Bullets tear open the man's red tunic, but draws no blood. He looks at his target, hoping for a sign of weakness yet gets nothing but cold, dead eyes back. His adversary slowly raises his own gun and squeezes off one solitary shot. The bullet hits him in the stomach, and as his life spills from the wound he looks for one more sign of emotion in his killer's face. He gets nothing.

And that is how every episode of children's television show Captain Scarlet starts. Seriously, watch:

So I embellished a little, but my intent was to truly sell you how bizarre it is for the main character of a kids show to execute someone in a dank alley in the opening credits every week. Welcome to the world of Captain Scarlet, the coldest son-of-bitch on kids TV.

Gerry Anderson's 1967 action series pitted the Captain and the rest of the Spectrum organisation against the Mysterons, ethereal alien entities that are launching their “war of nerves” on planet Earth. Each attack is carried out by the murder, possession and duplication of an unwitting human. It is this doppelgänger they use to carry out their acts of global sabotage. The only information Spectrum have to go on is a chilling aural warning the Mysterons administer before they carry out their evil deed. So that's terrorism and a little of Freud's Uncanny for you kids.

The Mysterons' proclivity for killing and duplicating means that there is a body count of at least one in every episode (and that's excluding the opening credits). How do they handle such violence I hear you ask? Like this:

Yeah, they just show it. In addition, since Captain Scarlet is indestructible (did I forget to mention that?) he quite often buys the farm in every episode too, only to wake up later completely healed. Even the closing song has lyrics that detail the many ways his body can be smashed into a pulp.

The Mysterons are therefore pretty formidable and as a result some episodes end with them flat-out winning. I've seen at least two cases of this, one in which the president they are trying to assassinate has his Mysteron-controlled plane sent right into the path of another resulting in a big presidenty fireball, while another sees them detonate an arctic base full of workers. In both cases our heroes stand around with a 'WTF?' look on their faces.

Thank the lord for Captain Scarlet then. Our indestructible hero with an equally indestructible moral code. Because when you're dealing with a doppelgänger, any hero truly has to question whether they are now completely alien or whether anything of the original person still remains. If that's a possibility, then surely it is the duty of any hero to find a way to establish that fact in case they might be saved:

Is there a piece of your humanity still in there somewhere? Guess what, Captain Scarlet doesn't give a shit. Look at the guy's face, he might as well be reading his shopping list for all the emotion he gives away.

Six years ago there was a new series of Captain Scarlet which ditched the puppets and some of the iconic design elements and went with a modern, computer generated look. There was some concern in the lead up to the first episode that not only would the sheer craft that went into the original be lost but that the subject matter and attitude of the series would be neutered for a modern audience. Not only was the show pretty good, he still dished out the rough justice when needed. In one episode Scarlet is struggling with another female Mysteron agent in his Spectrum Patrol Vehicle (SPV). Using his indestructible noggin', he forces her outside and slams on the breaks inches before the edge of a canyon sending poor Mrs Mysteron hurtling to what is presumed a fairly splatty end.

Captain Scarlet kills a woman on Saturday morning kids TV, cut to Holly Willoughby and Stephen Mulhern throwing custard pies at each other.

Now I'm aware that the two examples I've given involve women. I'm not trying to say Captain Scarlet has a thing for killing women per-se, it is merely to highlight he doesn't care who or what you are, if you're a Mysteron you're going down. Hard. Captain Scarlet is an equal opportunities sociopath.

So the show is like 24 for kids, with Captain Scarlet the brightly coloured Jack Bauer, smashing alien terrorism wherever it shows its lack-of-a-face.

What, is that it? What does that tell the children who watched it? I mean the shows I grew up with always had a message, quiet literally in many cases. He-Man never left without addressing the camera and telling all the watching children about friendship or some shit. So what is the message that Captain Scarlet offers? Well after some careful consideration I think I have distilled every episode down to this fun yet educational whiskey-shot of knowledge:

“Hi kids, I'm Captain Scarlet. Y'know, there are some bad people in the world. People who don't see you as an innocent child, but rather a viable military target. These people could attack at any time and in any form. It could be your neighbour, your teacher, even your parents. That's right, I'd start keeping a close eye on them if I were you. But don't worry because to fight these evil doers you have me. I won't stop until I've defeated them, or until they destroyed their objective and there is nothing and no-one left to save. It happens sometimes. I don't care, I'm indestructible. They can drop a bomb on you and I'll waltz away without a scratch. Now get out of here before I drop you where you stand just to be on the safe side. Oh, and er... say no to strangers... or... whatever.”
Labels: Articles