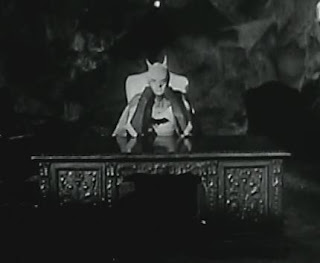 There are times when I wish I were born in a different age. When my Dad talks about the cinema he used to visit as a child it conjures images and feelings in me that I know I won't get to experience myself.

Now this may seem like the perfect juncture to discuss the contrast between the cinema experiences of old and the modern experience; with its high prices, uncomfortable seats, tiny screens and twats. That's a discussion/rant for another time.  No, I have an entirely different agenda here.

For my Dad's generation a night out at the pictures (imagine that, a whole night!) offered a selection of diverse programming. In this selection, nestled before the feature presentation(s) along with the newsreel and the cartoons, sits the cliffhanger serial.

For those not familiar with this format, you take a fully produced film and release it weekly in twenty-minute (more-or-less) episodes. Each episode ends with the central character apparently perishing in a seemingly inescapable death trap.

The most famous of these serials are probably the Flash Gordon/Buck Rogers adaptations featuring Larry 'Buster' Crabbe and although there were many genres my particular field of interest is the superhero cliffhanger. 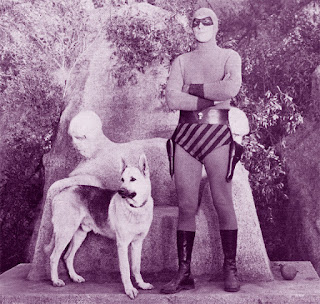 Spy-Smasher, Commando Cody, Captain Marvel and The Green Hornet all had adventures in this format. Batman had two, though the first of these was marred by its anti-japanese rhetoric.  Although it would appear money wasn't exactly thrown at these films (for the most part it seemed locations only ranged from an office, a warehouse and an abandoned mine) the heroes themselves were well realised.  Okay, maybe not Batman.  The Phantom (left), on the other hand, is about as accurate a visual adaptation of the character as you could wish for.

But my favourite of the superhero serials has to be Captain America (yes, him again) by Republic Films. Now purists might balk at this version since some changes have been made. No longer is he Steve Rogers; patriotic weakling turned nazi-smashing super soldier. He's now Grant Gardner; tough district attorney who fights crime with his non-bullshit attitude and gun. When crime gets too tough for these methods he becomes Captain America who fights crime with his no-bullshit attitude and shei... oh, wait... no... also a gun. In fact the only difference between his two identities is that one wears an ill-fitting and conspicuous costume. I'd imagine if, for example, he were giving chase to a saboteur that stopping to change into his costume would only waste valuable time. There is literally no practical value in becoming Captain America. So quite why he's invented this other persona is beyond me.  Maybe he's just insane. In fact, considering the amount of people he flat out kills in Chapter 1:  The Purple Death, this might well be the case.

I mean he punches a guy out of skyscraper window for crying out loud.

But there is some intentional pleasure to be had from this particular serial. The fights are far slicker and more brutal than its contemporaries and the production is impressive throughout, but especially in the inventive cliffhangers themselves. The first cliffhanger we get involves an earthquake ray (or something) going off inside a skyscraper. Check out the embedded video below from 6:50 onwards, it's awesome.

I think this is a format ripe for a comeback. In recent years running times have defined the product, designating something as either a feature or a short, but with the explosion of digital distribution that is still, quite frankly, in its infancy, run-time means nothing. Would I download a weekly ten to twenty minute superhero adventure? Yes I would. Would it be purely for nostalgia. Nope.

A film shot with a TV budget, yet released in short bursts so that it doesn't outstay its welcome and with an irresistible hook that brings you back for more?  I can't help but think that will offer more to a filmmaker with a tiny budget and a huge imagination, not to mention an audience, than a trip down memory lane.
Labels: Articles