Holy shit where do I even start? 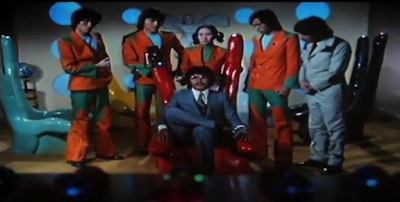 We open with a giant robot emerging from the sea and destroying a passenger liner with a projectile harpoon hand. So far so awesome.

We then jump to Kay, our hero, who is looking wistfully out to sea. I assumed the previous scene was a flashback and that Kay had survived the ordeal, though I may be wrong. I'm not entirely sure how time plays out in this movie.

He is joined by some random dude in glasses who tells him it is time for him to pilot the Super Weapon. He then points to a car that will take him to this weapon whenever he needs to. We have yet to see this Super Weapon but if it is anything like this piece of shit car than we are in for a rough ride. It's a tiny Italian sports car with a massive spoiler on the back and a plastic super-hero as a hood ornament. It looks like someone clumsily spilled a tub of glue into three different Airfix boxes and tried to pass it off as intentional.

Anyway, we then get to meet the villain of the piece; menacingly known only as The Coordinator. When he is not frustrating a small team of admin assistants, as his name would suggest, he is plotting evil plans. Not entirely sure what his evil plan actually is beyond being a dick to the planet Earth. That doesn't matter though 'cos this guy's hair is crazy. Like, PROPER crazy. Picture how crazy you think his hair might be... got it? Now look at the picture at the bottom of this review. You weren't even close were you?

Kay gets driven by the shit-mobile to an underwater base where he jumps into the Super-Weapon (Ah! It's a giant red robot!) who flies out to fight another giant robot. He defeats him with some awesome head and arm spinning much to the chagrin of ole' crazy hair Coordinator.

Confusingly we then cut to Kay, rocking casual denims, hanging out in a field. He is then charged at by five guys in black American Football outfits who engage him in pretty piss-weak martial arts before tying him to a post and kicking explosive footballs at him. Luckily he is saved by an Inspector Clouseau- type on a motorbike that floats in the air because it is tied to a balloon. 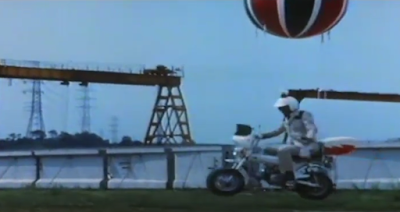 Now look - when I tend to write these lists of crazy stuff I always worry people think I'm exaggerating for comic effect but I swear to you this shit all happens. More than that, it happens in this exact sequence. This is, point-for-point, the first 15 minutes of the movie. I'm as confused as you all and I've actually seen this bastard.

This has all the hallmarks of an Eastern TV series being chopped into a movie for a European release. Some minor digging revealed that my suspicions were mostly correct. Originally a Chinese Ultraman knock-off, the version I saw had not only been chopped into an hour twenty but also dubbed in German THEN subtitled in English. I can't imagine much of the script survived that process but it's even harder to imagine the original featured nuanced wordsmanship.  So how does this final, heavily compromised, version play?

That mad first 15 minutes just carries on, with the big-haired dude being angry, model craft whizzing around over (and sometimes under) water, thugs in football helmets terrorising the denim wonder who escapes only with the arrival of the mysterious Inspector Balloon-bike. This cycle goes on and on without stopping to really explain who is who and why everyone is doing what they do.

It is not without its charm though. The miniature work is good. Not Toho good, mind, but still pretty good. Action scenes are energised through frenetic and borderline abstract editing and camera and while the leaps in narrative bounce you around like a pinball it does mean you never far off a pyrotechnic-heavy battle between two giant robots.

In the final battle the big, bulbous evil robot seems to actually crucify the Super Weapon which suggested to me that this may have been a prolonged Jesus metaphor. Though I don't remember Jesus leaping off of the cross and blowing his enemy up with a flame-thrower lodged in his mouth. Then again at this point the crazy narrative jumble had made the 80-minute runtime feel like a Lord of the Rings Extended Addition so my mental integrity was not at its best.

The whole affair is daft but fun, though I wouldn't blame you at all for bailing after the first 15 minutes.