Cyberpunk is on the verge of a full-blown revival. Weird, because it's ever really gone away - reality is kinda of in the Rise of the Planet of the Apes phase of its own trilogy at this point in time - yet the seemingly never-ending hard-on for the 80s has acted as a gateway drug for the sub-genre. This has had an odd side-effect in that a lot of modern cyberpunk is inextricably connected to a super-slick 80s/neo-noir aesthetic. Now I like synthwave and neon as much as the next nerd but there are plenty more ways to approach these kinds of movies. I have a soft spot, for instance, for gnarly cybernetics than don't quite fit with the flesh. The following three movies are my kind of cyberpunk: DIRTY cyberpunk. 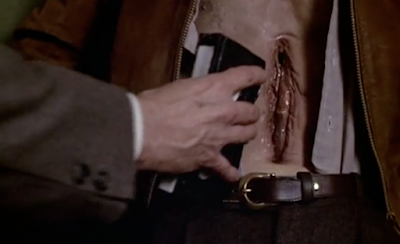 I know I know, why take a movie that is the quintessential example of the Body Horror sub-genre and talk about it as an example of Cyberpunk? Two reasons:

1. Body Horror and Dirty Cyberpunk are very close in subject matter and, as you'll see from the other examples, it is often difficult to separate the two.

2. It's my article, so go fuck yourself.

Switching out human-computer interfaces and slick bionic augmentations for betamax compatible guts and fleshy hand pistols Videodrome is every bit a Cyberpunk movie. Max Renn tunes into a secret video signal broadcasting what appears to be live torture. His desire to hunt the source of the signal down leads to hallucinations and transmogrifications as he is turned into a living weapon, his targets programmed into on pre-recorded video tape that is placed into what I can only describe as a front-loading VCR.

I'd seen the film a long time ago and had lodged it in my teenage mind as essential Body Horror, yet perhaps a little unpalatable for regular viewing. Having re-watched it very recently I don't know what the hell I was thinking. The ideas are still big and the images wet and fleshy but the movie zips by at a brisk 80 minutes. It is a fast-paced, stimulating movie with images of man and machinery interfacing that have not only defined Body Horror but have yet to be bested by Cyberpunk. 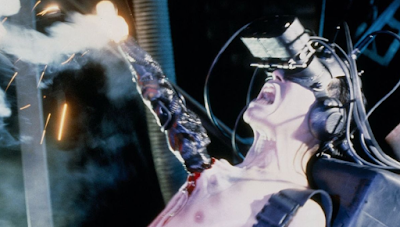 A sequel/remake (in an Evil Dead 2 kind of way) Body Hammer is like Videodrome on performance enhancing drugs. The main character, Tomoo, is shot with an experimental bullet that transforms humans into living arsenals by a gang who is experimenting with the melding of flesh and technology. As he slowly turns into a human tank he uses his powers against the gang.

The first Tetsuo was borderline arthouse and heavily featured stop-motion animation of live action elements. This, along with its stark monochrome cinematography, made it feel like the love-child of Lynch and Svankmajer.

This sequel adds colour and a whole bunch of other editing techniques into the mix resulting in an intoxicating and exhausting work. It's hard to know how to recommend this as it features too much cyborg on cyborg action to feel like an art film while the extensive animation and montage makes it feel two arthouse to please those looking for something along the lines of The Machine Girl.

And yet while most films that fall between two things always struggle to have an identity, Body Hammer  is very much its own thing. It is hysterical, intense, imaginative and not concerned with the anchors of genre convention. Crucially it is never concerned with being cool. Resisting the temptation to go all Robotech with the designs, the technology on display is either bio-mechanical and fleshy or chunky and welded. Towards the end of Tomoo's transformation he looks like an anvil with a face, while henchmen have a gross black rust across their face. You can almost feel the iron pressed against their hearts with every beat, the rust in their lungs with every breath.

The movie satisfies not in the expected ways yet confronts the viewer with so many arresting images it is hard to look back on what you just viewed and fell short-changed. 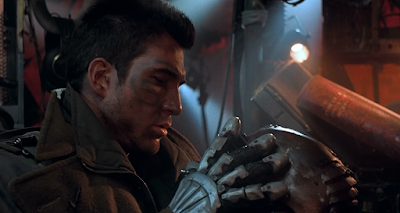 The skin on metal action is less about one embracing technology but more about having it forcefully inserted into one. Of the films above it is the one that has the most conventional Cyberpunk aesthetic and conventions yet is technically the least Cyberpunk of the choices. The problem is here is less about replacing human parts with mechanical ones but whole humans being replaced against their will. Often by drill.

But it is dirty. The world is collapsing, the violence is bloody, the sexuality filthy. Mo, a soldier of fortune with a wicked robot hand, re-visits his kind-of girlfriend Jill who is hunkered down in a secure tower block. Mo is a bit of a dick really and so seeks to soften up Jill by gifting her with a bag of rare robot bits he'd picked up on his journeys in the hope she could use it in one of her sculptures. She does but the robot is a prototype self-repairing droid. The metal bastard rebuilds itself with household items and junk from her metalwork projects and goes after her and her neighbours with drills, saws and a nasty hallucinogenic poison.

The Cyberpunk connection might be slight and the Body Horror elements superficial (injury detail is major and there is one nasty maggot-ridden hand) but there is something about the way flesh and metal come into contact that makes this feel different to your usual killer-robot flick. Every time I watch this movie I am reminded not only how much I love it but how formative a film was for me. It's a clammy, tense, mostly single-location stalk-and-slash coated in a slick film of sweat and machine grease. 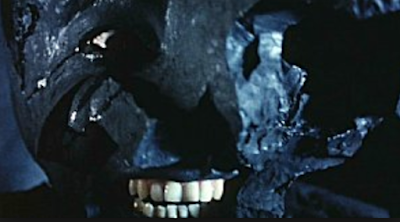 As much as cool-looking visors, Eastern influenced architecture and a palette of hot primary colours define what we currently see as Cyberpunk these movies show another side: an uglier, seedier dystopia full of warped meat enveloping obsolete tech. A faulty future full of analogue punks.
Labels: Triple-Bills