Wicked City is a Chinese live action adaptation of a  Japanese animated series and it is one of the most fun 90 minutes (or so) you can spend in front of a screen. How fun you ask? Well, its opening scene features a gun battle with a prostitute-turned mutant spider-woman that ends in a decapitation. That fun.

It's not uncommon with films of this ilk to have a belter of an opener and then save everything up for the finale and in these cases the lure of a spider-sex worker might not be enough to keep you going through a sluggish middle. Fortunately Wicked City not only keeps the pace up but actually out-does each scene before it. Every moment in this movie is brimming with joyfully absurd choices that to look away, even blink, would deny your eyes cinematic pleasures you wouldn't believe have been committed to film.

Before we go any further, let's have a stab at the plot. A government agency made up of gun-toting psychic detectives are at war with a secret society of raptors; creatures that masquerade as humans but have bizarre and deadly powers. These raptors seem to have been organised into a crime syndicate and are themselves embroiled in a turf war with members of their own gangs. Into the fray bound our two heroes, both anti-raptor agents and both compromised in some way. One is half raptor while the other has fallen in love with a beautiful raptor woman. A beautiful raptor woman named Windy. Rather than explain why they call her this we are instead asked to cast our imaginations beyond the narrative frame to decide whether it is because she is as quiet and graceful as a soft breeze or because she has a serious lack of rectal integrity. World-building I believe it's called.

Many movies feature the battle between government organisations and their supernatural enemies but what makes Wicked City stand out is the powers the raptors possess. They can command cutlery to attack at will, generate laser finger nails, explode limbs and produce glowing fibre optic tendrils. One guy turns into a giant knife to battle a killer clock while mid way through the movie a belly dancer fires cogs as projectile weapons. There is even a scene where a man has sex with a part-woman part-pinball machine creature. Read that last part back. Got it? Man fucks a living pinball machine. If I'd have had anything to do with the marketing of this movie I'd have just written that in bold letters (maybe used Impact as the font) on the VHS cover. 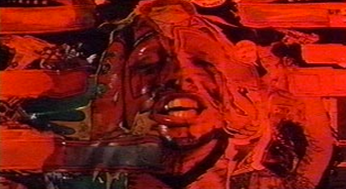 And sex with arcade machines isn't where the weirdness stops! Like I said, this movie just keeps topping its last scene. The same woman (her ability seems to turn into machines with huge sexual appetites) later turns into an erotic lift and tries to ingest our two heroes, who have unwittingly entered her elevator car, in her fleshy semi-vaginal cabin. They are saved at the last minute by a heroic raptor who takes their place and rummages around in the gooey walls of her ascending mecha-vulva until he reconfigures her body into a sexy flesh motorbike. He then proceeds to ride it violently until he casts it/her off the top of a building where it/she burst into flame on impact with the ground. He then screams and goes bald instantly.

That scene would ensure a lifetime of therapy for Sigmund Freud, along with the most complicated stiffy he'd ever experienced.

The movie may be utterly bonkers but it isn't incompetent. The visuals are evocative and the action sequences as thrilling as most early 90s Hong Kong genre movies. In particular there is a genuinely exciting docklands car chase featuring guns, stunts and laser-firing raptors. Even though it ends with the pursued car being shrunk into a tiny toy car and driven between the wheels of the pursuer's vehicle (another raptor power apparently) the sequence still manages to get the blood, and fists, pumping. 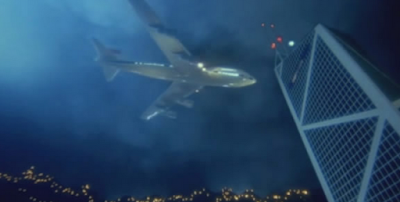 The finale, featuring a tentacle-legged lizard man fighting a Nosferatu-style dude atop a skyscraper and on top of and around an in-flight 747 is an amalgamation of all the movies strengths in one scene. It is at once absurd and brilliant, hilarious and thrilling.

Wicked City is a joyous mess of ideas and tones that brims with energy, imagination and scale. I have no idea what it is about but by god I know I love it.